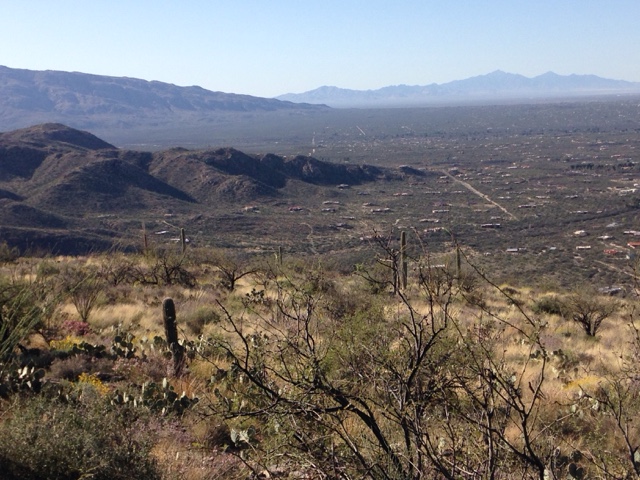 A couple that I met at Buenos Ares NWR asked me if I had driven to Mt. Lemmon and I replied I had not.  They said it is something they enjoyed and I should look at going.
This conversation gave me the precipitous to take the drive up.  This drive takes you to the top of the mountains that act as a backdrop for the city of Tucson. (north of the city)
The picture above was taken from the first ridge overlooking East Tucson. 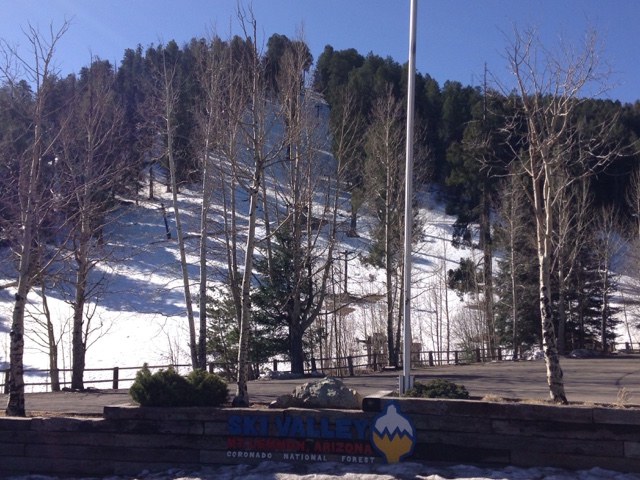 I decided to drive all the way to the top before heading down, stopping along the way.
Above is the ski area but it is not open.  It's on the north side of the mountain to avoid the warm sun.  It isn't a big ski area. 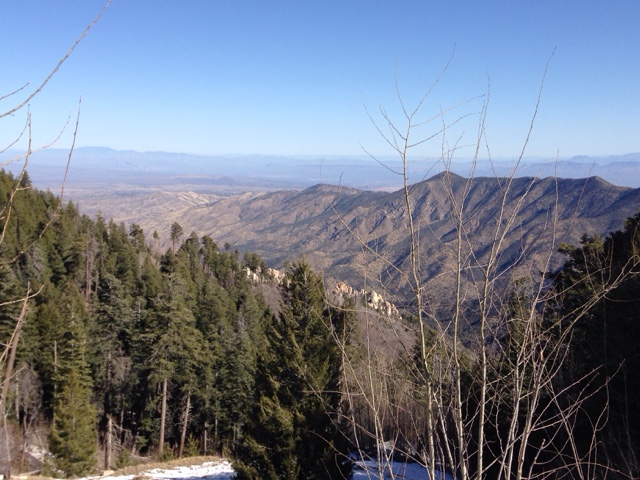 This is the view to the north of Mt. Lemmon. 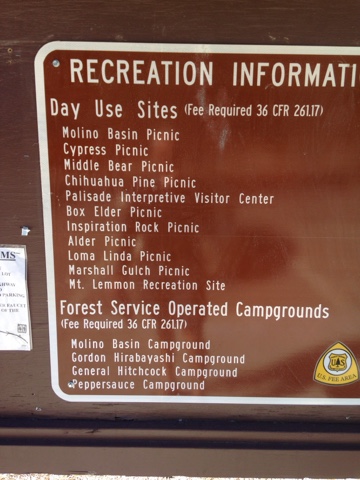 I stopped at the forest service station on the way down, but still near the top.  I wanted to learn about hiking and camping areas.
I met the Forest Service Ranger opening up for the day.  I asked her about what was open for trails and camping and she said hiking was open on all trails, but only the two lower campgrounds are open.  she explained that as it warmed up the lower campgrounds would close and the upper ones would open around April 1.
I then asked about animal encounters on the trails and she said that two woman were out on a trail and encountered a mountain lion.  They made themselves big and there was a stare down for awhile and the mountain lion left.  They reported the encounter so the animal ranger and he went out to check and he found the mountain lion and it approached him so they killed it and it tested positive for rabies.
We talked for awhile until another customer came in and I was on my way.  I find the Federal employees great resources for Informaiton and they too like the conversations that they get from the people they meet. 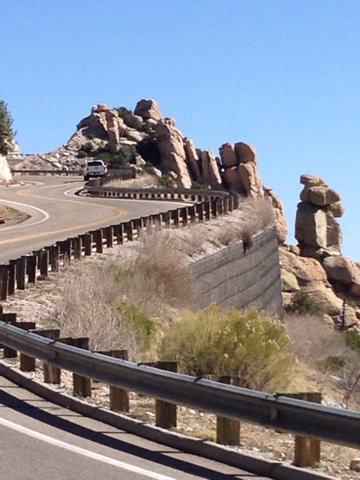 Coming out of the forest area at higher elevations you pass these rock formations. 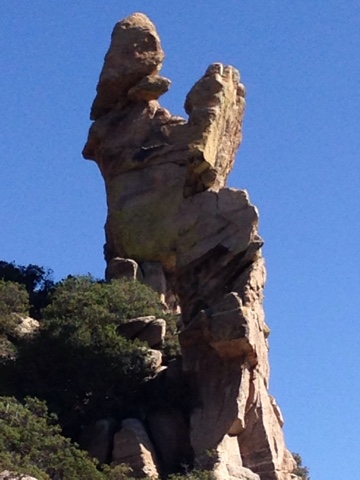 You have to wonder how they stay up there. 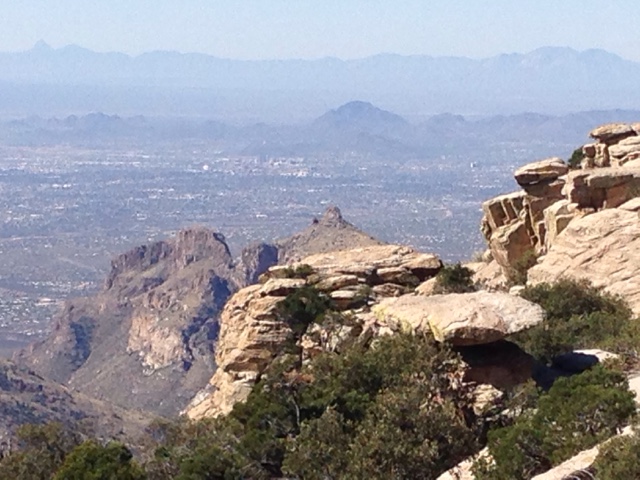 I stopped at this overlook at is the most popular spot on the road.  I met 3 woman, all related.  Two 40 somethings and a teenager.  I was asked to take some pictures of them, which I was glad to oblige.
They were visiting from, I believe, Ohio and on their way up the mountain road.  I did get to talk for awhile with one about presidential politics and found her like minded to my thoughts.  I don't tend to discuss politics in passing but for some reason it came up and just happened we found ourselves agreeing with each other.
It's always fun to meet people on the trip, but even more fun to talk to a few a bit longer, when those conversations are more substantive.
They were looking for a hike later so I recommended Douglas Spring Trail that wasn't far from the road up the mountain.  I hope they found it and had a good hike.  I like that trail as its not too strenuous and there are plenty of flowers this time of year. 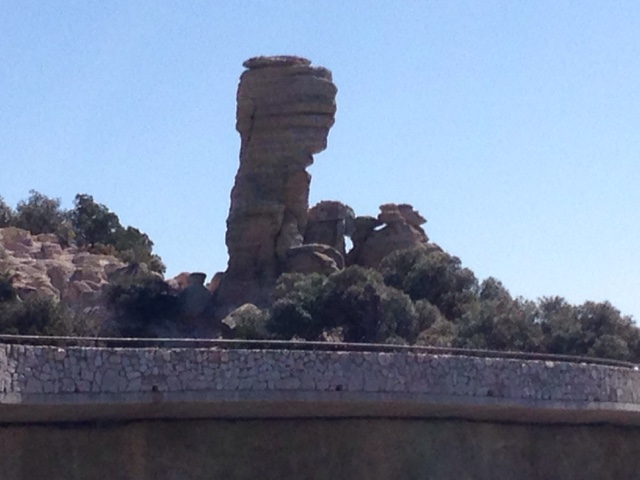 This is a formation across the street. 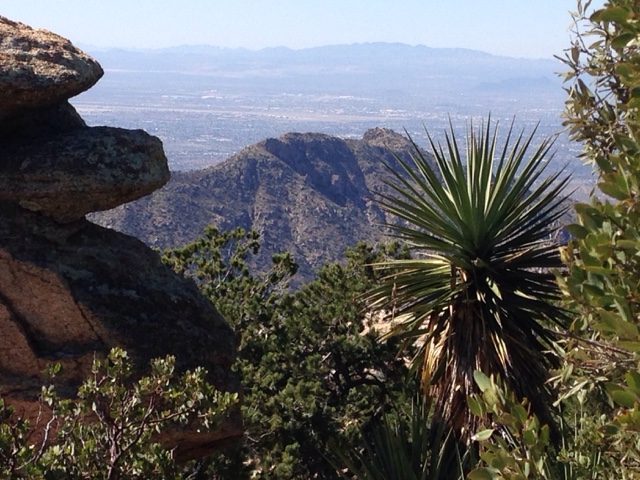 Here is my attempt at a more artistic picture, framing the distance.
If you come to Tucson.  Take the drive up to Mount Lemmon it is enjoyable.
Brent
macaloney@hotmail.com
Posted by Brent’s Travels at 4:00 PM