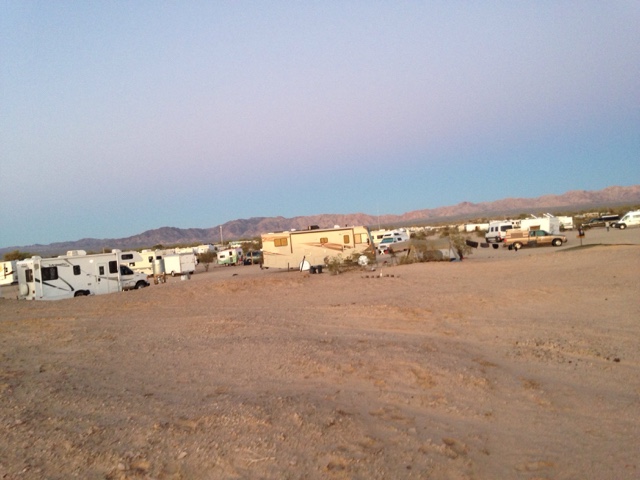 Before we all left the RTR gathering in Quartzsite, AZ there were subgroups that were forming to disburse to other places.  One was "The Slabs" for the month of February.  I knew I was going to Monterey, CA to visit the west coast son and family the beginning of February so I didn't know if I would link up with the group at the slabs.
That is why I spent 3 nights at the slabs before heading to Monterey.  The problem was that I didn't get to partake in the weekend social aspects of the slabs. 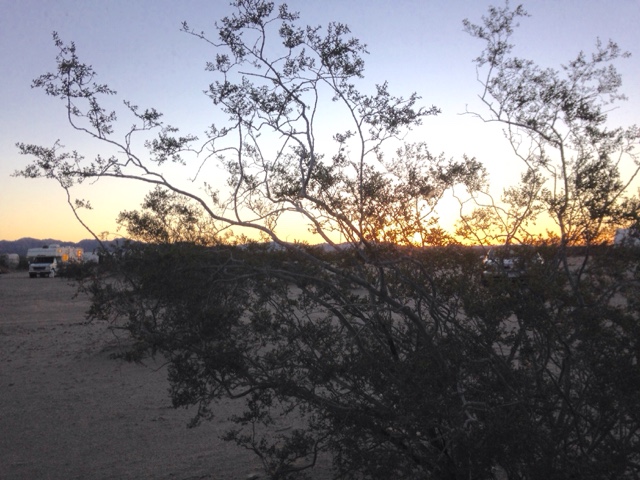 To recall, I was delayed Friday 5th (Day 33) leaving Monterey due to needing a new tire, so by the time I arrived at the slabs Friday evening it was well after dark.
The organizer CB had given GPS coordinates and they were very close to where I stayed before Monterey.  There is no electricity or streetlights at the slabs, so after a bit I found a trailer that I recognized of someone I met at the  RTR and parked right there.
Then I went looking to find people from the group.  At the second campfire I arrived at I found the group.  Some I knew and others I didn't.
It was nice to see Hollywood Bob (HB) at the fire as we spent some time talking at the RTR in Quartzsite, and he remembered me.  He is a semi-retired videographer and has been to the slabs 4 years running now, so he knows the ropes.
Luckily HB, who had just upgraded to a Class A from a Class C, in the last two weeks, offered to take me around Saturday morning to a few places that I had not been when I was there the first time.
First, was the local LOWs group that we were parked near.  Loaners On Wheels.
When we stopped by the LOWs, where HB is a member, they were having morning coffee around a campfire surrounded by solid panels to help block visibility until you got close enough.  HB introduced me to the group and I got a worm welcome.
Then it was on the PALs group, where HB is also a member. Folks were out of their rigs for morning coffee too and I got introduced to a few there also.
Both The LOWs and PALs have club trailers with TV, books, games and they often have group meals.
The folks were all nice and are about my age.  They are not the young more colorful personalities that live there too. 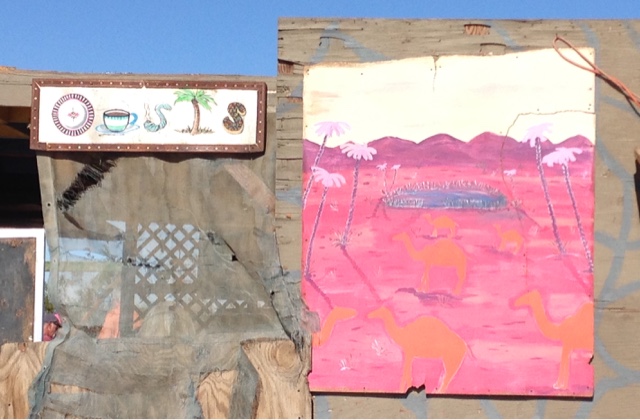 After our visit to the LOWs & PALs we stopped by the Oasis Club where HB gets his 2nd morning coffee and I try to figure out and absorb everything.  There is no coin bucket to pay but there is a monthly fee as most are not transients.
Then it was time to go to the Niland Tomato Festival Parade.  HB gave me a ride. (See separate blog post on the small but colorful parade) 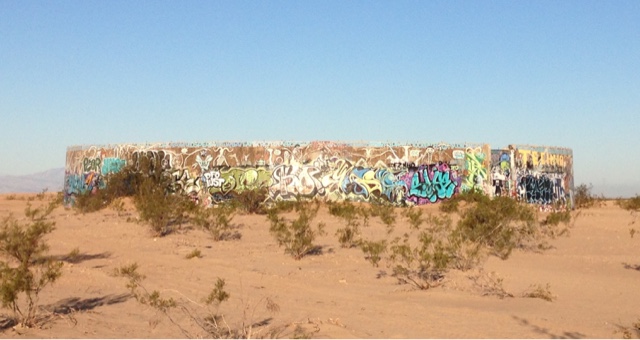 When I got back to the slabs from the Parade I took a hike in the desert to these old concrete water tanks that now have been colorfully painted and tagged. The reason for the the road heading that way as Tank Road. 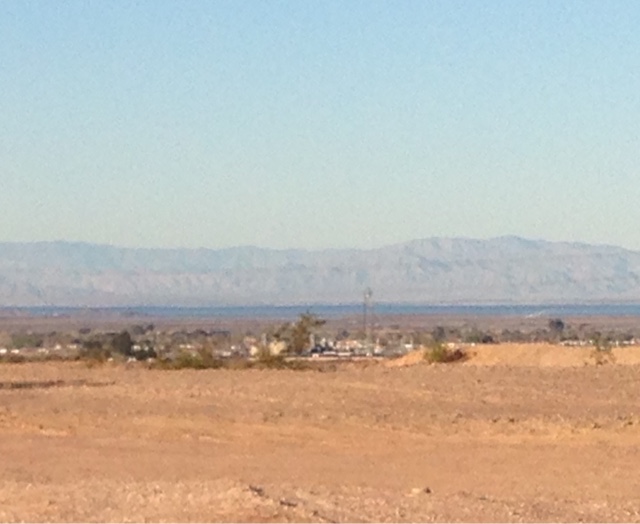 The tanks are on a bluff where you can see the town of Niland, CA, 3 miles away and the Salton Sea further in the distance. 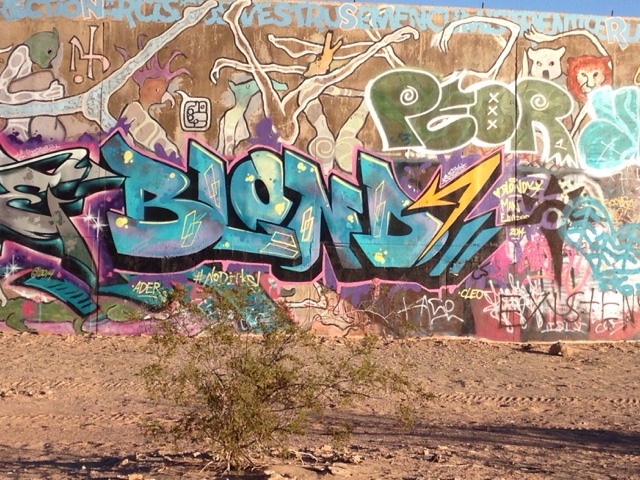 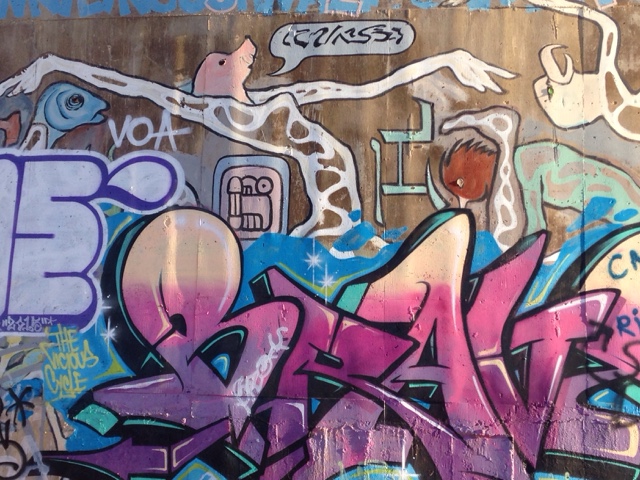 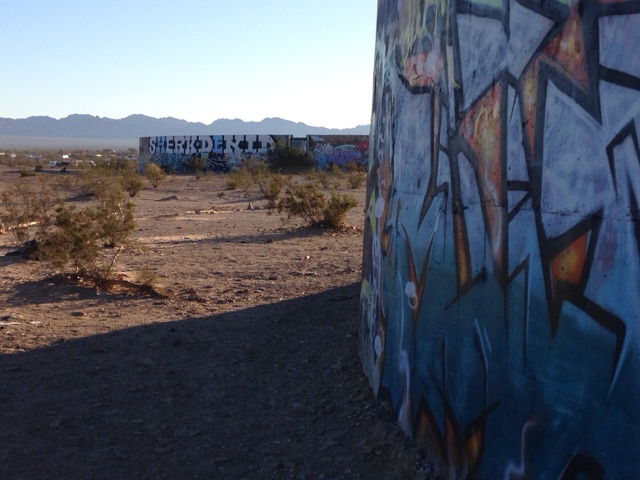 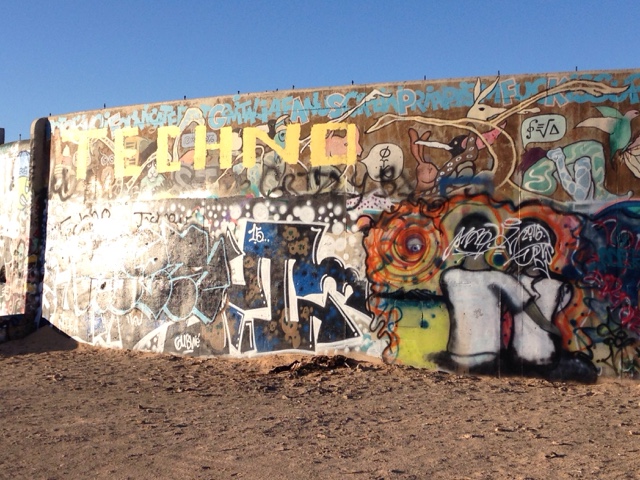 Above are some of the various paintings on the tanks.
When I got back to my car the guy that had approached me a couple weeks before walked by at some distance and he went out of his way to look and wave and I returned the gesture.  I guess he's better with me now that he must figure I'm not a cop or something taking pictures. 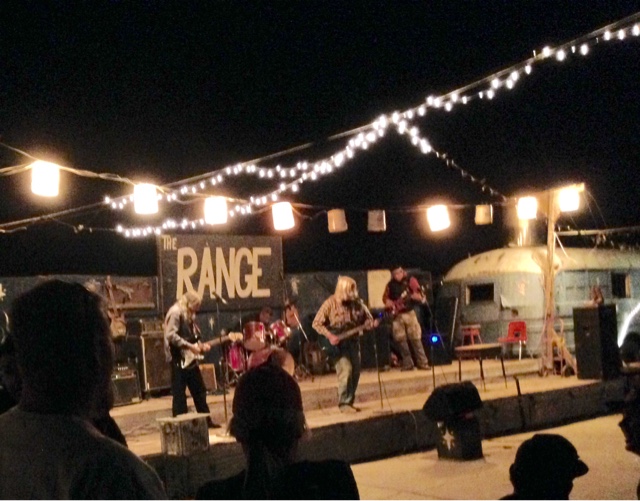 I had dinner and it was dusk and time to head to The Range club for the Saturday night festivities.
Bands and singers go on stage and do their thing playing music and singing while a couple hundred or more people dressed in all sorts of ways or themes dance, drink, eat, sit, and talk. Or whatever.
On the front of the stage is a donation bucket, then a dance floor in front, on one of the old concrete slabs left over from when it was a Marine Post/Base.
There is a large number of ratty old sofas and stuffed chairs that sit outside. Also here are some wooden benches and people bring their own chairs, possibly passing the sofa's that had long lost their luster for household usage.
There is a bar stage left that sells soft drinks and cooks hamburgers.
Many if not most have brought their own libations.
Some of the group drove over to the Range, but I walked and hooked up with two 20 something brothers that are tenting as they walked to the Range too.
They are walking from LA to the Carolina's and hitched a ride to the slabs by a guy that was coming here.
As I was talking to one brother, while attendees gathered, a 40 something woman came up to us and was very talkative and appeared to be "enjoying herself".  She starts telling us how rich she and her husband are and how privileged a childhood she had and now lives near Palm Springs.  She was repeating herself with the same theme but eventually got to the point that she had been talking to people here tonight that have no money and possessions, that live here in happiness.  Here epiphany that she was trying to get ou and having a hard time doing it was that she found that happiness isn't wealth that she had, but it's the way you live life.  Yes she got religion that night of some sort.
The three of us were standing there and she pulls a guy standing to my left over believing we were together.  I'll call him Louis (not his real name) from Ottawa, Canada.  She pulled him in the conversation, but he was mostly quiet, as her talking consumed most of the air around us, while the bands played on.
Her husband came by to collect his excited wife and he didnt seem to be having what she was having.
I now was left with Louis from Ottawa as the hiking brother seemed to be done with the intense conversation with the enlightened woman.
Louis is 50 something and left Ottawa for a road trip to the southwest US without a plan.  He started out living out of motels until his money was getting used up too fast ($1.40 CA to $1.00 US exchange rate)
He then started sleeping in his car and becoming what we call a vandweller.  He met a guy in Yuma, AZ that plays at the Range in a band, but he was in Mexico tonight and told Louis to come to the Range and there he was without a plan.
We talked for some time about our respective travels before both deciding we were good on seeing and hearing what the Range had to offer.  I asked him where he was parking for the night and gave him suggestions.  One was to park next to me.  He took me up on the offer and have me a ride back to my car for the night. 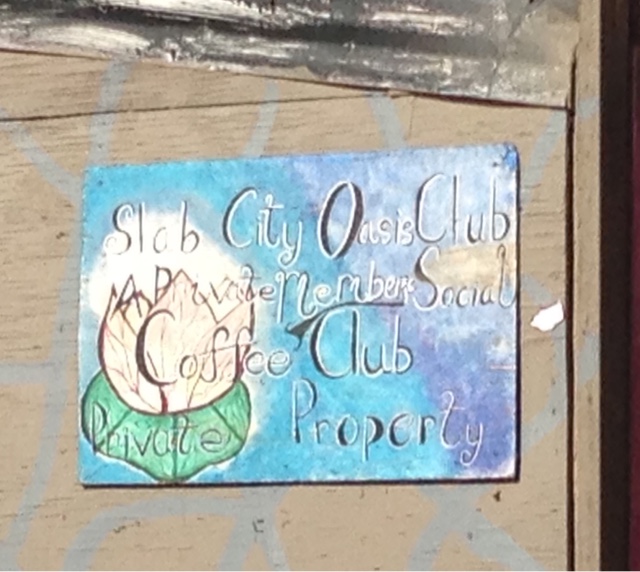 The next morning I'm up and Louis gets up and we hit off talking some more.  The RTR folks had planned to head over to the Oasis for Sunday morning breakfast so I invite Louis to tag along. I eat fruit and sometimes cereal for breakfast so I decided to go for the comradery at the Oasis Club and Louis wanted to come along.  Louis wasn't interested in anything other than coffee.
We sat with folks from the RTR and some PALs that I had met the day before, and some new folks.  There was a long line for the breakfast burrito served with rice on the side.
We were entertained by 4 different guitarists, one was very colorful animated 20 something.
After breakfast Louis drove and I took him to the Hot Springs where we met more Canadians.  On the way we went by the old guard shack of concrete with the same 20 something guitarist now on top playing and dancing.  We give the peace sign as we drove by.
Then it was off to East Jesus where he left 2 mini TV's that were just consuming space in his car that didn't have enough room trying to live in his car.
We drove around a bit more to see where the Hostel, Internet cafe and library are located.
We then came back to where I was parked.  He had been complaining that the back seat seat belts were jabbing him in the side as he tried to sleep all crunched up on the back seat.
I convinced him to redesign his car to make a bed where he could sleep straight.  He did it by folding down the rear passenger side and pushing the passenger front seat forward and filling in the void left wet wren the front and back.
It worked, but he has too much stuff.  He brings an oil pan to change his own oil.  He has a full spare and not the donut tire that goes underneath the car so it had to go inside.  His suitcase is a fixed size so as he uses clothing he consumes extra space, and so on.
He told me that it must have been meant for us to meet to help him with dwelling in his vehicle since I have have experience. 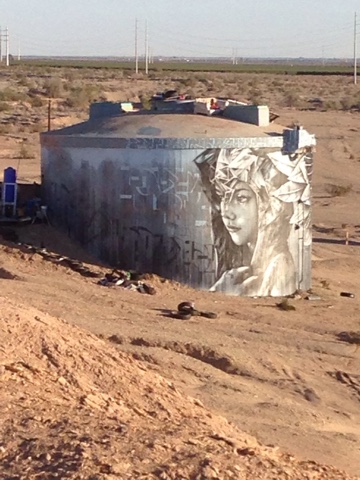 Sunday before dark and while the super bowl was on, Louis came with me for another walk in the desert past the other water tanks to this other one tucked in by the embankment that had a large mural.
It presents itself with a sense of precision artistry.  The mural with such beauty stands in significant contrast to the trash and oddity that exists at the slabs.
Brent
macaloney@hotmail.com
Posted by Brent’s Travels at 4:58 PM