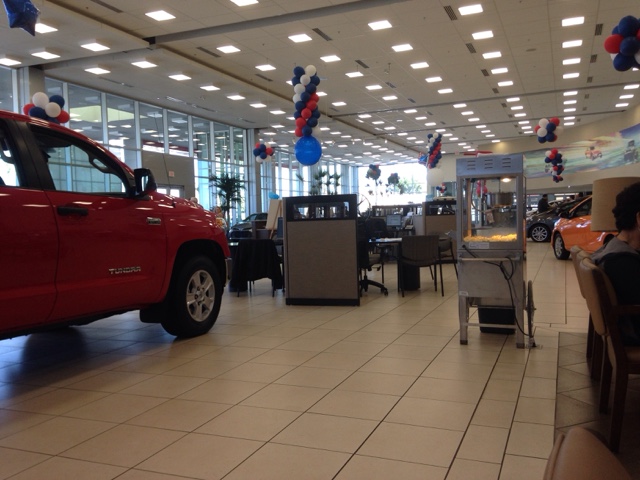 It was time for another 5,000 mile service on my Prius for my Travels this year. It was early Monday, 2/22/16 (Day 50).
I have usually gone to the other Toyota dealer, Precision Toyota, but a few weeks ago when I was there they wanted to give me "green service" for $106.00 before taxes and I used the online coupon from their competition, Desert Toyota to bring the cost down.
Before I drove to Desert Toyota I called Precision Toyota service and asked what the cost was for synthetic oil change for my Prius with tire rotation and was told $106.00.  I then asked how much for just the oil change and was told &106.00.  My response was "Really?" Then said thank you and hung up and drove to Desert Toyota. 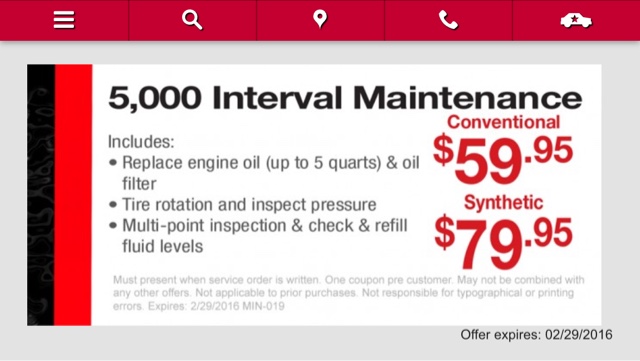 Desert Toyota is a modern building with the similar service where you drive up and a service attendant checks you in.
I requested the service on the coupon above for synthetic oil and showed the coupon.  No problem.
You may remember my post about my previous Prius service this year that there was a list of recommendations that they recommended I do.  One was I should have an alignment.
This is the only recommendation that Desert Toyota had for me.  They showed me a printout that my Prius rear end was out of alignment only a little.  The agent told me that it's a machine to just get an idea if the alignment was out and that the real machine would determine alignment more accurately.
The young lad came and got me as he was taking the Prius through the car wash they have and my drivers side mirror got bumped and it scuffed a small spot.
I felt bad for him and told the service rep that I appreciated the honesty, and she told me he was new.  I've made plenty of mistakes in my life so I wasn't going to make it an issue for him.
The body shop guy came over and offered to buff it and the service supervisor also offered to buy a new back painted to the color.  I accepted the buff and declined the cover replacement.
It was now 10:00 am and they had time to check and do the work the the afternoon and asked if I could come back at 2:00 pm.
I agreed knowing the importance of alignment on tires.  I knew of a disc golf course near by to spend some time.
I came back at 2:00 and a half hour later the agent told me that they put my car on the actual alignment machine and my alignment was not off so I was good to go without additional costs.
I feel I was treated fairly by Desert Toyota as I was originally by Precision Toyota.  I figured I could have used Desert Toyota's coupon at Prevision Toyota but if I was to do that I would be fair to Desert Toyota.
If Desert Toyota doesn't have coupons in the future I will need to find another place to have my service done at a reasonable price.
Brent
macaloney@hotmail.com
Posted by Brent’s Travels at 12:44 PM