Fireworks Over Havasu - "They Won't Disappoint." 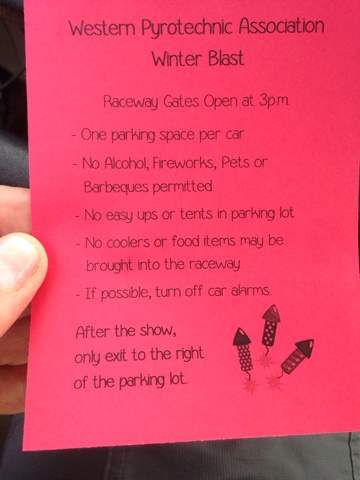 While planning my 2016 Travels I knew I would be stopping by the Lake Havasu area and I added the fireworks show they have there to my calendar.
Here is the online listing of the show.  http://www.golakehavasu.com/events/details/1584/27th-annual-western-winter-blast-pyrotechnics-show/
From the listing it sounded like a great event to go to so I made my way up to Havasu City on Friday 2/12 (Day 40) and looked around a bit and stayed on BLM land in the area.
I arrived in Havasu mid afternoon Friday and by the time night fell on us the BLM area where I parked was packed with vehicles and some tempers flared about people parking to close to others.
I had my camping spot staked out in the afternoon and  didn't care if I had folks around me.
My childhood friend, who lives here, also told me that the fireworks would not disappoint when I told her I was coming to town.
She recommended Sunday night but I was free Saturday so that's when I went, but kept open going a second time on Sunday too. 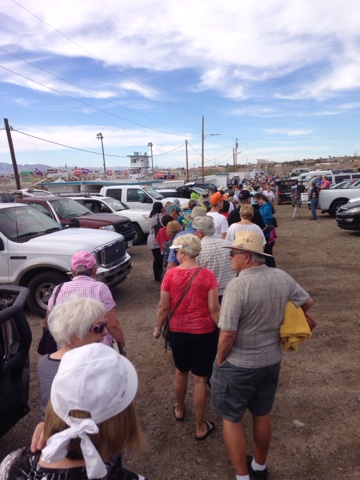 It's 3:15 and the fireworks show doesn't start until 7:30 and look at the line to get in.
It's $5.00 per vehicle and $5.00 pp to get into the race track viewing area where they set off the fireworks.
I got my ticket to get into the viewing area by making a deal with a woman next to me as the line we were in was to get into the viewing area and neither of us had yet gotten tickets.
I held her place while she got hers and she did the same for me.  She went and got her spot in the bleaches but I did not do the same as it was now 4 hours before the main event.
I decided I would take my chances getting a seat closer to the start of the fireworks.  I went back to my Prius Campervan where I have everything I needed to tailgate.  So, with drinks and food I passed my time sitting in my comfy Prius until just after 6:30. 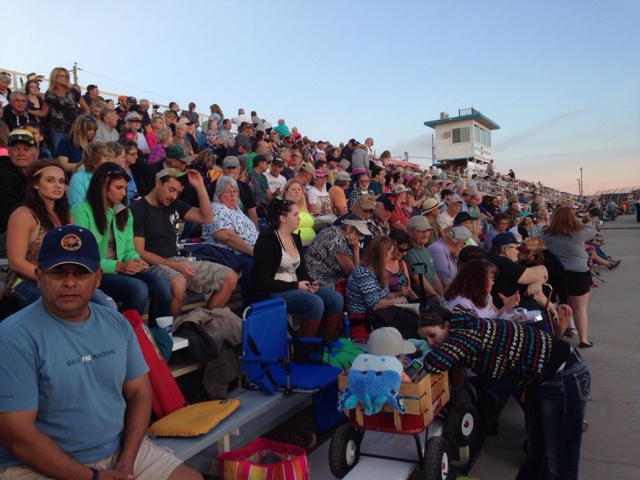 I went back inside and look at the crowds in the stadium seating.  This doesn't include the people inlawn chairs in the wings.
I walked along the length of the stadium seating and I found what appeared to be an open seat in the last set of bleachers and I asked if there was a single seat there and got the yes.
I sat next to folks from Minnesota. The guy who offered the seat was retired Navy and we were both pleased with the weather we were having here not back home.
We chatted for some time before the show.  In actuality, there are random fireworks going off since about 3:30. 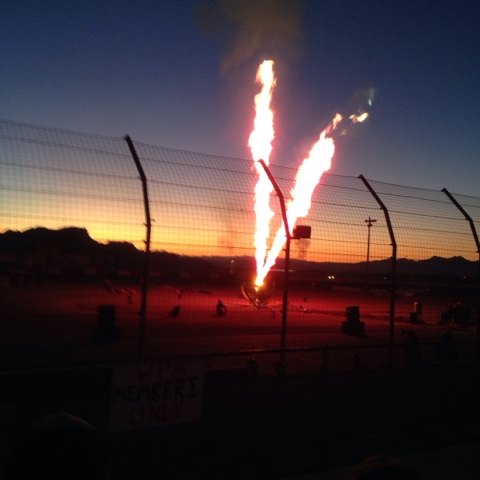 We were first entertained by what they called a lotus blossom that ejects a flame up to 150 feet. 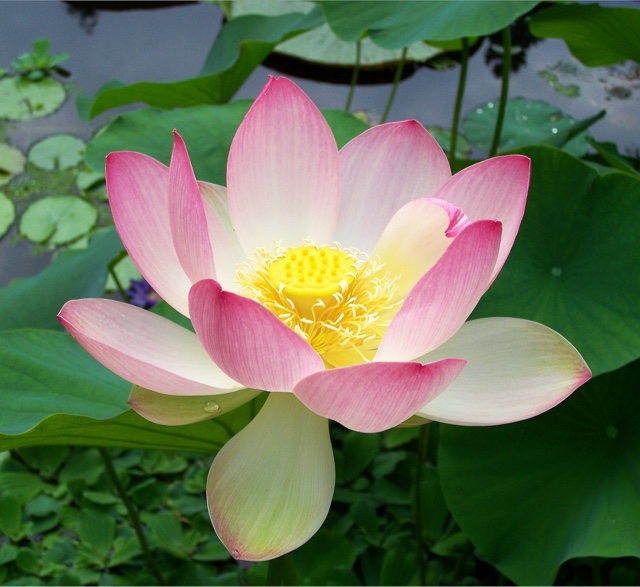 (Wikipedia image of lotus blossom)
You can't see what the flame is coming from as its dark but it's a metal contraption that looks and opens like this lotus blossom. 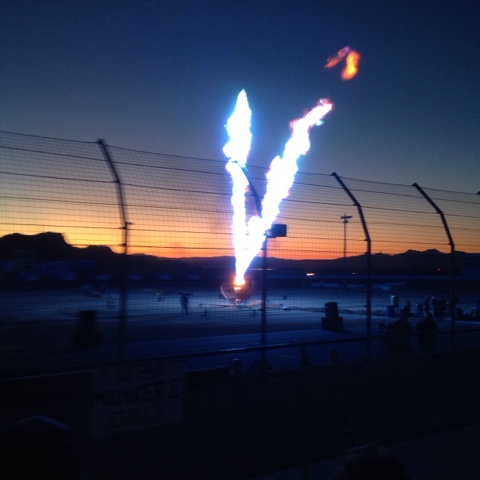 They can change the color and go from a single flame that is vertical or switch to angled or both. 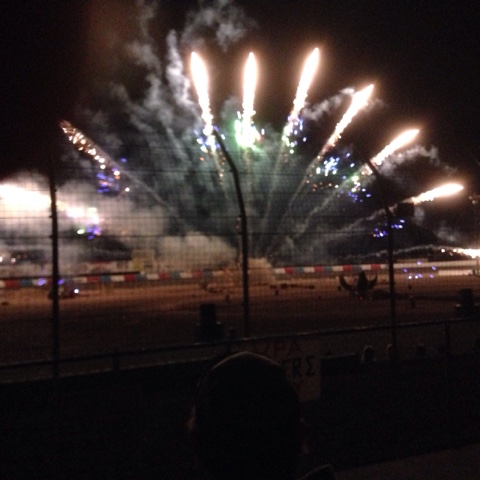 I found it hard to take pictures of the fireworks display. There were so many different types.
The one above is a 180 degree rapid succession fireworks that forms a fan. 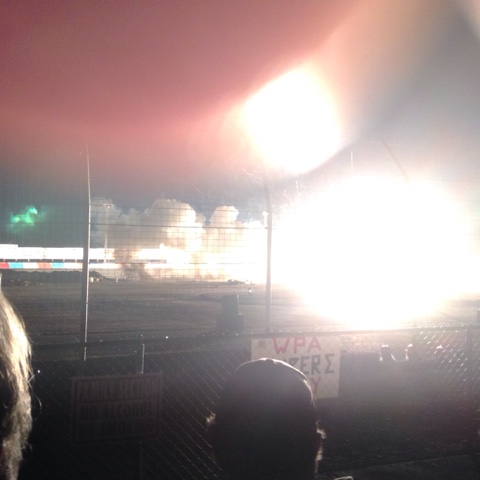 I don't know what this was called but it was a long line of continuous explosions that were exceedingly loud and you could feel the heat. 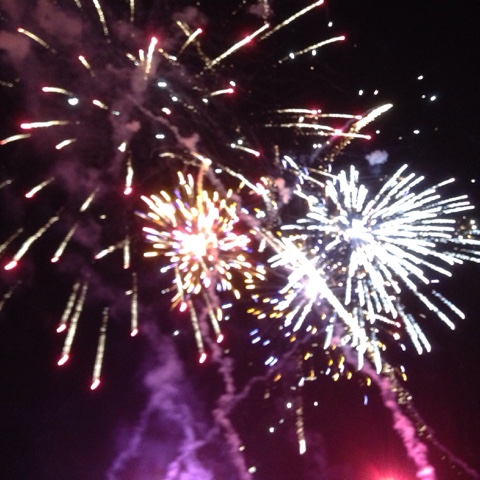 Every type of aerial displays was set off too.  This show was a 1 hour grand finale display that was even better than that! 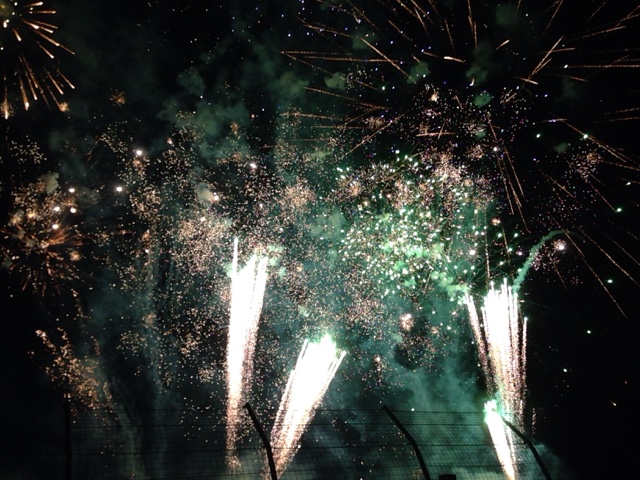 Sitting in the stands you are only a few hundred feet away from where they set many of the displays off.
When I was a kid my family used to take my sister and me to the Fourth of July fireworks in the adjacent city.  In those days there was no protective fence.
We parked so close and put a blanket on the hood and layer on it facing up and i could feel the explosions through my body.  We were that close here too.  Being a retired fire chief we were closer than what we are allowed in MA. 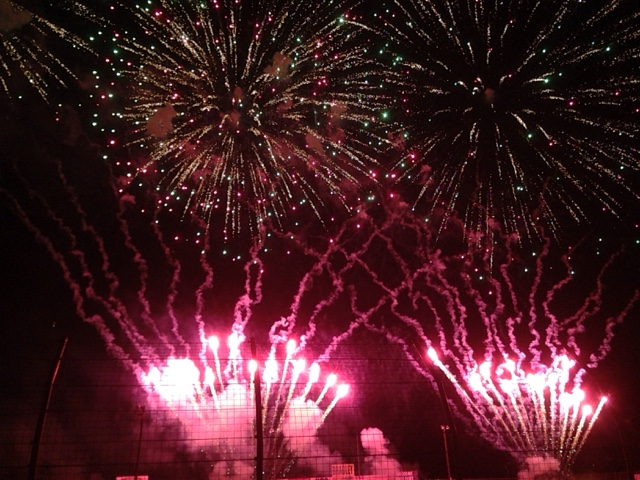 We were so close that my pictures miss the displays to either side of my camera lens. 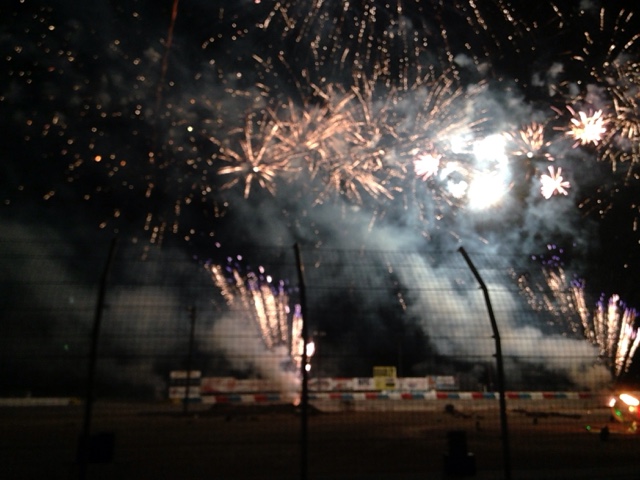 I spoke with a number of people that had come in the past and watched from an adjacent distant hill and felt they missed out.
That's correct folks.  The ground display can't be seen at a distance and you miss out not being close.  You will not get the experience.
These displays are unique.  They had many aerial displays I could not capture.  There was one that exploded in the sky and down floats whirly lit things.  There were aerial displays with all kinds of shapes and colors.
The fireworks association members try to outdo themselves.  There were compputer timed displays with music.  Not one song but song after song it went on and on until I was mesmerized.  I gave up trying to take pictures so I could just absorb it all.
I usually go to various types of shows and watch them intently.  I seldom show expression as I am so intent.  I found myself here with a smile from ear to ear, I was having so much fun and enjoying the whole experience.
After the official show has completed they continue to set off fireworks randomly until about 11:00.  I stayed for an extra 1/2 hour to let the parking lot to clear. 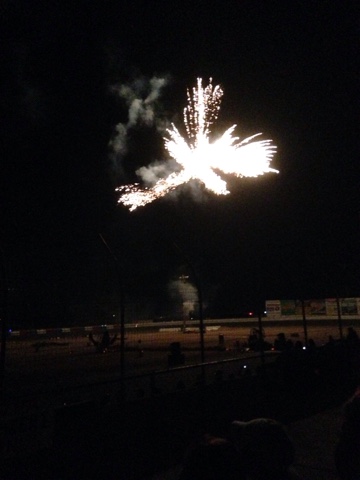 Having had such a good time on Saturday I contemplated going Sunday too, as the show is different with different company sponsors.
Sunday was very windy all day with gusts 25 - 30 mph and I decided to pass on attending Sunday night as it was so windy it would have had an impact on the show.  Saturday was perfect with 3 mph at showtime.  Just enough to carry away the smoke to see the display.
I did talk to a woman who didn't like the show.  She told me that we were too close to the displays sitting in the stands and that she needed to bend her neck to look up.  In parting she said if she came back she would want to be way back so she could take it all in,
I understand her point but I also enjoyed the intensity of being closer.
I highly recommend the Western Pyrotechnics Association fireworks experience if you are ever out this way mid February visit the sunny warm Lake Havasu area.  As my friend said to me "You won't be disappointed." She was right.
Brent
macaloney@hotmail.com
Posted by Brent’s Travels at 8:54 AM