Slab City AKA "The Slabs" 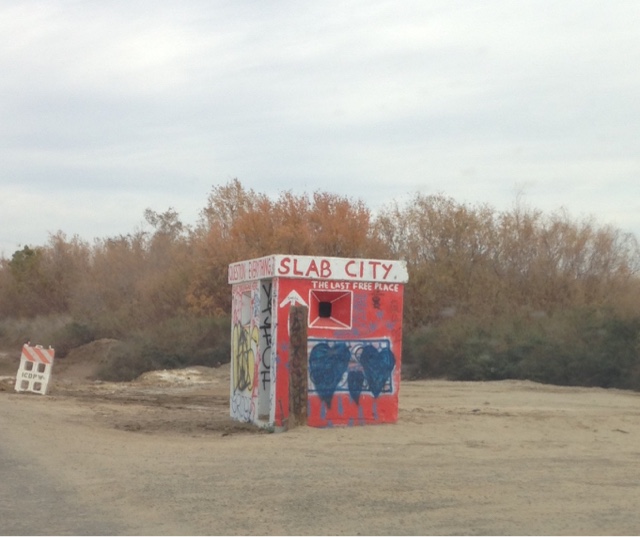 I had learned about "The Slabs" at the RTR as some spoke of coming here during February.  There was a meeting of interested vandwellers so I went but my travels will have me further north in CA for the first half of the month.
Because of my interest I decided to come here in case I don't make it back to this area the second half of February.
The Slabs is also a good jumping off point to visiting the Salton Sea Area and I could also use it for a day trip to Algodones, Mexico although being a bit far at a 2 hour ride each way.
Upon entering the approximately one square mile piece of land affectionate called The Slabs you see what apprars to be an old military guardhouse sitting lonely on the side occur road cheerfully painted.
The Slabs was once s Millitary installation for the Marines headed off to World War II.  It was abandoned and buildings torn down before the lances given to the State of California. The roads and streets remain the same with only a few alterations, although no infrastructure improvements.
When the buildings were torn down concrete slabs were left hence the name The Slabs or Slab City.  The early gathers used the slabs for a base for their abode, many that are trailers.  See web link below for further detail. 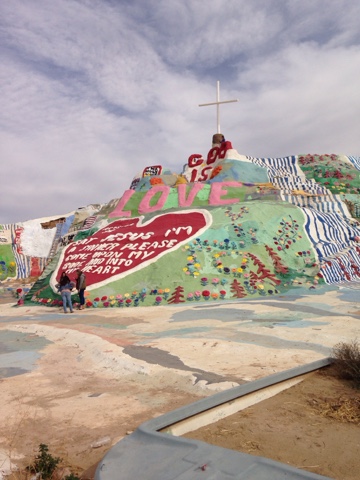 The first thing you see headed in on Beal Road from Niland, CA are a few people disburse camping off the main road.  Then rising above the rest of the slabs is Salvation Mountain on the right.  See separate web blog on Salvation Mountain. 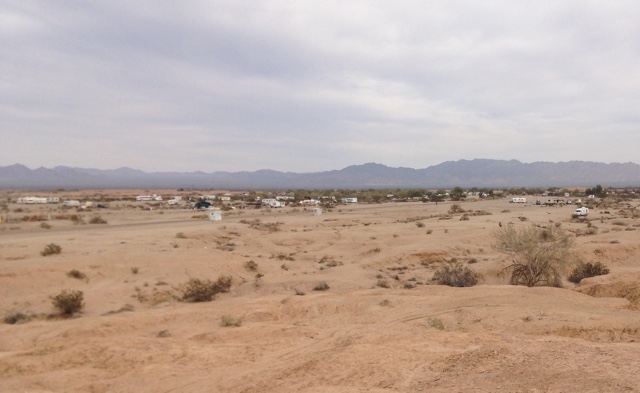 As you travel further into the complex there are more disbursed campers, some with elaborate and at times ornate setups or compounds. One has a plethora of shipping pallets as a fence.  Many others use old tires to mark boundaries.  Still others giving an expectation of their return a sign saying "Taken". 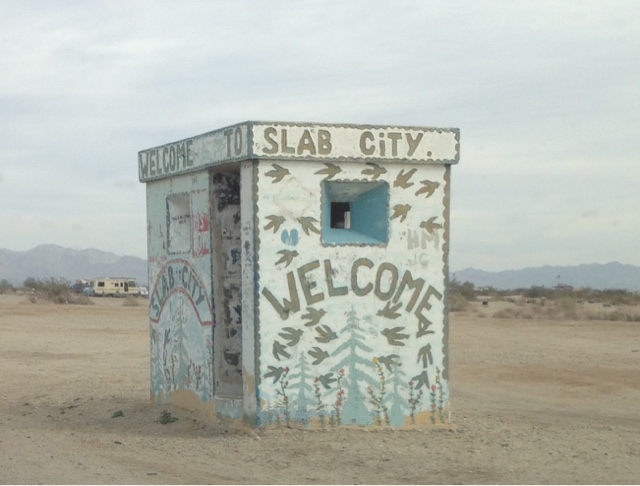 Another building that appears to have been a guard shack at one time is now the welcome building.
A short ways further on the same side is a 3 sided wood building where there are postings.  There was one posting about an upcoming meeting on various issues.  I likened the posting to a town meeting of sorts to address issues common to the folks that live here. 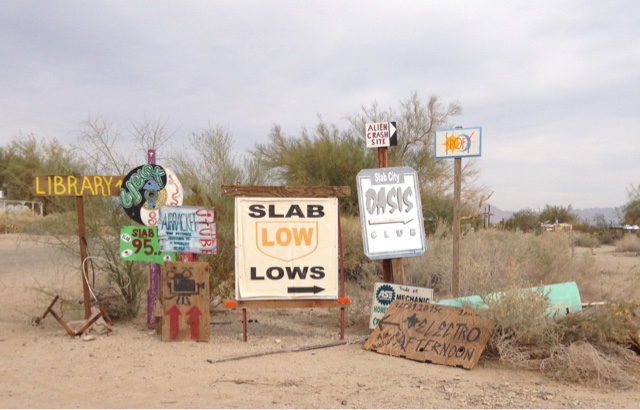 As you continue past many dwellers and increasing more trash here and three you come to the Low Road intersection where makeshift signs point to groups and a few business that grew up here from need.
There is even a low power radio station that plays music during the day. 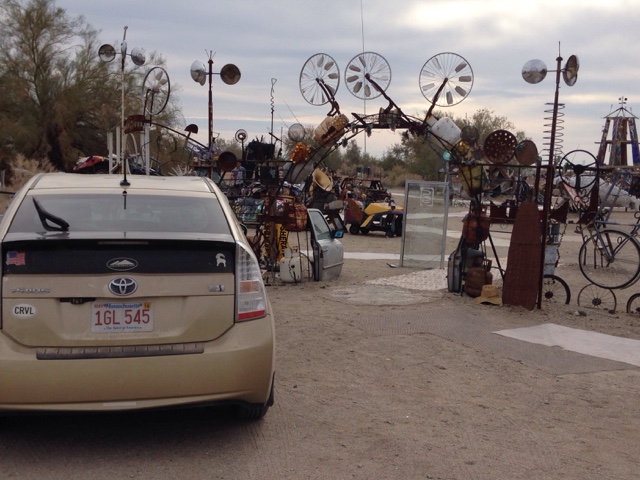 Yet further down Beal Road to the end and then to the left there is East Jesus.
East Jesus is a artist compound where art is made from artifacts and trash of all kinds.  See separate blog post about East Jesus. 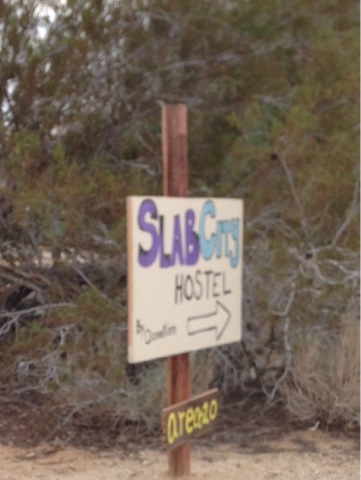 Instead of going left at the end of Beal Riad if you take a right You will come across this sign pointing to a hostel. 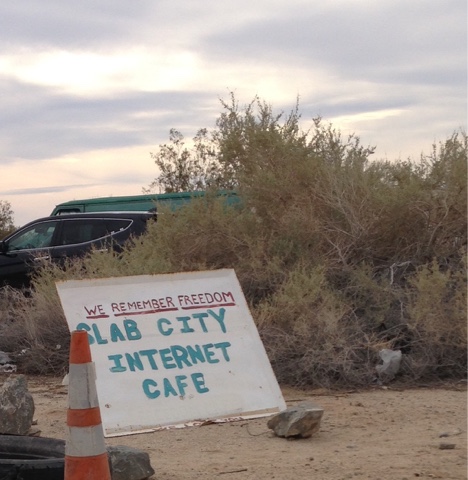 Further down is the sign is for the Internet cafe. 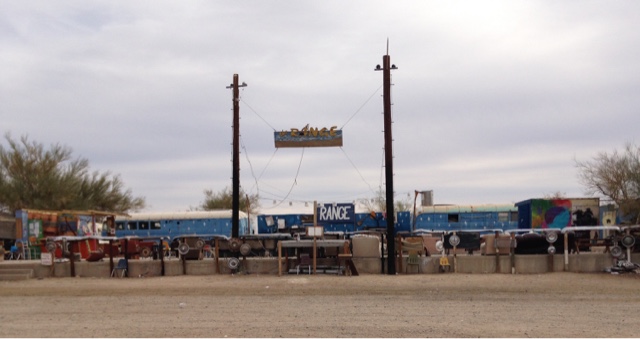 Above is The Range nightclub on a concrete slab on Beal Road.
There is also the Oasis Club that has music and some food on Low Road.  The Oasis Club comes up on Google Maps as well as Slab City.
I didn't go to any of the business establishments mentioned above as most times I passed by I could not detect  and patronage.
In the case of Range I understand that they have live music on Saturday night.
The Nights I was there I could hear live music at Oasis Club from my parking spot, but didn't feel comfortable trying to walk there with no defined streets where I disbursed camped and people being so extremely private.
What would be a community without a Library, so there is one of those here too. 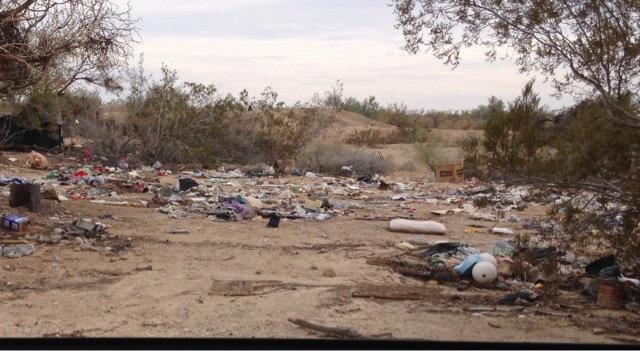 People in person at the RTR and online reports have both indicated that there is a lot of trash around Slab City and here is a picture of one of a number of places with trash.  There are also some sites with trailers with trash around them.  I am not aware that proplevlivevin the trailers with trash around them.
There was also discussion about the area being sketchy because of the people that live there.  There was also some who indicated that it may be lawless.  Each day I have been here I have seen county police.  I also saw a border patrol car leaving as I was coming in.  So, it's not lawless. 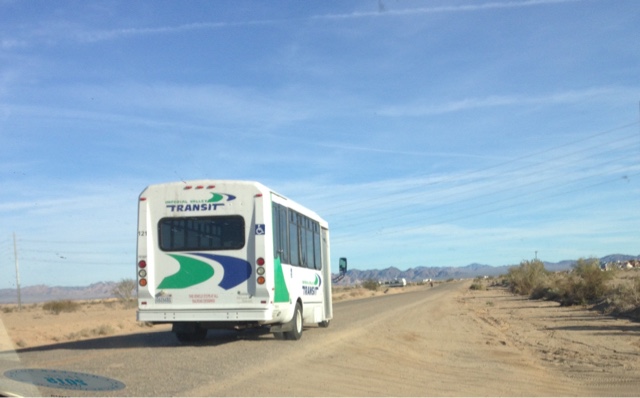 As I was leaving the Slabs bout 8:00 there were a half a dozen people sitting on a slab at the corner of Beal and Low Roads and I didn't know what they were waiting for and then I had stopped to check out the hot springs there and this regional transit bus heads in, and I suspect that this bus brings people to Brawley, CA 20 minutes south of the Slabs.
Speaking of the hot springs there.  I stopped to check it out and I noticed a half dozen people sitting what I suspect is the entrance to go use it to wash.  I opted no to see what it's about due to how sensitive the people that live there are about their privacy.
This is why you see no pictures of people in their living socializing settings and no close ups of what they live in.  More on that in another blog.
Lastly there are a number of reports online about the possibility of the State selling the land out from under the people that live here.  Here is an article:  Will Slab City Remain The Last Free Place in America. http://www.kpbs.org/news/2015/apr/15/will-slab-city-remain-last-free-place-america/
Other concerns are around crime.  There are any number of online webpages with concerns about theft, drugs, and people looking for money.
While here at The Slabs I don't leave my car in attended and go off walking, but there are many other nicer RVs than my Prius but it makes sense to not look for trouble. I was not asked for money, but was asked for... Yea other blog posting.
I know I draw more attention in my car than I would of with my old Class B.  I will cover my personal feelings about Slab City in a separate post.
More about Slab City online
http://www.motherearthliving.com/green-living/design-for-life-slab-city-where-freedoms-still-free.aspx
https://en.m.wikipedia.org/wiki/Slab_City
http://www.natedamm.com/slab-city-why-im-going-back-and-a-brief-history/
Brent
macaloney@hotmail.com
Posted by Brent’s Travels at 9:26 PM