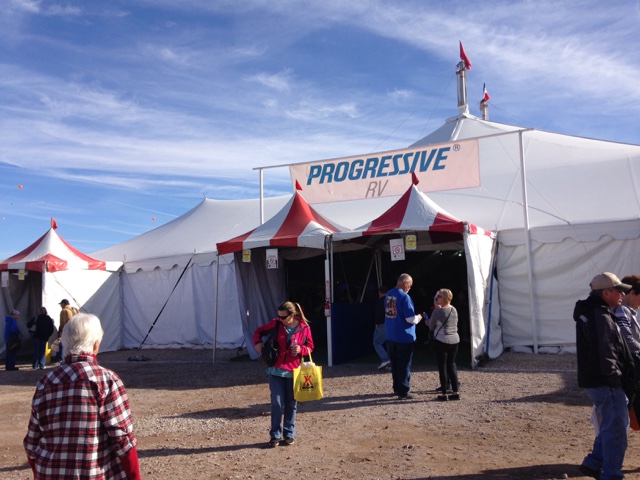 "The Big Tent" is in reality a big vendor show with all kinds of products and services for people that RV.
I liken this event to a county fair but rather than vendors selling things for your home, they focus on RVs and camping and there are no carnaval rides and games.
I arrive the first day (Saturday) of "The Bug Tent" at 10:00, after my morning group walk at 8:30 to 9:39.  The tent doors opened at 9:00.  I was told it would get real crowded in the tent on the first day and if I wanted to spend time looking the experience would be better on Monday as there would be less people.  I wanted the experience with all the people as I wasn't looking for anything at the show as this is one good reason for having a Prius.
I parked on the other side of RT95 and walked to the tent as traffic was building to park next to the tent. 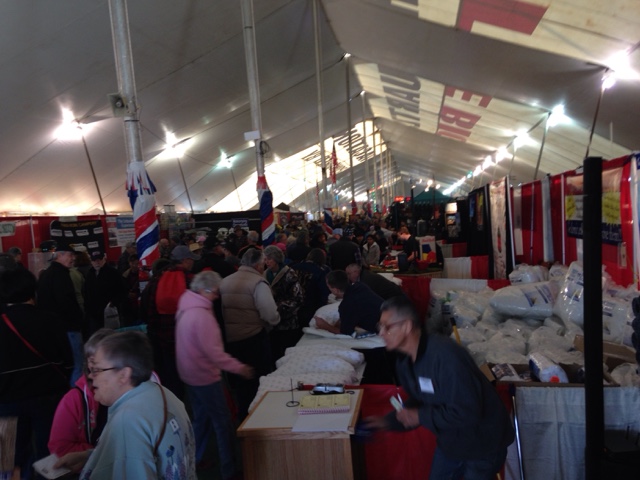 There is one main center walkway the length of the tent and two side isles.
My arrival put me with the early crowd and I wasn't that hard to move around initially. 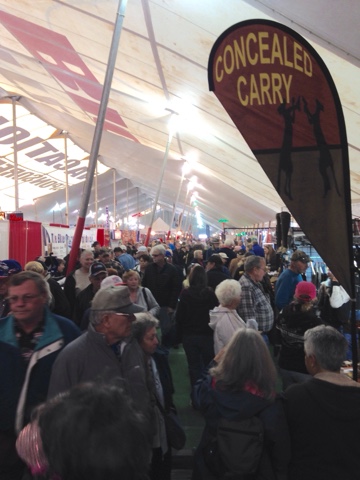 On either side of the tent are additional isles with vendors.
As I was leaving the tent after an hour it became difficult to walk around as people with dogs would stop and sniff each other, people would just stop in the walkway uncercerned about others, and groups of people wanted to stay together. 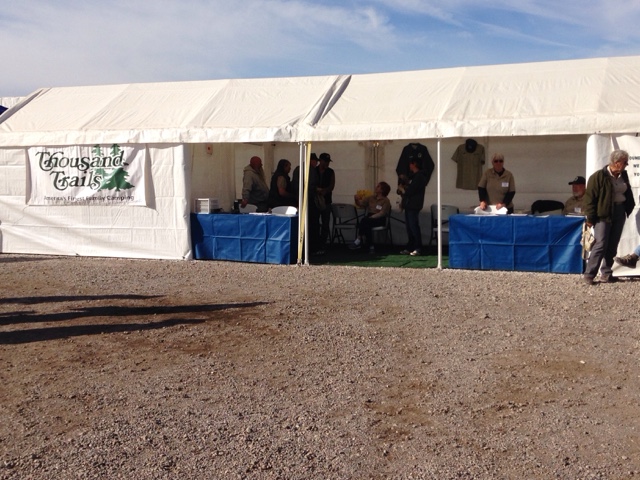 (One camp host company at the event was outside)
For Vandwellers this event means employment this summer working as as a camp host at State and Federal campgrounds.
Many at the RTR live on Social Security, Socual Security Disability, and savings/pensions.  They look to subsidize their income during the year and camp hosting provides employment generally from May to September or October.
Their are companies that are at the show that do the hiring and for the State and Federal governments and they generally pay the minimum wage for the state you work.

Camp host vendors can vary but the vendor I spoke with (above) who supplies camp hosts on Federal land on the west coast, said it is 5 days on and 2 off and the pay is $10.50 an hour and she stressed that it was $.50 over California minimum wage.
One RTR attendee I talked to later that day was excited that she and another woman that were looking for a camphost position got s job in NE Utah this summer.  The excitement was they got jobs together as it was a campground that was looking for two camphosts to share the work.
The work is generally the same at each job collecting money, cleaning the sites after people leave, attending to the toilets, etc. 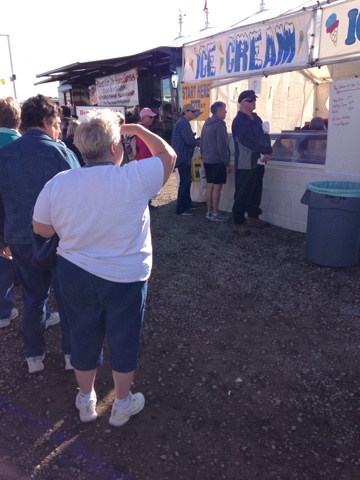 I needed to put this picture in for all those that are dealing with winter.  Yes it was another beautiful day and ice cream was a big attraction.  I passed. 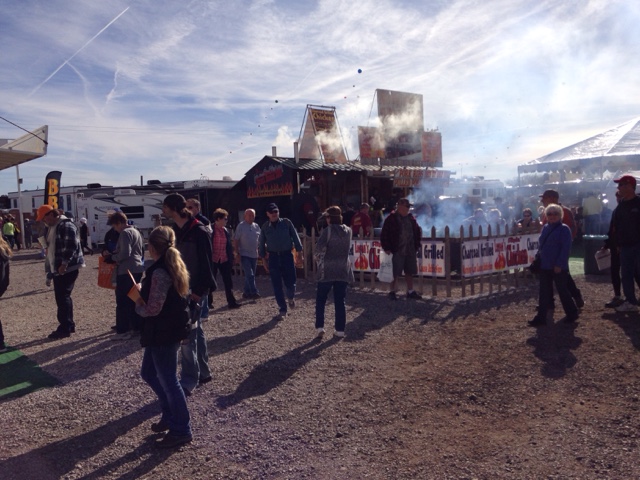 What would an event like this be without food. 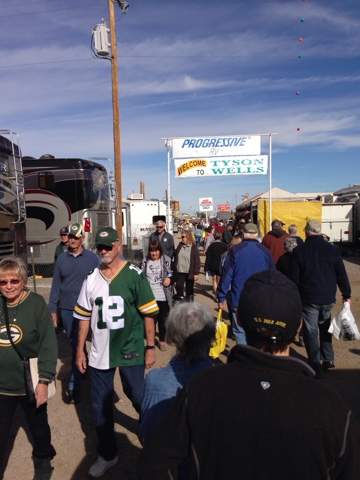 "The Big Tent" is next to the Tyson Wells outdoor market and I hadn't looked around that much yet so I took the afternoon to check out more vendors. 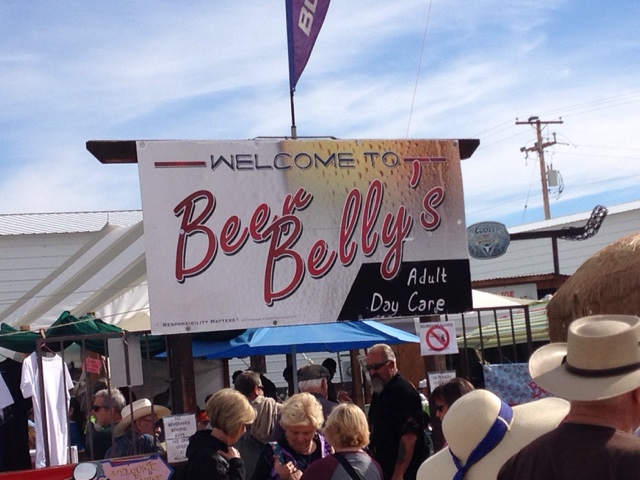 Ah, an outdoor beer garden and it looked inviting for a stop for a beer. 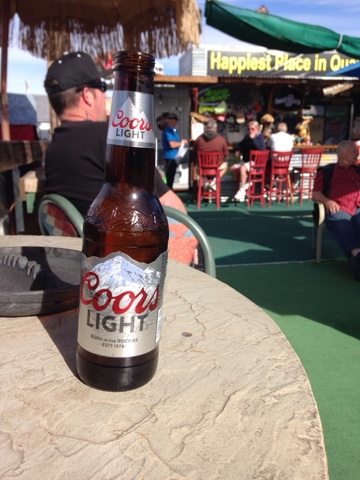 Here I am at a tall table enjoying a beer in the sun.  No craft beer here so I went with the standby.  At the suggestion of a friend I decided to get a pulled pork sandwich to go with my beer.
I don't eat out much on the road choosing to cook a meal most days, but I had been on the road 12 days and this will be my first purchased meal on the trip, although not much of a meal. 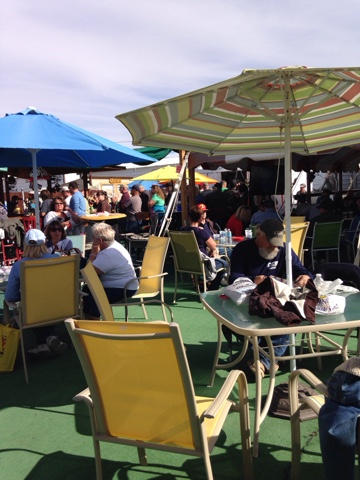 Within a half hour of arriving st Beer Belly's there was a line to get in.  When I arrived only 20% of the seats were taken. This change only took a 1-2 hour.  The crowd must have exited the tent.
In a conversation with the bartender he told me that they close after St. Patrick's Day as it gets too hot and the Sniwbirds are moving out.
Brent
macaloney@hotmail.com
Posted by Brent’s Travels at 9:58 AM