Acer And His Flying Machine 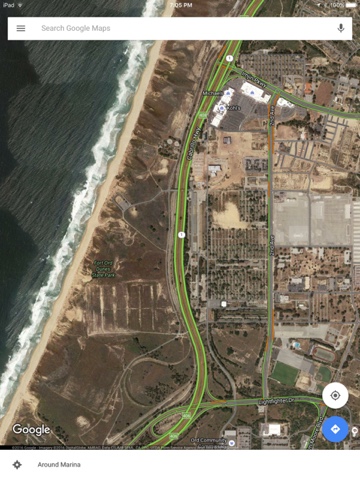 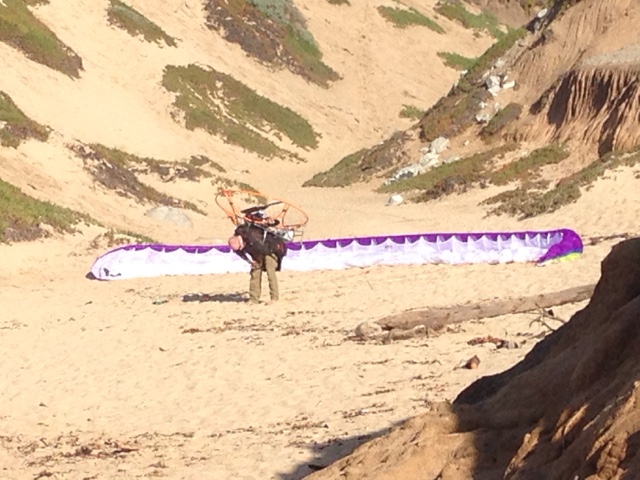 Here I met Acer and his Flying Machine.  Acer is a thirty-something who was in the US Navy where he had a number of specialized training that he speaks favorable about.
Today he is excited to fly his powered hang glider for the first time since his training in Florida.  He lives locally here. 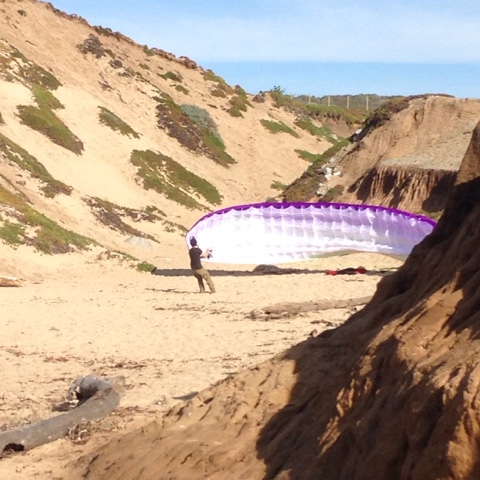 He has checked out this spot before as a good place to meet his needs for taking off but he would rather have an open field.
Above he has layed out his parasail and is pulling on it to see that it picks up the steady ocean breeze and it does. 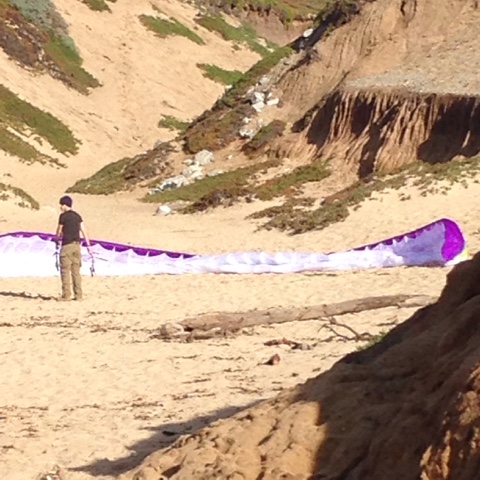 Here Acer is estimating his runway distance where he looks for distance to the shore where high tide waves are waining to give him more space on the shore. 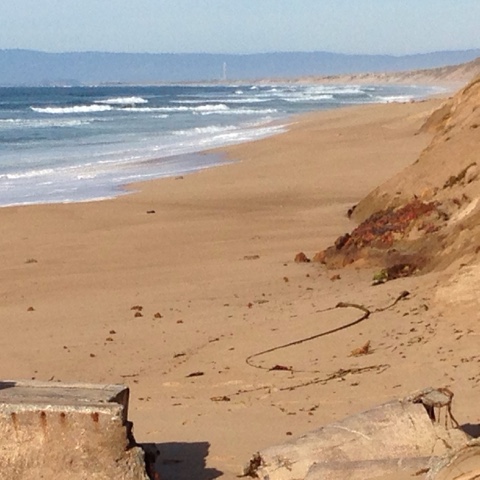 In the foreground is a concern for him with exposed concrete structures that are left over from years gone by when Fort Ord was still active Millitary. After pacing off the distance and running in the sand he is preparing his seated strap on propeller and make the connection to the parasail. 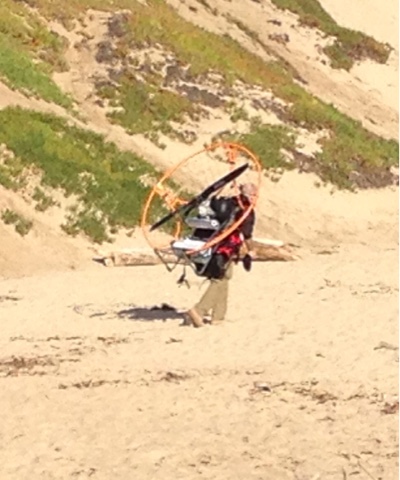 Before he makes his way up to the parasail, he makes a stop over to his audience of two to explain that he is concerned about the steeper drop off than he has seen before exposing the concrete.  My quick look at the concrete block I see it is exposed 5 feet.
Thinking to myself wow that's a lot of missing beach or is he mistaken.
In Acer's favor is the steady light wind and his desire to make his 7th flight after training gave him 6 in Florida. 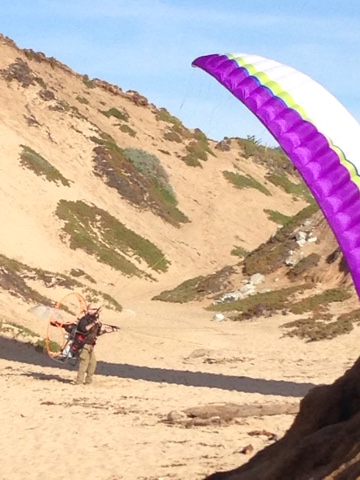 He went up the draw and connected with his 80 horsepower engine running to the parasail.  He then pulled on the parasail and as he was going to turn around and run with it to take off.  Then you can see in the picture above the wind at the higher elevation gave out on one side drooping the one end crashing his dream. At least not crashing himself.
He came back and explained that a sail that doesn't fill completely and equally is one of the few reasons not to attempt takeoff. 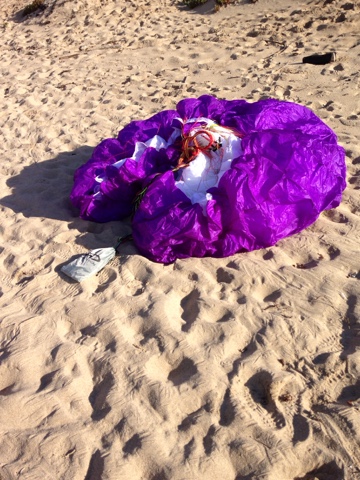 With a disheartened tone in his voice he resigns to the fact that today is not the day for his first flight on the west coast. 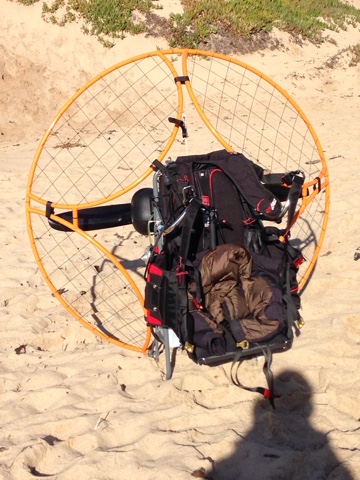 He begins the process of picking up his parasail and then arranging his seated strap on motor with propeller to hike out of the beach.  I was disappointed for him as he was at a quandary of other places he can use as a runway not to cause problems or public concern.
I offered and carried out the now backpacked parasail.
Acer had the hard job of hiking out with the 45 lb contraption strapped to his back and butt so he walks a bit bent forward.
Back at the parking lot he gets to his newer Jeep CJ where his vehicle interior is not sufficient size to carry the assembled backpacked motor propeller assembly, so he needs to disassemble the yellow ring to get it to fit.
He plans on a trip to Harbor a freight for a hitch platform to carry it in the future.
I asked Acer how much money was he into this hobby and he said all together the equipment and training in Florida it is $9,500.
We shook hands and I wished him well when he gets his first flight here. 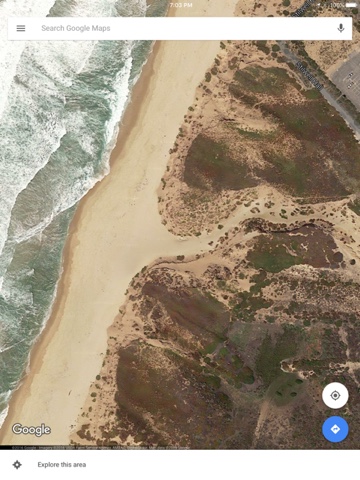 (Google map)
Here is a map of the area that Acer was looking to take off.  When I got back to my son's house I was curious if he was wrong about the missing beach.
As you can see Acer was right that the beach was there when the aerial photo was taken.
Recent strong storms generally blamed on El Niño has taken the beach away.  That's about 5 feet of beach depth to expose that concrete block.
In the news here is about a an apartment complex about to fall into the Pacific Ocean in Pacifica, CA.  Strong storms have weeded the sea cliffs to the point that the building is no longer safe.
Web article on Pacificia: http://abcnews.go.com/US/dramatic-photos-show-apartments-feet-falling-ocean/story?id=36528327
The story explains how strong the  storms are in shifting the shoreline.
Brent
macaloney@hotmail.com
Posted by Brent’s Travels at 8:21 PM