The word Slough is not that common in North American English so I feel it best to first share the definition.  The following is from a Google search.
slough1
slou,slo͞o/
noun 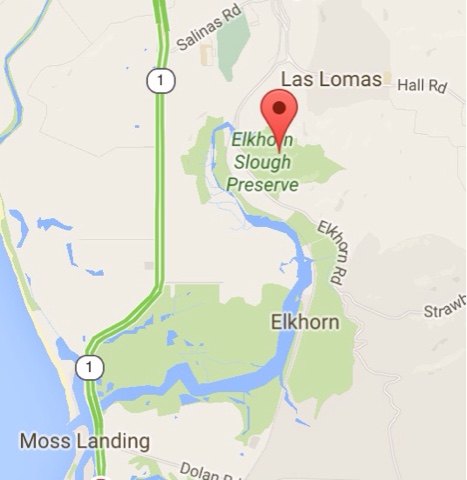 About midway between Monterey and Santa Cruz, California is Moss Landing and just to the east is Elkhorn Slough. 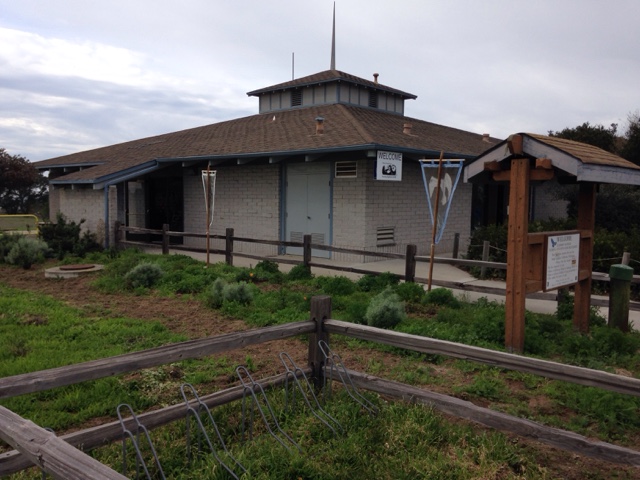 A Thursday morning stop to hike the reserve trails finds buses of school children also visiting during a school trip.
Before the hike one of the visitor center employees highlights where wildlife sightings are often encountered along the miles of trails in 2500 acres of marsh, tidal, woods and fields.
The a Reserve was set aside to protect one of the few remaining coastal waterways in California. 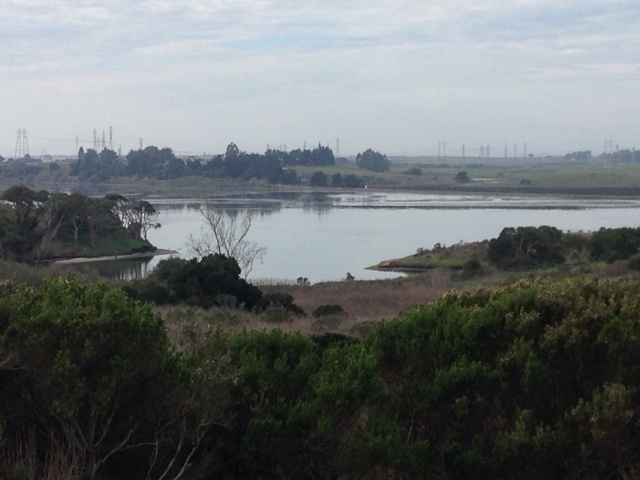 The hike of the grounds starts out on a gradual slop down to the backwater with the ocean just over the horizon.  In fact, the ocean waves crashing can be heard in off in the distance.
The water that comprises the reserve is fed both by fresh and majority salt water 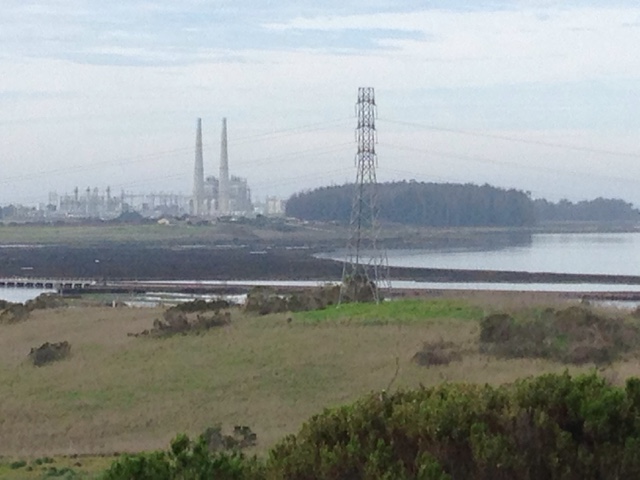 Off in the distance is the Moss Landing power station.  We had a blackout while in Montetey that lasted a number of hours due to a transmission line. 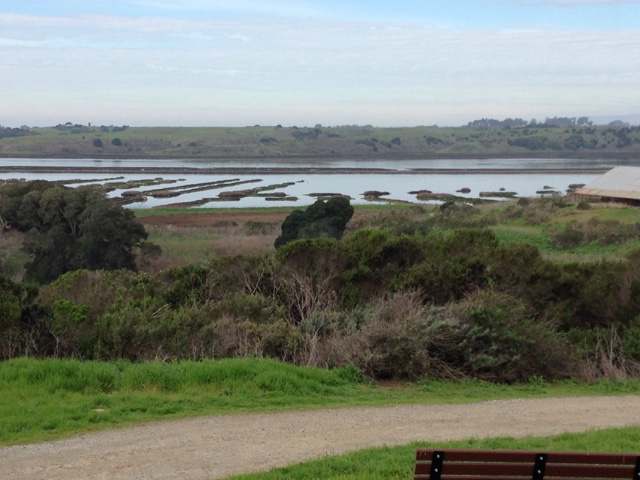 The woman in the information center had advised that the finger islands you see in the distance (above) were created by The Army Corp of Engineers dredging the area. They moved the dredged material to form the islands. 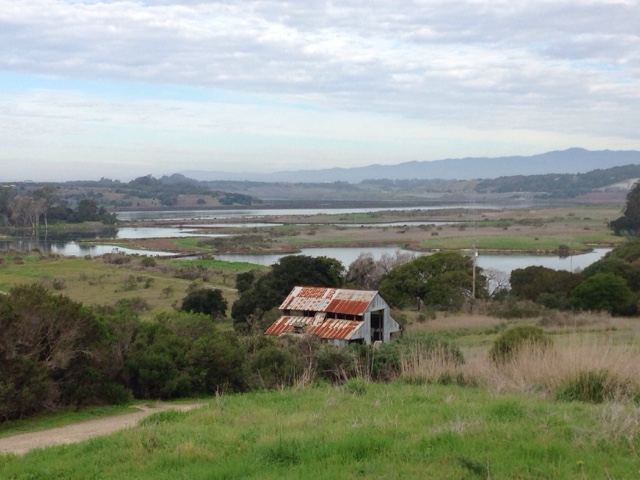 The land was originally a farm and now two older buildings remain as evidence of its previous existence. 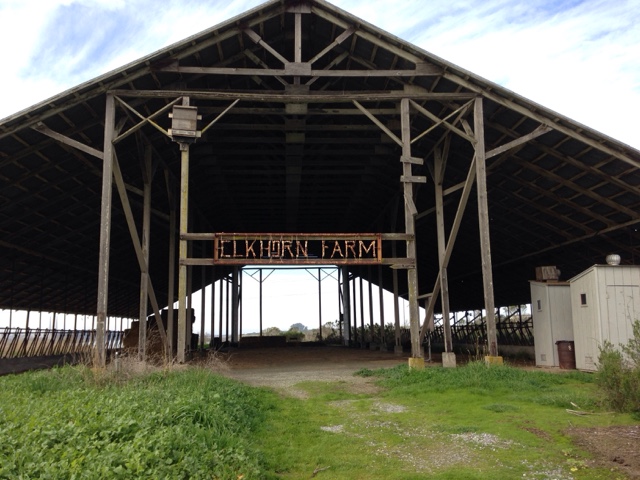 This large steel cow barn maintains a presence and a place to attract barn owls.  None are around this time of year. 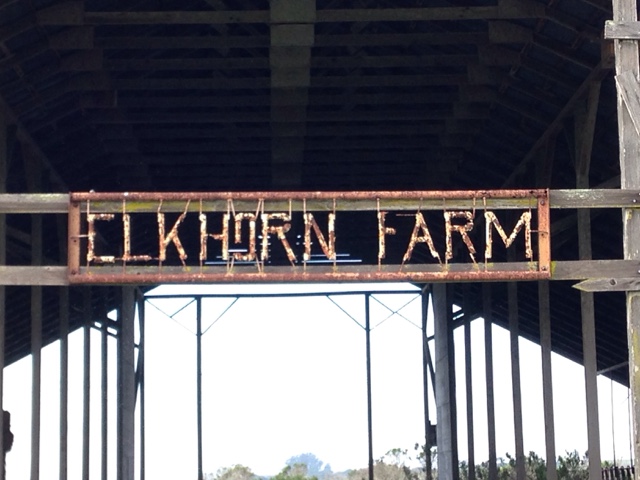 The Elkhorn Farm name once had all the letter segments on the sign and there used to be cows to go with it. 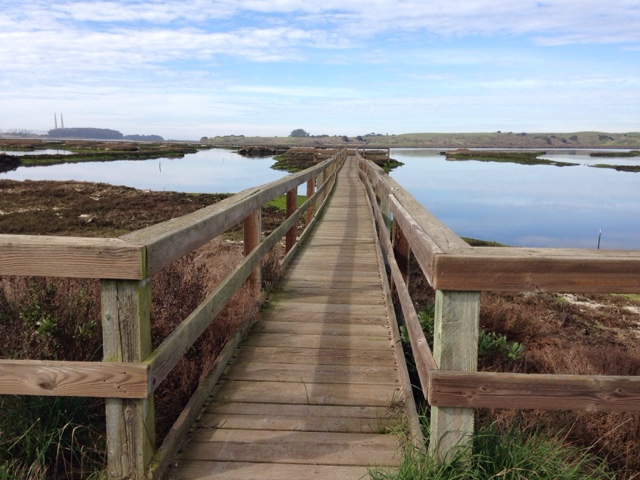 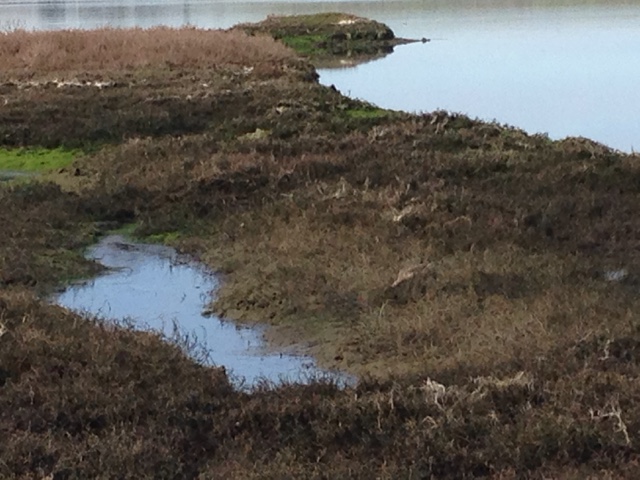 Here a sharp eye can see the small birds with the same brown color as the background. 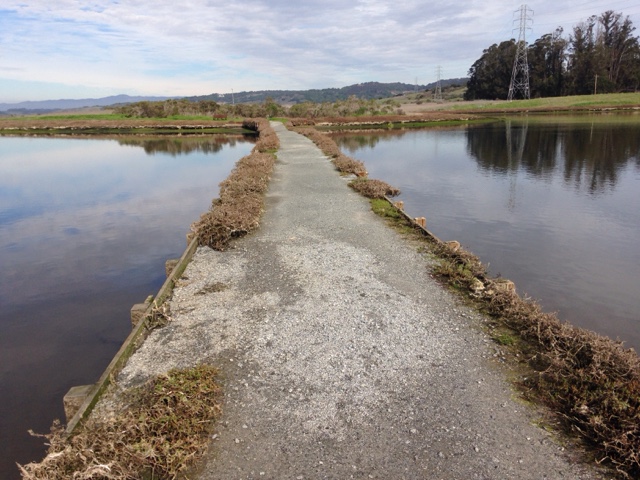 There are narrow levees to walk to various parts of the reserve. 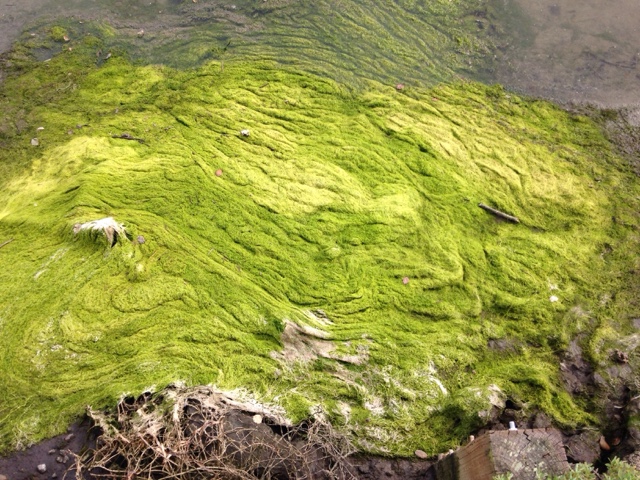 This alge has an interesting color and texture.  It would make a great picture puzzle with the ripples and shades of green. 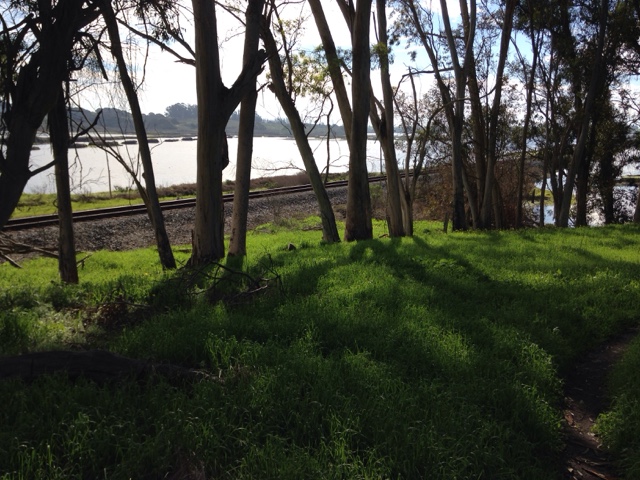 There is a larger island on the property that appears to have been used as a place to relax during the farms existence. 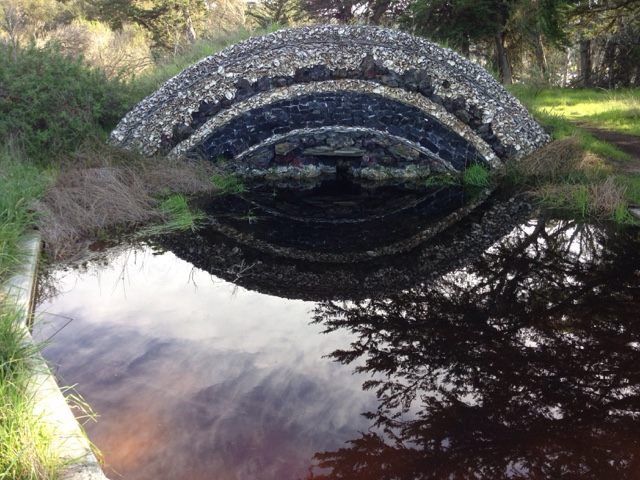 On the island that is over an acre in size has this reflecting pond with sculptured end made from concentric rock and sea shell layers.  It took a lot of work to make and now is left unmanaged. 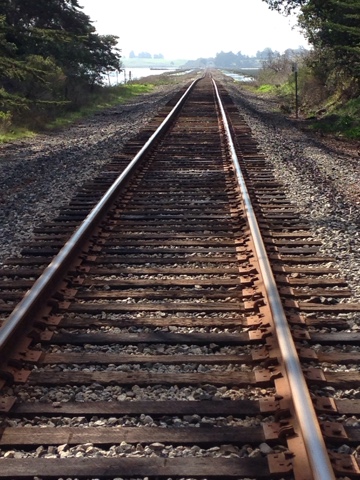 To get to the island you need to cross the train track.  You could hear the train coming miles away. 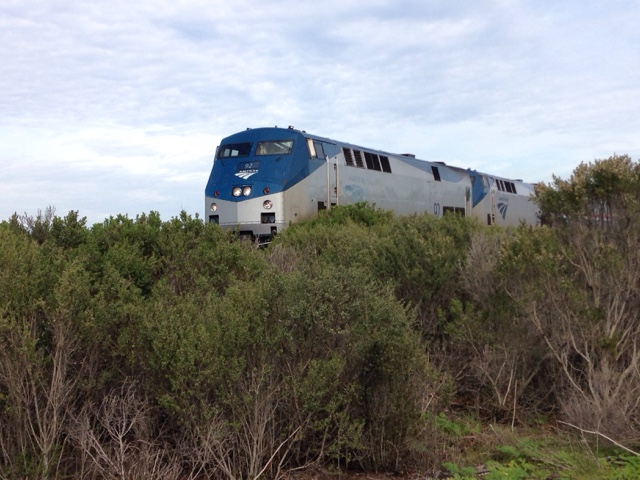 I waited for the train to get there so I could take s picture of it. 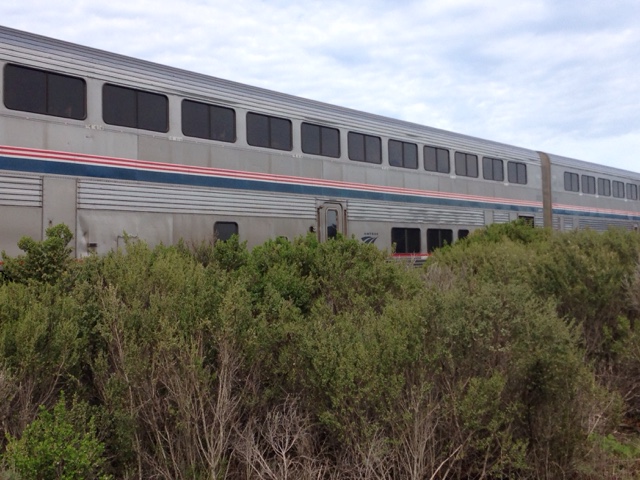 It is the passenger train that goes from Los Angeles to San Fransisco. 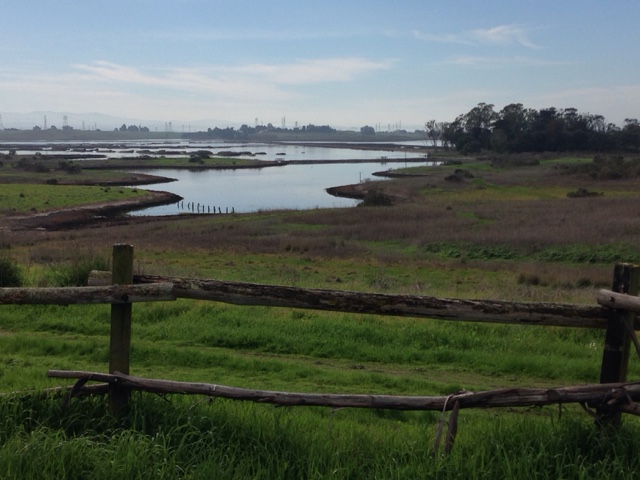 The land is not all close to water as it has many fields too. 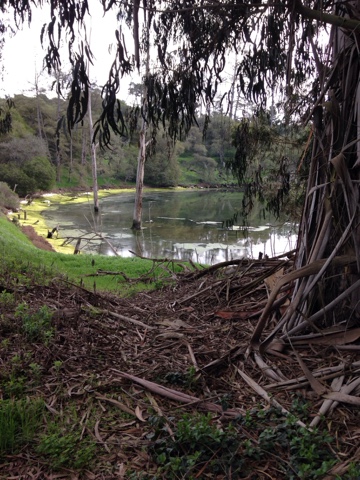 Another interesting site was this pond and eucalyptus trees. 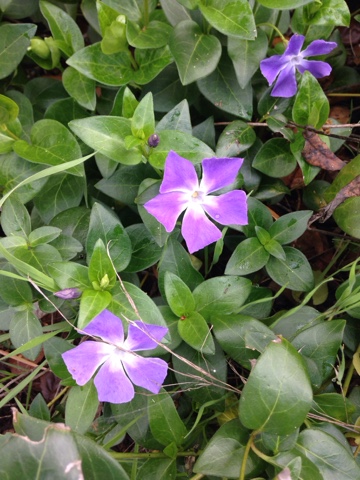 Of course there are flowers along the way. 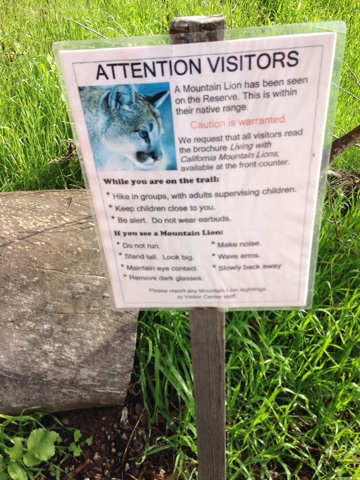 Then away from the water is this sign warning of a mountain lion siting in the area and precautions to take.
Possibly they should review this before you start the hike. 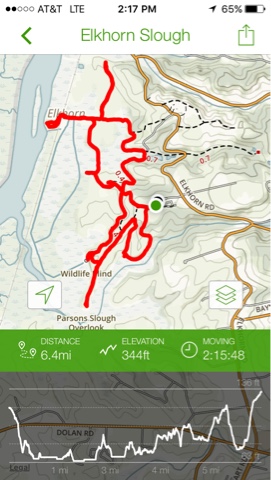 I tracked the hike using my AllTrails App covering nearly every trail in the reserve.  The hike covered 6.4 miles and 344 ft elevation in 2 hours 15 minutes of moving time.
It was a cool day with a couple sprinkles but the hike was up and down so the cool temps were refreshing. 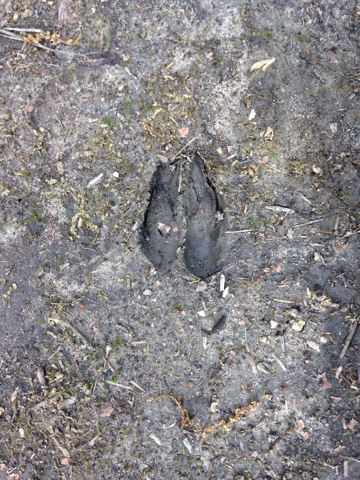 Although not as dramatic as the ocean views I have posted it is a nice place to see wildlife.  This is a print from a small deer, but none were seen even though tracks were seen all over the reserve. 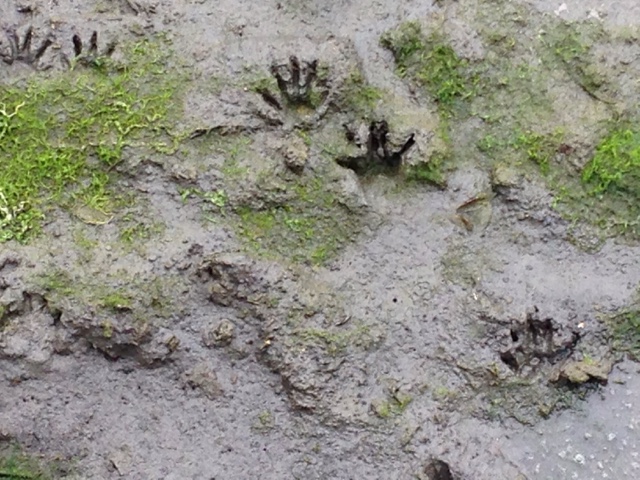 I'm not sure what animal made these tracks but possibly sea otters as it was mentioned that they are often seen.
Brent
macaloney@hotmail.com
Posted by Brent’s Travels at 9:33 PM