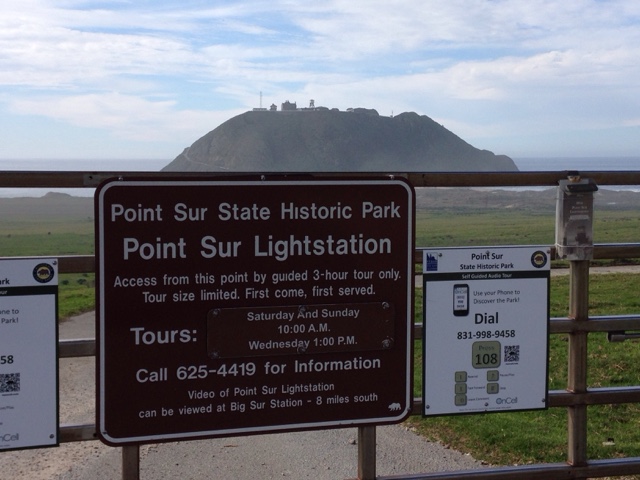 While at the 6th Annual Whalefest at the old Fisherman's Warf in Monterey, CA over the weekend the Point Sur Lighthouse staff had a booth handing out brochures about their historic site approximately 30 miles south of Monterey.
Since they are only open Wednesday through Sunday, Wednesday was the first opportunity to tour the site at the north end of the famous Big Sur coast. 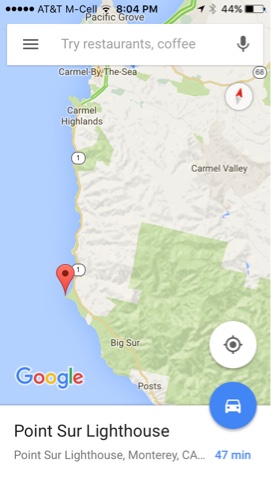 (Google Map showing the location)
Way at the top of the map you can see Pacific Grove.  Monterey is just to the right of it under the a Google banner.
The drive took the PCH (Pacific Coast Highway) to mile post 54.1 at the entrance to a farmer field (top photo) as this is where we will be met to be escorted to the base of the mountain that is the site of the Point Sur Lighthouse and complex called a lighthouse station. 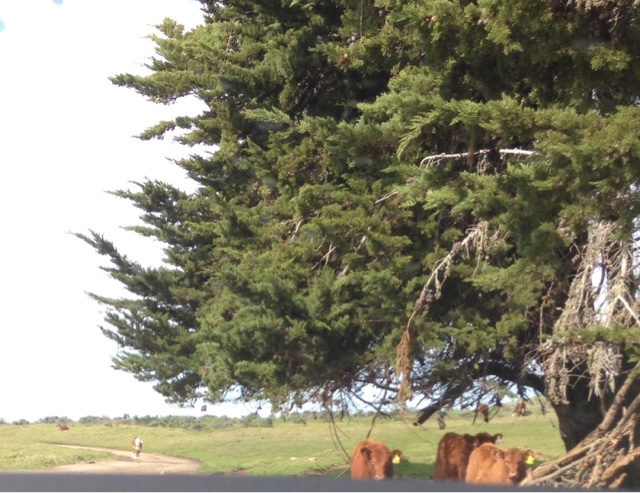 After giving your name and number in the vehicle it was about a mile drive to the parking lot at the base of the mountain.  Driving in requires caution as cattle are grazing, some are in the road and we have to wait for them. 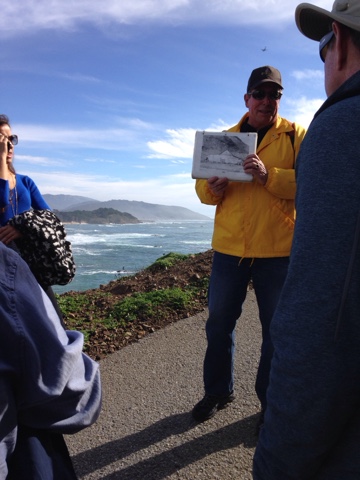 We all park at the base of the mountain, where our 3 hour tour starts (yes 3 hour tour). They only accept 40 people on the tour but this time of year there is no problem having just less than 20 today.  It is first come first serve as you line up at the gate on the PCH.
Above, Tom is our guide for the first half of the tour.  We stop every couple hundred feet to allow everyone to catch up as it is a steep incline to the top of this mountain, that once was an island during high tide, when the lighthouse was first built.
Overtime shifting sand on the coast filled in the land between the island and the mainland to make a solid landmass now.
Tom explains that this was a light station as there were families who lived here to man the station.  To make this site acceptable for living they needed to level the top by 80 feet.  They had to climb over 300 stairs to get to the top and all supplies including water needed to be carried up. 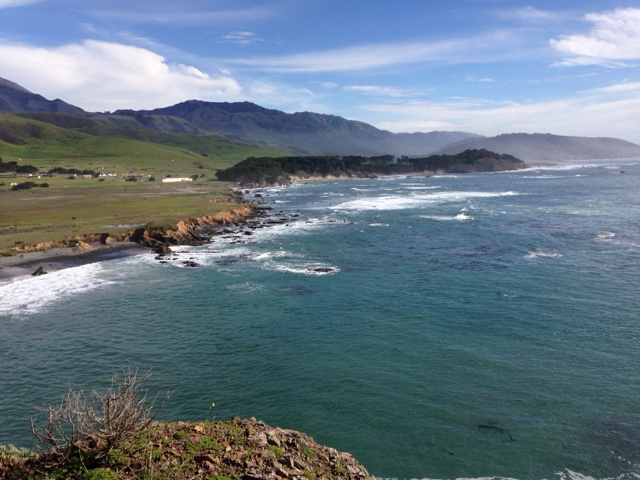 Looking south on the light station access road that was built in the early part of the 1900's you can see the Big Sur coastline.
When the site was first set up as a lighthouse supplies came by ship every 3-4 months as it went up and down the coast providing supplies to 10 California lighthouses. 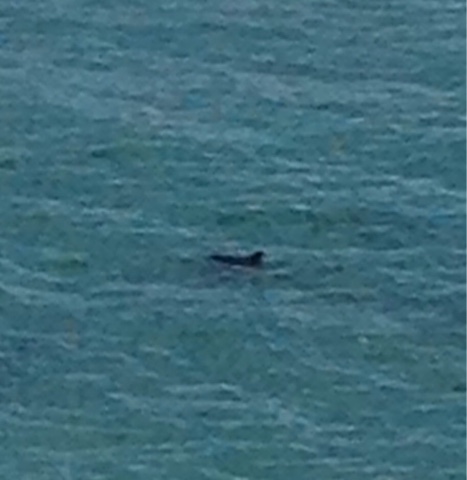 The photo is a bit grainy as I had to blow up the picture but that is a dolphin swimming below us.  There is a lot of sea to find Sea Otters, Sea Lions that were resting on the ragged rocks below, and whales blowing waterspouts about a mile out at sea. 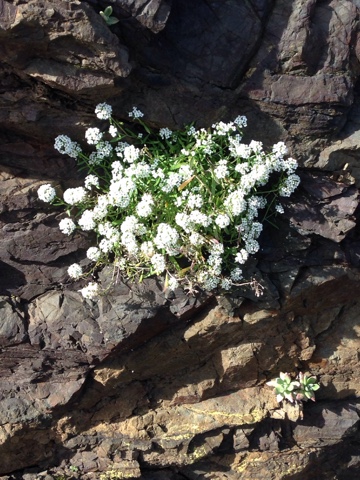 The recent rain has brought out a lot of flowering plants.
Steam powered lifts were added over time to bring supplies to the top.  Removing the need to haul supplies up a ladder and later rope systems. 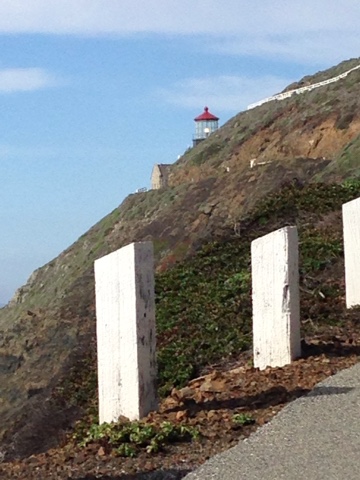 Our first glance of the lighthouse.  It was put down on the side of the mountain to stay visible in the low marine cloud layer that often forms along the California coast. 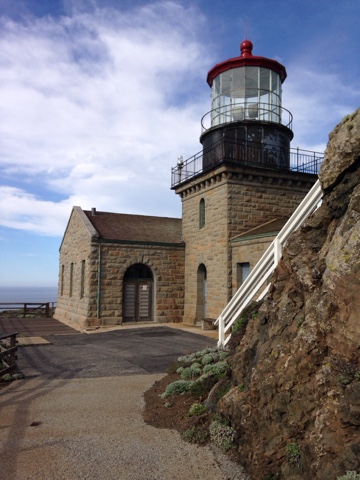 Now at the lighthouse, Patty our other guide, took over.  Patty and Tom are two of 80 volunteers to operate this state park, as the only fully volunteer state park in California. 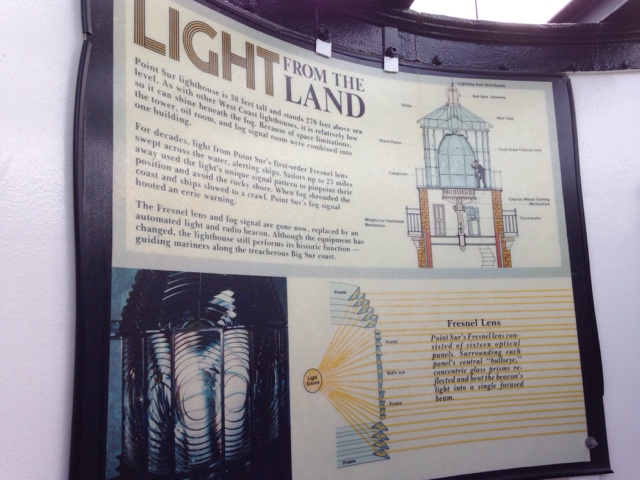 This is the picture of the original lighting system and lenses at the lighthouse.
The lighthouse continues to operate with electric spotlights today.

Here is a picture of the original light mechanism, now located at the Museum of Monterey (MOM), in Monterey.  I took photos of the lenses last year when I went to the museum on my 2015 Travels. 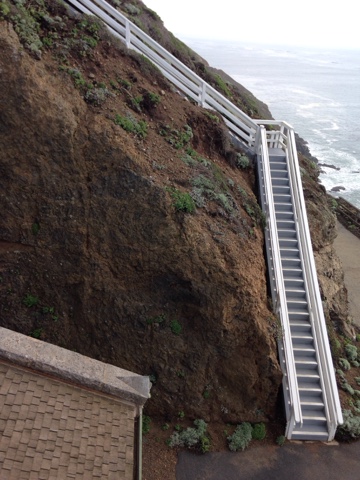 We will now as assend the remaining elevation 61 stairs to the top. 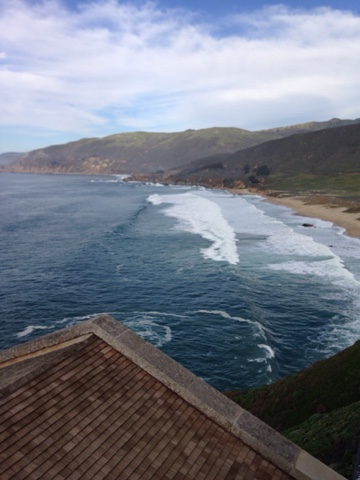 Here is the beach to the north of the lighthouse. 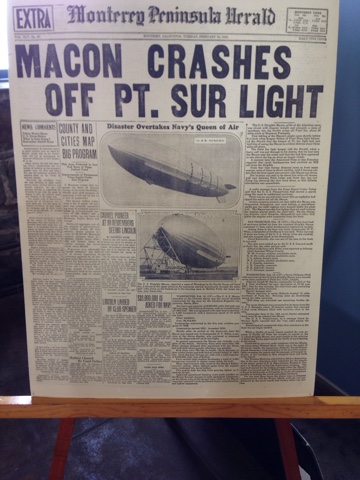 There was a notable incident here when the blimp Macon, three times the length of a 747 that crashed here with 83 crew onboard in the 1930's.  All but 2 survived.
The Macon was one of two originally built to carry biplanes inside and was the first aircraft carrier.  The biplanes could clip on stantions that retracted inside the blimp with the planes.
The Macon now sits in 1500 ft of water where it came to rest after it drifted and sank south and a bit out to sea from here.
For more on the Macon see the following link.  https://en.m.wikipedia.org/wiki/USS_Macon_(ZRS-5) 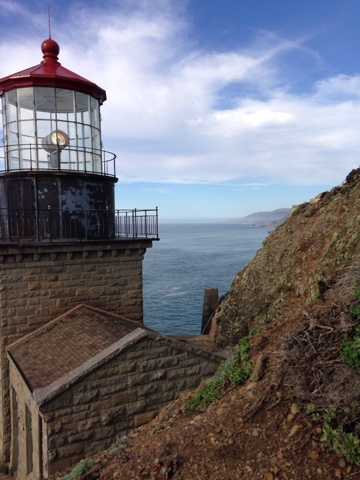 Here you can see the newer electric Spotlight that was put here by the Coast Guard when they ran the station. 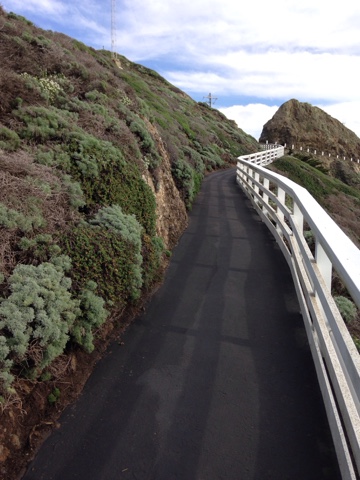 In looking at the stairs and this walkway I estimated the cost in materials to build and maintain this.
The volunteers charge $12 for the tour and use this entrance money, sale of items in guift shop, and other donations to maintain and renovate the buildings.
They have done a wonderful job.  When I arrived there were 4 volunteers planting sea grass at the area where people parked to hold back the shifting sands. 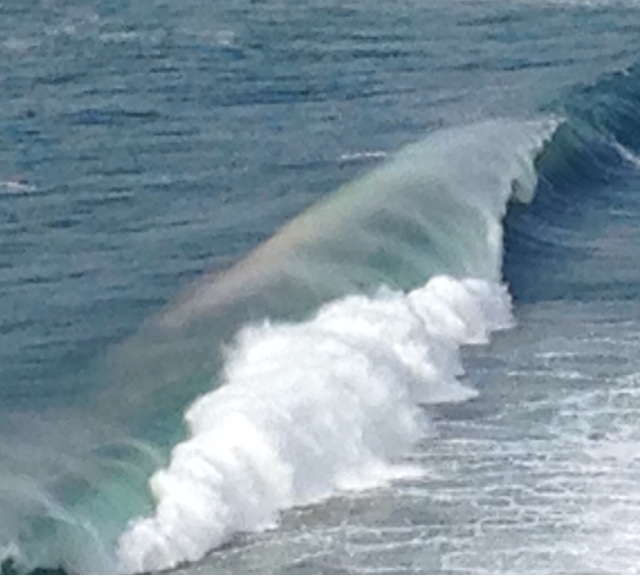 I zoomed into this wave from the top of the mountain as the angle of the lower sun turned the mist from the wave into a rainbow.  My photo doesn't do the rainbow justice but you can see a tinge of color on the mist at the top of the wave. 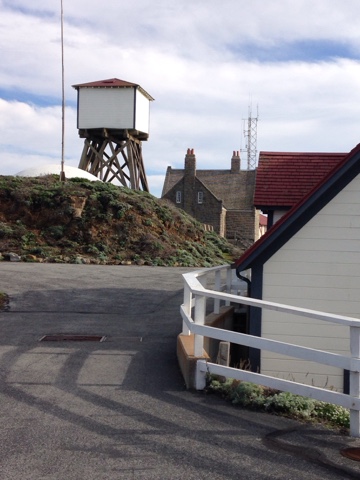 On top there is a barn to the right that has been fully renovated.  Straight away is a replica of a water tower that was built by AT&T in payment for allowing them to put antenna on the mountain.  Behind me is a carpenter/blacksmith shop that has also been renovated.  Volunteers have stocked with period tools in both through donations and purchases off of eBay. 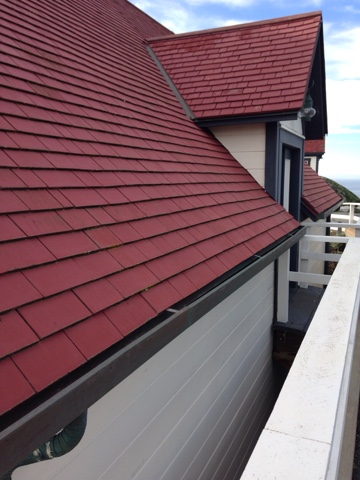 You can see the quality of the renovation work on the barn. 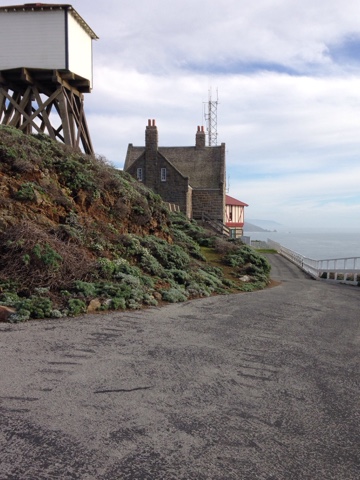 The stone building ahead was built originally for up to 4 families that lived here and the husbands worked on the site.
At times when sufficient children were here a teacher would be boarded during the week to provide instruction. 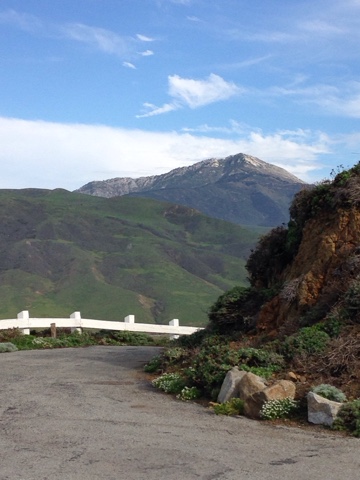 A view of the nearby mountains to the east. 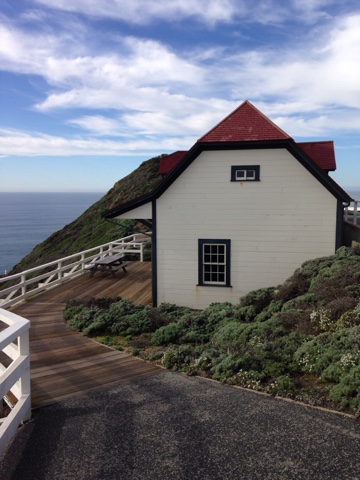 A better view of the barn.  The second floor is a work area for today's volunteers and the bottom is open for displays.  When the Coast Guard was here the second floor was for games such as pool. 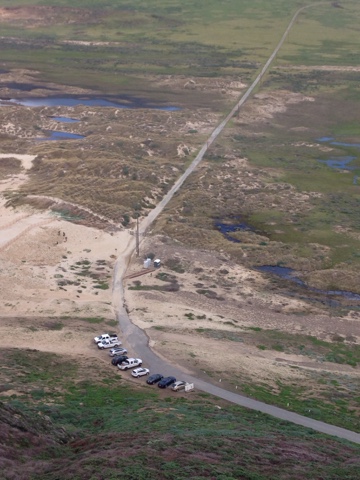 A look down to where our cars were parked for the tour and the long road in.  This is the area that used to be tidewater but is now land. 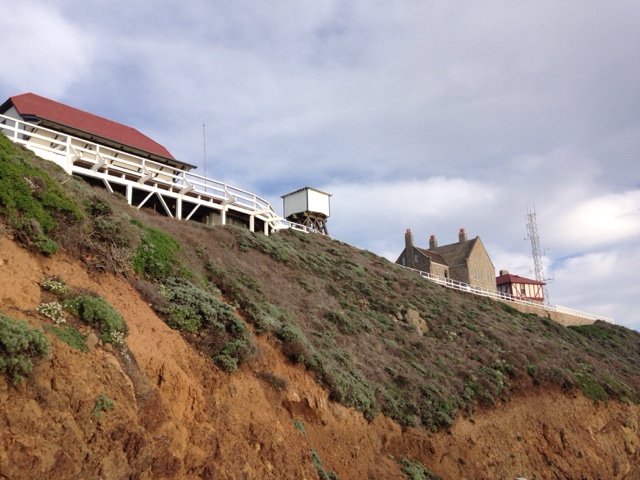 The building to the right was the lighthouse keepers family home. 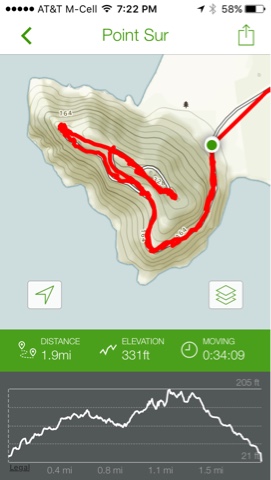 Here is the stats on the hike up the mountain.  Under 2 miles, 331 ft in elevation and 34 minutes of moving out of 3 hours of touring.
This is an excellent tour that was well worth the $12.00.  As for a fun volunteering opportunity this would be one.
Brent
macaloney@hotmail.com
Posted by Brent’s Travels at 8:02 PM