I was in the Bartow History Museum (Bartow County) in Cartersville, GA http://bartowhistorymuseum.org/
and saw a picture of people standing outside the movie theater waiting to see this show and I noticed the marquee has show times based on gender and had to find out more.
The following is from Wikipedia. 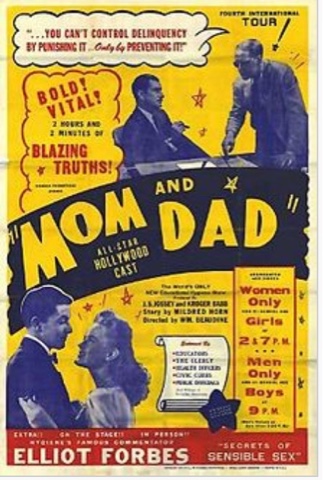 Mom and Dad (known as The Family Story in the United Kingdom)[3] is a feature-length 1945 film directed by William Beaudine, and largely produced by the exploitation film maker and presenter Kroger Babb. Mom and Dadis considered the most successful film within its genre[4] of "sex hygiene" films. Although it faced numerous legal challenges and was condemned by the National Legion of Decency,[5] it went on to become one of the highest-grossing films of the 1940s.

The film is regarded as an exploitation film as it was repackaged controversial content designed to establish an educational value that might circumvent U.S. censorship laws. Babb's marketing of his film incorporated old-style medicine show techniques, and used unique promotions to build an audience. These formed a template for his later works, which were imitated by his contemporary filmmakers. In 2005, the film was added to the United States National Film Registry, in recognition of its numerous achievements.

http://m.imdb.com/title/tt0040603/plotsummary?ref_=m_tt_ov_pl
Because a high school girl's parents refuse to discuss sex education (called "personal hygiene" in the film) with her, she gets pregnant by her boyfriend, who conveniently dies. Her parents are blamed, and the local sex education teacher uses this opportunity to show a film showing the dangers (and results) of VD and the birth of a baby.
https://m.youtube.com/watch?v=NjBYCpx7ZwM
------------------------
It's amazing how far our society has come over the years with sex education. From a movie that portrayed itself as "hygiene" and being banned in many places, and having separate viewings based on being male and female.
I grew up when the terminology of "a girl being in trouble" to today being pregnant.
With the amount of teen pregnancy rates listed here https://thenationalcampaign.org/data/compare/1701
2014 - 249,078 NUMBER OF TEEN BIRTHS
I think work still needs to be done.
Brent
macaloney@hotmail.com
Posted by Brent’s Travels at 3:41 PM