Why You Want A LiFePo4 House Battery For Small Vehicle Living 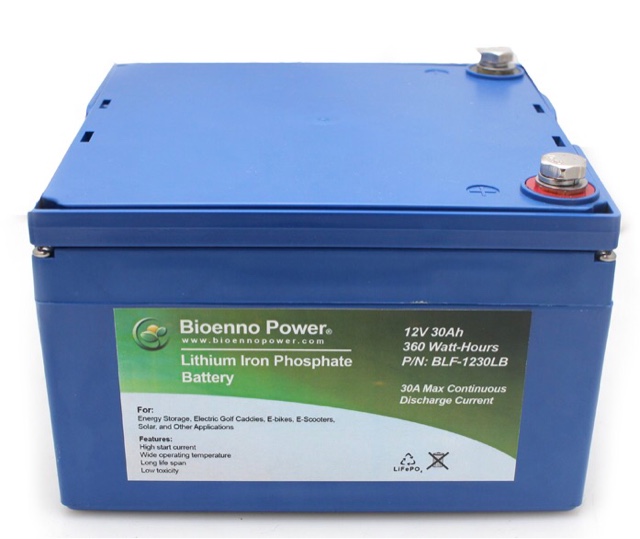 Above is a picture from the Bioenno website for my 12 volt 30 amp hour LiFePo4 Battery.
Note: I am not affiliated with Bioenno in any way, and receive no compensation for my review of their product.  I encourage you, after reading this, that you do your own research into the technology and manufactures/suppliers and come to your own decision on what works best for you, and who you buy from should be based on your independent research.
I have been on the road for three weeks so far of my 2017 Travels, and I'm ready to report on my Prius House Battery upgrade to LiFePo4 Battery, from Lead Acid Gel Cells.
My friend David, who full-times in his Prius, said to me at the 2017 RTR; "You nailed it with a battery for small vehicles."
I hadn't had the time to take a retrospective view of my new LiFePo4 house battery design, and in the following days at the RTR, what he said to me sunk in.
While looking at all the car, van, and truck dwellers, I realized we all had something in common.  That was, lack of space for house battery, little time for maintenance of it, no ability to easily vent it general lack of knowledge of how to care for it either.
I don't want to get too technical here, as it isn't necessary to make my points.  My goal is to take the science out of using LiFePo4 in small vehicles.  It really comes down to cost, not fear of the technology, as it relates to the many benefits of LiFePo4.
This blog post is why I believe that using a LiFePo4 Battery is preferable over Lead Acid Battery Technology.
1. Off Gassing / Venting - I live in my Prius for 4 months a year, and although at low charge rates on Lead Acid batteries do not generate large amounts of off gassing, when you work to bring them up to full charge or quick charge Lead acid they do off gass.
The reason I went with Gel Cells initially for my Prius house battery is for their minimal off gassing.
AGM Batteries also have some limited off gassing when charging.  A small tube is applied to the 12 volt AGM Prius battery to address this. 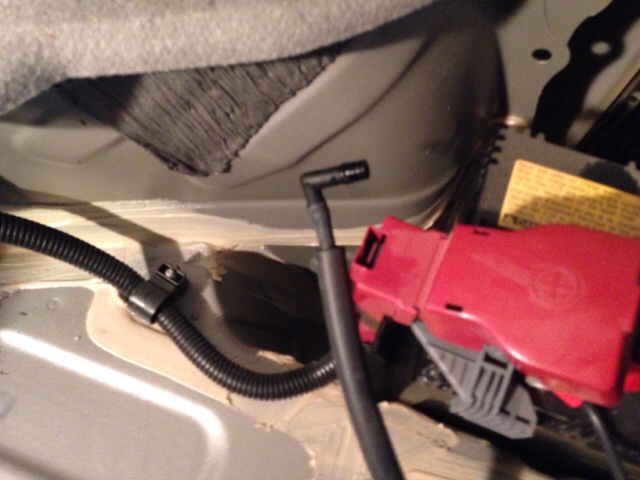 Wet cells are most susceptible to off gassing and why on manufactured RV's they are in a vented cabinet. This off gassing issue is why a number of people who put batteries in the passenger compartment use AGM Batteries, as a way to minimize the risk.
As most vandwellers will tell you all risks are manageable, so off gassing is something that many manage and do well at it on the road.
Note: Gel Cells, AGM, and Wet Cells are all Lead Acid Batteries. Also note that I do not know of anyone who has had problems with off gassing.  I do know a number of people that are sensitive to chemicals and it may be a concern for them.
LiFePo4 do not off gas when normally charging.  They do have pressure relief point that is used in emergency typically when it overheats.  I purchased my LiFePo4 Battery with a protection circuit to shut down if it gets too hot, thus eliminating my concern about a thermal problem.
2. Battery Orientation - Lead Acid Batteries have to be oriented in one direction.  My LiFePo4 is actually upside down as the space I put it in on the left rear drivers side had a dip that didn't make the space flat and quite large enough for my LiFePo4 Battery.  Since I had made a protective plastic cover for the exposed terminals, the height of the protection allowed me to flip it over and it sits flat in the space. 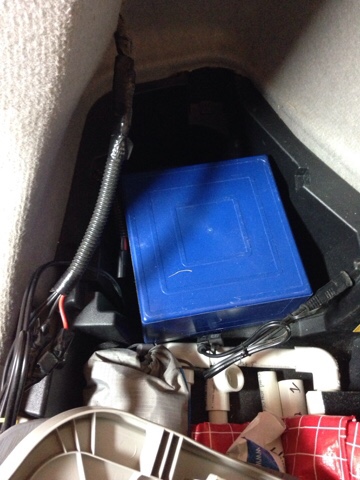 3. Charge Cycles - Here we have to use specifications as I don't have the testing to support any claim.
Lead Acid Batteries have charging cycles in the hundreds.  I'm talking about wet cells, and seeing 500 charge cycles published, but this is for a properly maintained battery.
LiFePo4 has thousands of charge cycles.  From what I have seen published 2000 charge cycles can be expected and there is no maintaince to follow. In full disclosure it could be much higher for number of charge cycles, but there is a spec that shows that if you fully deplete the LiFePo4 battery as your way of knowing when to recharge, the number of charge cycles is reduced closer to 2000. I charge my LiFePo4 way before fully depleted and I consider the battery an investment and not just an expense.  The thought is similar to my Engel compressor fridge.  It was $860.00 delivered and I'm on my fourth year of using it.
4. Weight - Those of you that have moved Lead Acid batteries around know they are heavy.  For me my one LiFePo4 30 ah battery weighs in at 8 lbs and is just over half of the weight of the 3 8ah (24 ah total) gel cells I had before the LiFePo4 battery.
5. Size - My 3 8ah gel cells consume almost identically the space as my LiFePo4 does.  The LiFePo4 is a tad bigger in total volume of space.
Above is a picture of my LiFePo4 in the same space as the Gel Cells in the picture below. 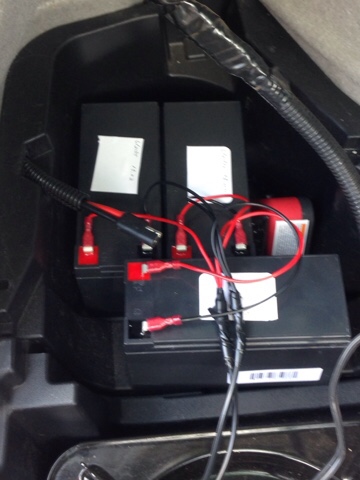 Bioenno Power recommends that you purchase a single battery that meets your voltage and capacity requirement to avoid any potential problems. Problems may arise if you attempt assembly of a larger capacity battery from multiple smaller units. The risks incurred may result in injury depending on output of battery. It is important to understand that LFP batteries are not like Legos – you should not attempt to wire them together as such. Our batteries are all computer controlled and should not be confused with the more common SLA, AA, AAA, and other such basic batteries which do not have any type of computer chip control. If your requirements should fall beyond our standard product lines, we have the capability of manufacturing most custom orders. Our experienced staff will assist you to the best of our abilities.

Brent
macaloney@hotmail.com
Posted by Brent’s Travels at 5:32 AM