The RTR starts tomorrow and based on chatter on the cheaprvliving,com blog it is expected to be more attending than last year.
The few hundred people that the RTR is small in comparison to the estimated 100,000 people that in total descend on Quartzsite.
Bob Wells started the gathering in 2010 and each year it had grown in size.
This is my second year attending as 3 years ago I arrived after it was over.
My travels took me from Tucson through Phoenix (picture above) where the Monday rush traffic was in full force.

After a couple stops for supplies I arrived at the RTR.  There were many already set up for the event.  In the afternoon there was a steady stream of people coming in claiming a spot for the next 14 days.
I introduced my self to new arrivals around me and the ones here before stopped by to do the same.  They are all generally a friendly crowd with some closer to the center and others farther out.
Around me are 4 solo woman all being their first year attending.  I met a woman from MA who has been here before.  Of course there are some that I met last year that I rember their their names and others I just remember faces.
Dogs being leashed is a requirement on this BLM land and I met this guy with a dog carriage with two small dogs inside. It was a novel idea in not needing a leash.
You can see some clouds in the sky.  Some showers that were from the storm in CA came through and made for a pleasant afternoon. 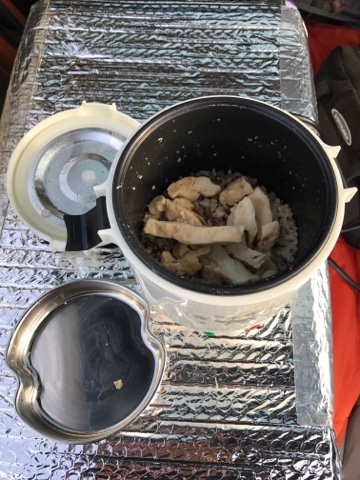 Dinner was multi grain rice with precooked chicken on the steam tray then mixed in my new rice cooker.  Dinner took 10 minutes.  To keep it warm I use the pot as my bowel. 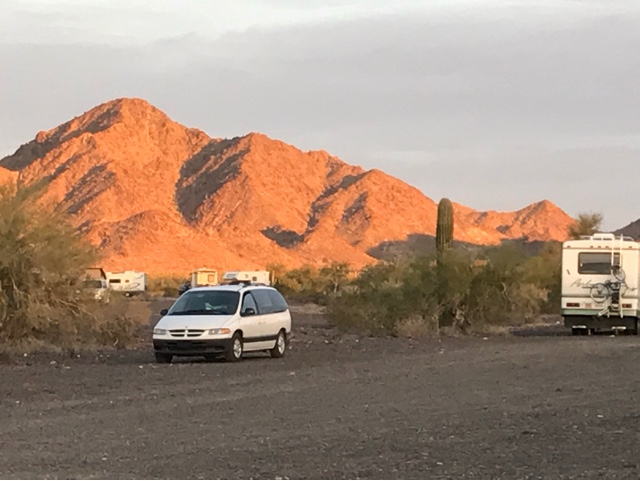 The colors and shading of the sunset in the eastern mountains was great.
There was sufficient sun after the showers to charge my lithium house battery for my nights usage.
Tomorrow the RTR kicks off!
Brent
macaloney@hotmail.com
Posted by Brent’s Travels at 6:08 PM