It was an early day having to drop off the camper at the Chevrolet dealer at Mission Bay at 7am.  I checked in wanting an oil change and tire rotation, as well as look at/provide any advice on why the engine stalled on I8 in AZ the other day.
$39.99 for oil & tire rotation plus taxes & hazardous materials fee for disposal.  Yea, most garages get paid for their used oil - a racket they all play.  I was told that it would cost $139 to look into the problem.  I reluctantly said yes, although my research on the internet had about 6 possible things that could cause the engine to do this and considering it was intermittent it was a low probability they would find it.
The service manager Lupe called and she asked if I still wanted the work now that the mechanic came back and said it would take longer for the testing now the remembered it was a cab over design and the doghouse inside the cab needed to be removed.  So the cost went up to $169.00.  I already had reservations about spending money on an intermittent problem so I declined the investigation.
Later I got a call about questions on the status of the fluids and if I felt they needed changing.  No, I am good with those.  They did a battery test and the battery was lower by about 40% of cold cranking amps.  I was not surprised and I decided to have it changed.  Work  & battery totaled &192+.
While the camper was being addressed I was on my bike with new brakes to dpwn town San Diego.
I   through Old Town but there wasn't anyone there being very early. 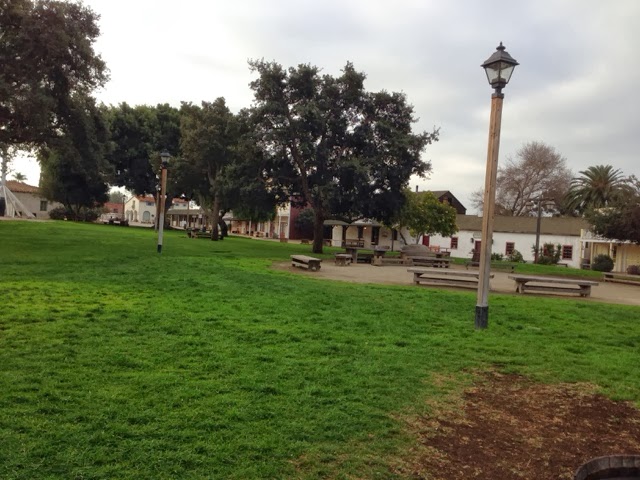 I was happy riding on the hill overlooking the I5 traffic thinking it was good to be on the bike. 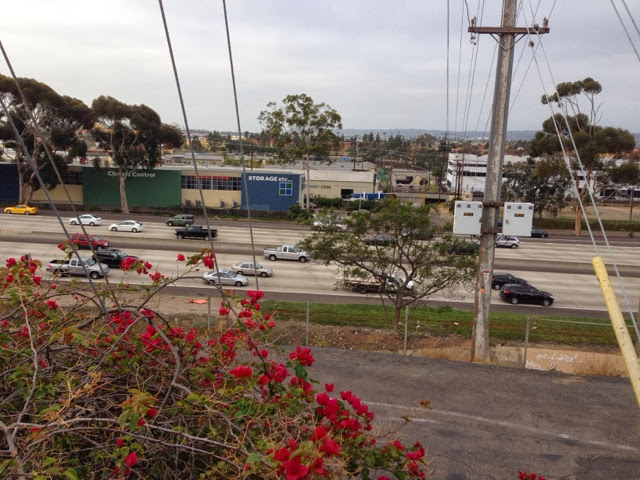 I continued to a Little Italy for a favorate stop to a coffee shop.  This shop there are young Italian woman work there and speak to you in Italian, but also speak English if you prefer.  I splurged on a pastry and I broke tradition and asked what they just served the guy ahead of me and she said it was a cappuccino, so that is what I had.  I've never had one before in my life and it wasn't bad.  I did have to make a choice of organic milk, almond milk, or something else.  Then I needed to decide on one or two shots.  I had one.  First time out I wanted to see how it went with one. 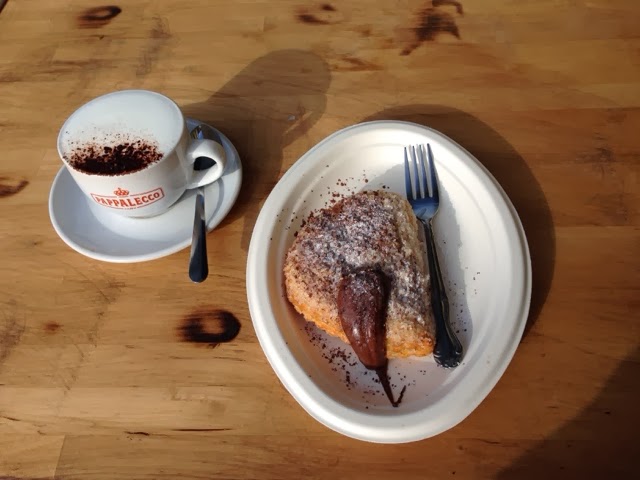 If in San Diego check out this place. 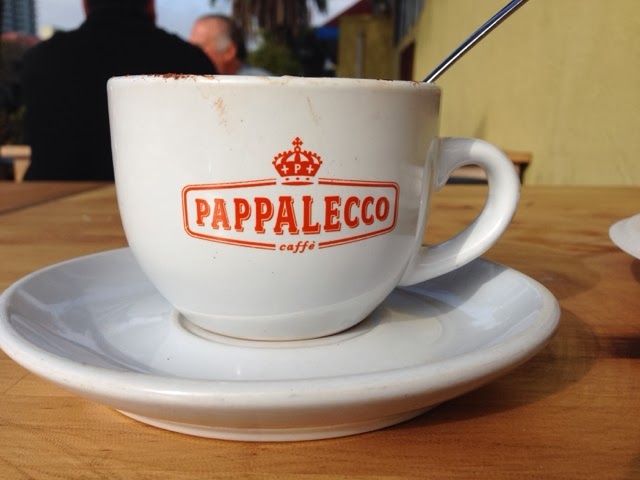 In Little Italy I also found this company that rents these Go Car vehicles. 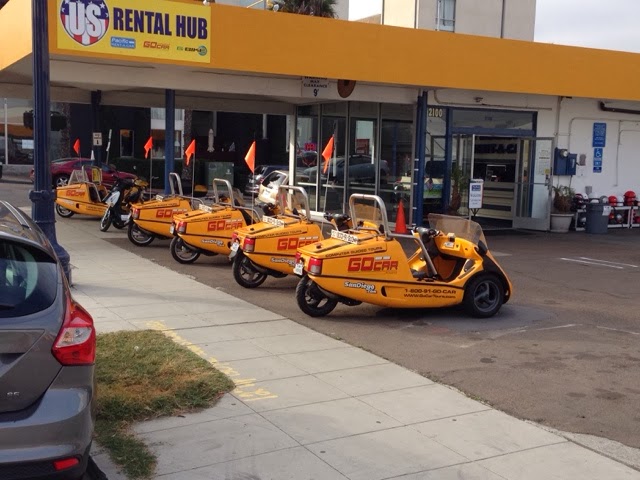 Little Italy is also where the San Diego flight approach flys over just over the buildings. 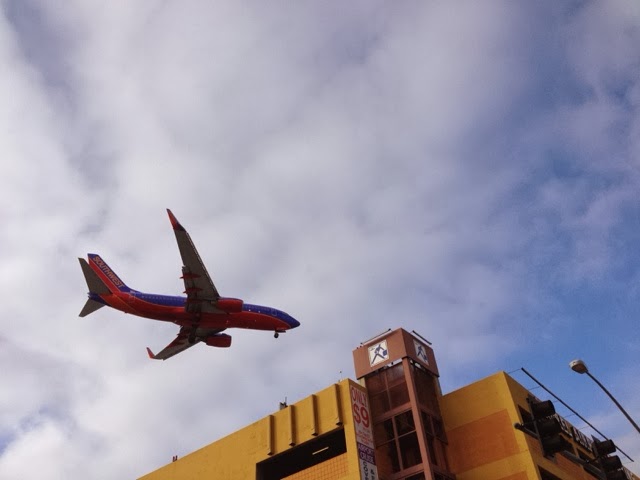 On to the seaport.  Navy ships anchored at Coronodo. 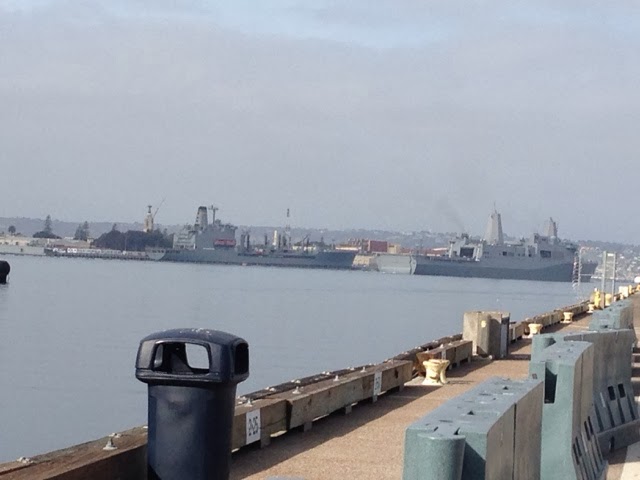 Time for a selfie.  I bought this mini tripod and remote that connects to my iPhone to take pictures so it put it in my backpack today to try it out. 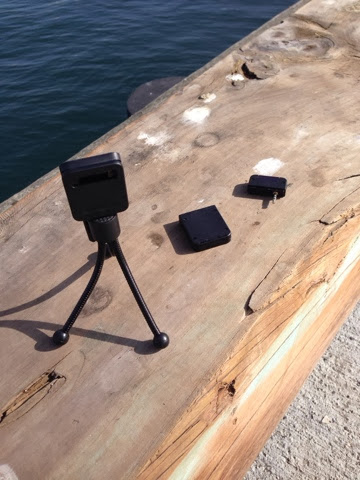 Here is the selfie with downtown behind me.  Me with clicker in hand. 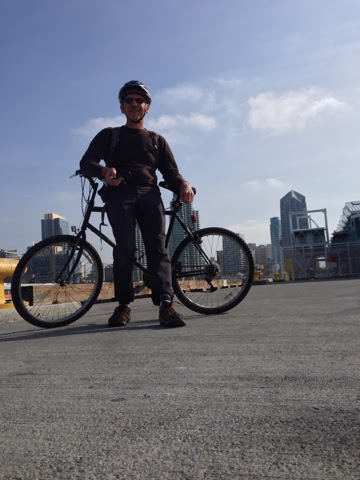 On to the Seaport Village and Convention Center. 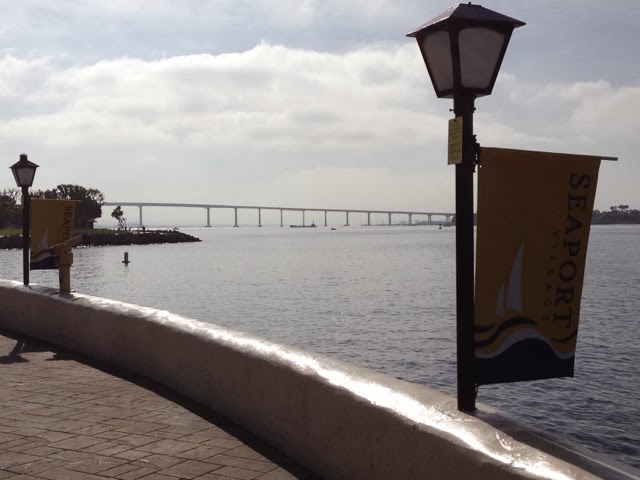 Hope to see the USS Boxer returning to Port under the Coronardo Bridge in the future with Son Clayton on it after being gone since last August.
The Padre's play at Petco Park. 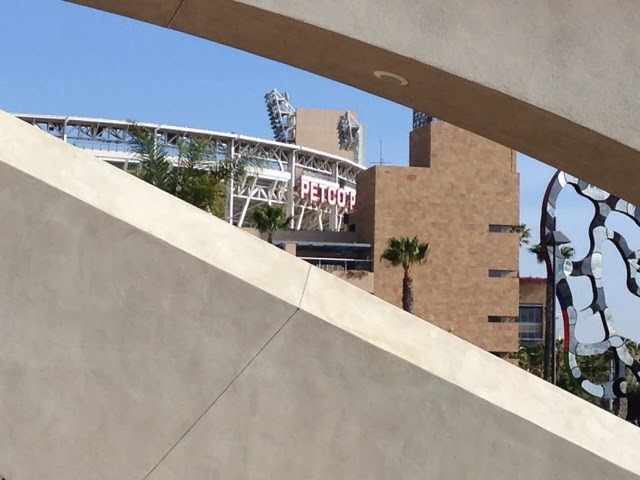 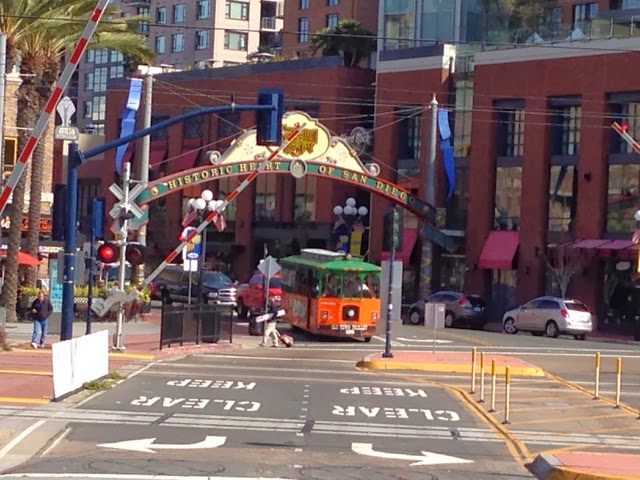 Time to start heading back to pick up camper.
Stop at Old Town where I met Maureen who was painting a picture of one of the historic buildings in water colors.  I disturbed her peace buy interrupting her to start up a conversation.  She was extremely gracious to my abrupt introduction.  Maureen has a very pleasant personality and I could have enjoyed her pleasant smile and conversation longer but the camper was done and I had work to do on it this afternoon.
I did find out from Maureen that she was taking a class in painting with others that were also set up doing the same thing. She had retired and was finding things of interest in life and painting was something she was trying.  Interesting she was doing this to try different things and I was touring the country in a similar fashion.
Peeking at her painting showed an eye for detail and sementry.  She was tasked to paint with 3 colors and her use of the colors with shading and mixing well suited her subject.
I filled her in a bit about me and my travels.  I gave her my card with the hope she may view my travel writings.
In parting Old Town I stopped briefly to listen to one of the park guides giving a tour. 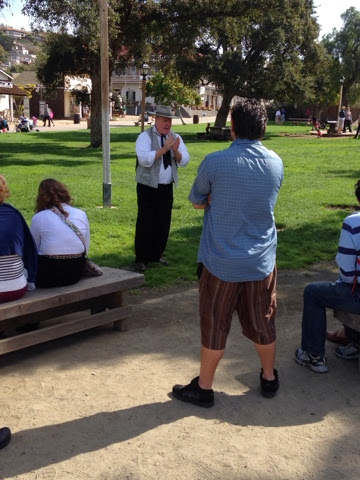 I returned to the Chevy dealer and picked up the camper and paid my bill.  I also ordered a plast part for the latch mechanism that will be delivered later this week.
Back at the house, I tackled installing the rear (backup) camera.  I had installed the screen in the front before I left but this was the first opportunity to do this work.  I needed to remove some inside panels, drill holes run wires, etc.  By days end I had the camera installed and briefly tested the connection to ensure the camera works.
I still have to finish the job with final wiring and reinstalling interior finish panels.  I have it st up that I can turn it on anytime and not just when backing up. 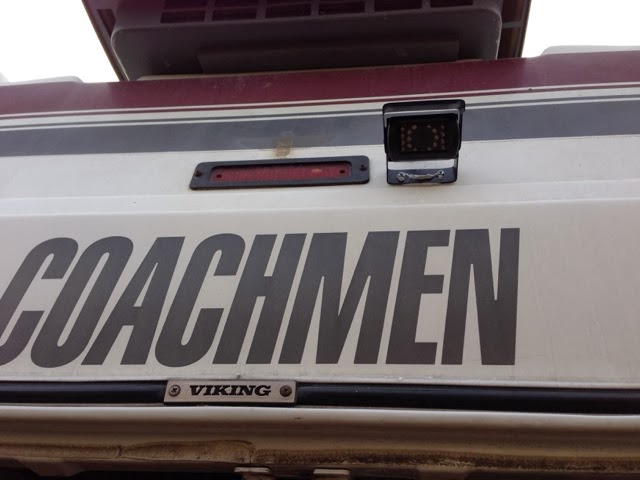 Days done.  Time for leftovers for dinner.
Oh, this blog is for all those that have given me feedback to include lots of pictures, a selfie, a story about people I meet.
The bike trip was about 17 miles.  Also for those that have commented that I needed to smile more I was smiling and saying hi to everyone.  One couple I turned my bike around and took their picture together after seeing them take turns of taking each others picture.
Posted by Brent’s Travels at 8:09 PM