My day started off at 5 am Eastern Time. That is 4 am Central Time haven been woken up by rubbish trucks picking up dumpsters in the area.  I guess this comes from sleeping in a parking lot.
Overnight I did hear a few people getting into their cars and leaving, either workers or people that came to see the band Loverboy play but went right back to sleep.  I got plenty of sleep though.
I along with another guy, we opened the buffet at 7 am.  My free buffet for signing up for the Hard Rock players card.  The food was good and I was done in a half hour.
I got underway and stopped early for gas then on my way to Houston.  This is about a 450 mile drive along I10.
Although there is some changing scenery  along the way, there much of the same.  A few notable things are FEMA trailers  by the hundreds sitting on acres and acres.  There were acres and acres of vehicles and I got the impression that they were brought there having been damaged by Katrina too.
My goal in making Houston today was to get to visit cousin Fran.  Unfortunately Fran and I spoke about noon and she was feeling poorly and figured it best if we didn't meet.
I had been planning to stay at a truck stop tonight along I10, but decided to stay at a state park now that I had some extra time.  Although it is a year round park it appears to be closed as I when I tried to book and  called I couldn't get through.
I needed some fresh food so I went to Walmart just west of Houston and before I started shopping I went and asked if I could park the night and was given a smile from Shelby and she said it would be $50.  Then she said "Just kidding".  I asked where she would like me to park and she said amywhere off to the side.
I finished my shopping and went out took this picture.  Then I heard a train going by right across the street.  Then the trains horn sounded and it was loud.  My guess I may wake a few times tonight from that. 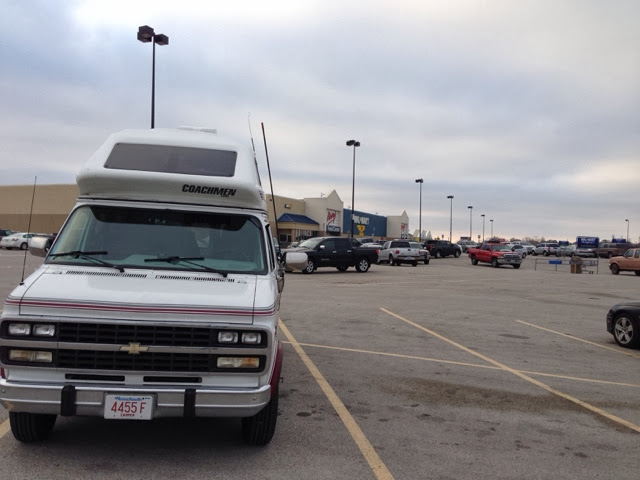