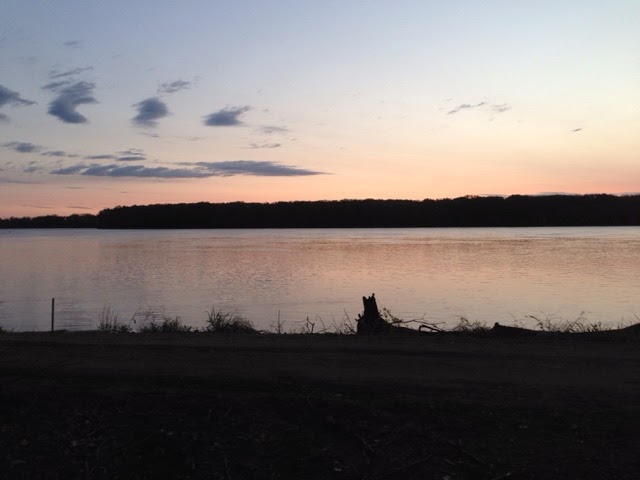 This was my morning image when I woke this am at the campground that is free in Missouri on the Mississippi River.
There were barges coming down the river all night. 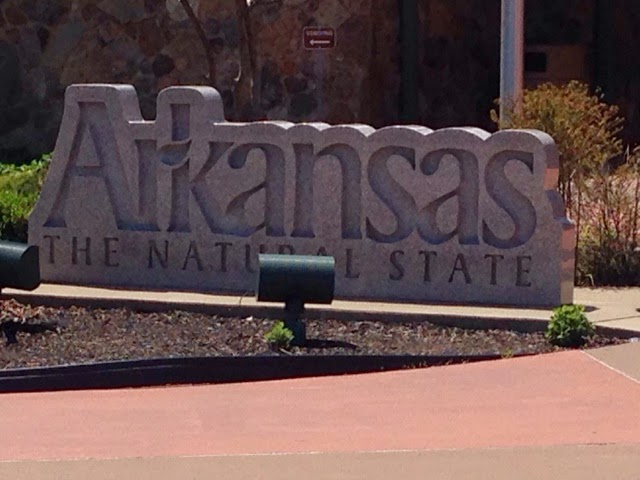 After a half hour drive along the Mississippi River, I noticed that I had to skip the back roads along the river for interstates if I wanted to make my destination by mid afternoon.
I took the outer loop west of Saint Louis and picked up I55 south to Arkansas. 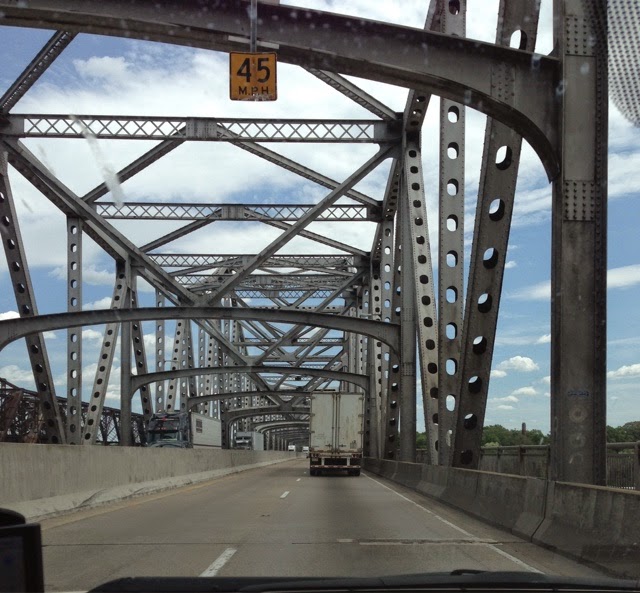 I stayed on this road for 200 miles before heading east over the Mississippi River into Memphis. Tennessee. 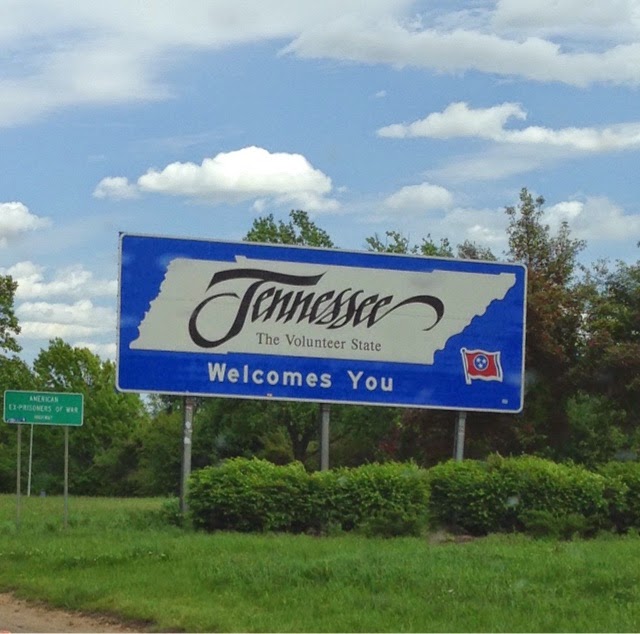 About 15 miles south of Memphis was my destination. 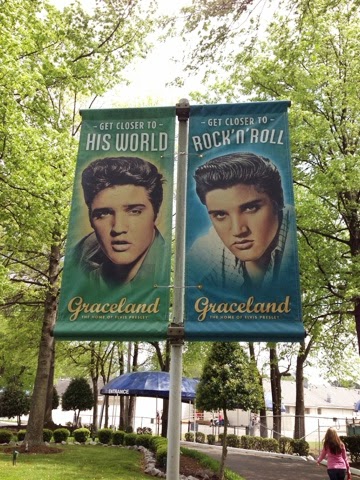 I wanted to visit Graceland.  I have been through Memphis before but have not been here. 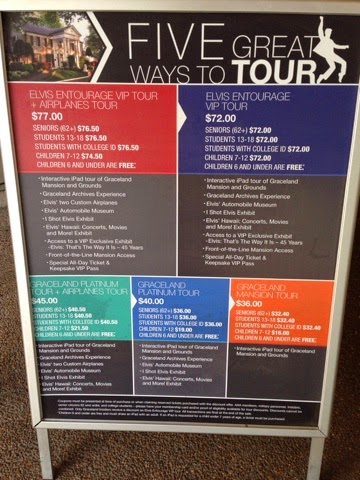 This is the Graceland pricing for entrance.
I chose the Graceland Mansion and grounds for $36.00 but I got it for $32.40.  At the last second the woman selling tickets asked if I have AAA.  I said yes and she said it would be $29.15 after showing my card.  They have s Millitary discount as well but in both cases they are not listed.  This is cost is after I paid $10.00 to park in their lot.
It's off season so it wasn't crowded. I got sent through the lines directly on a bus that drives you directly across the street to Graceland. 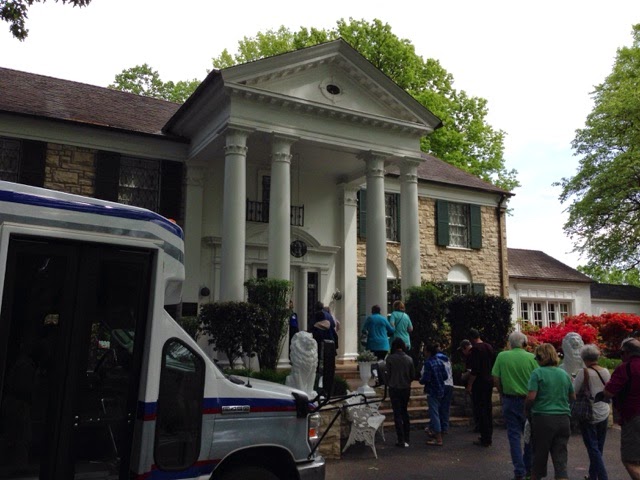 They fit everyone up with an IPad and headset to listen to the narrative.  When you move from room to room the software knows your location and brings up the next page on the margin.  After bringing it up on the IPad it starts the narrative so in actuality you can go at your own pace.
You enter the front door and are directed through the first floor. 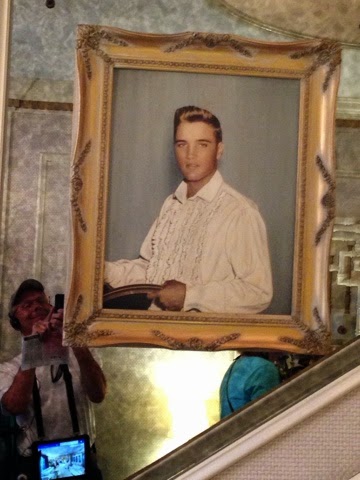 This picture of Elvis Presley is hanging at the bottom of the stairs.  I left in my reflection in the picture.  You can see the IPad around my neck and headphones on. 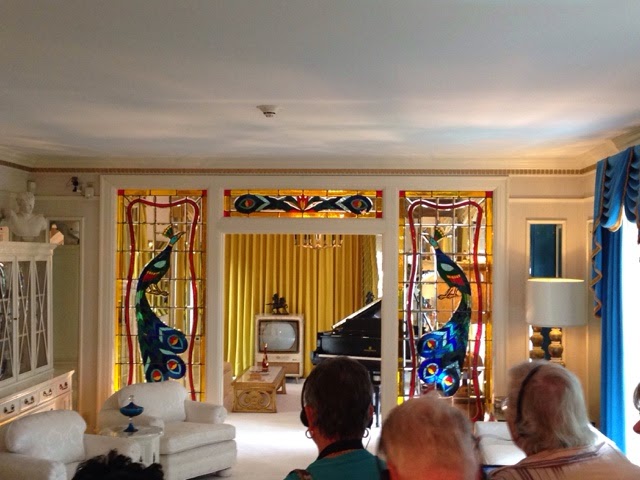 Everything is how it was when Elvis Died in the late 1970's. 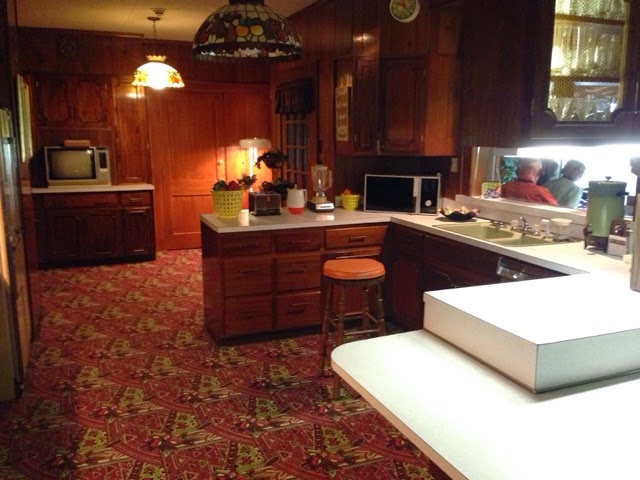 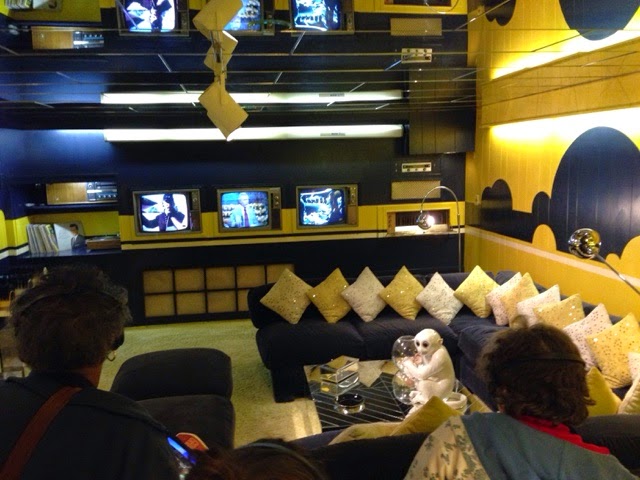 In the basement the TV room 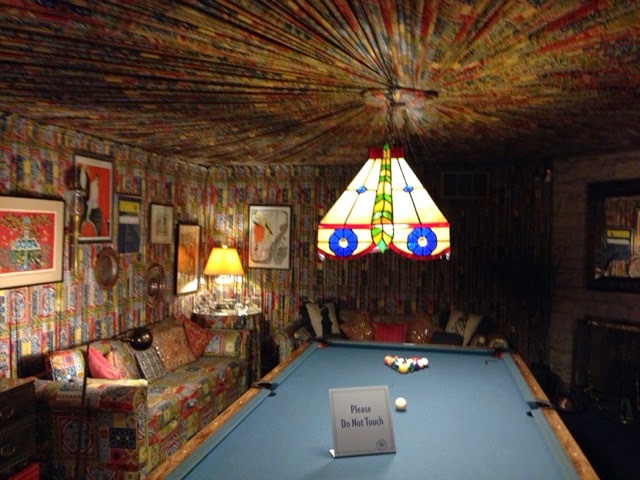 Opposite the TV room in the basement is the pool room with fabric that is gathered in a center point and hung from the ceiling and down the walls. 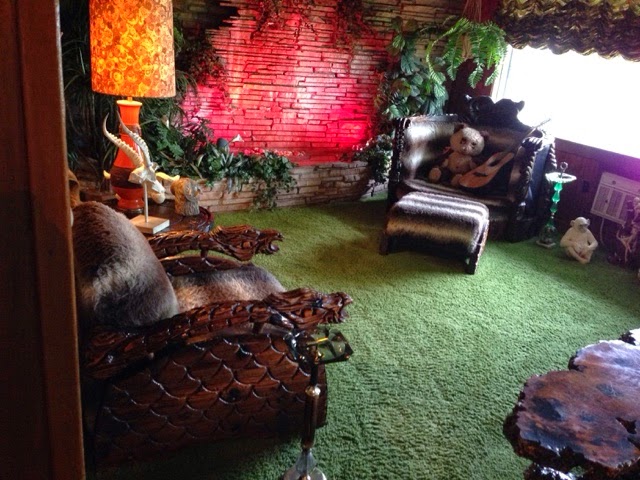 Behind the kitchen on the first floor is this ornate sitting room.  I was surprised about how much wood paneling was used in the house. 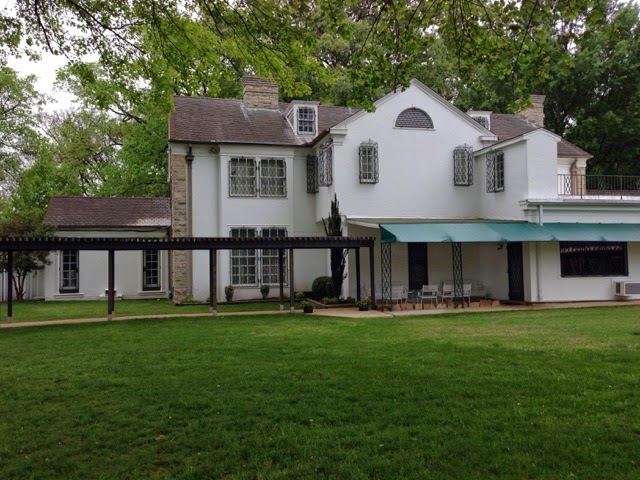 View of the rear of the house.  Out back is a garage where staff worked in an office inside. 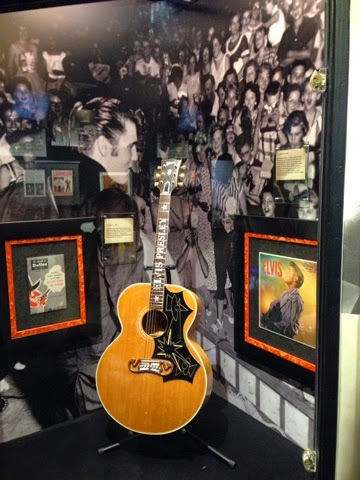 There is another building that houses all his awards. 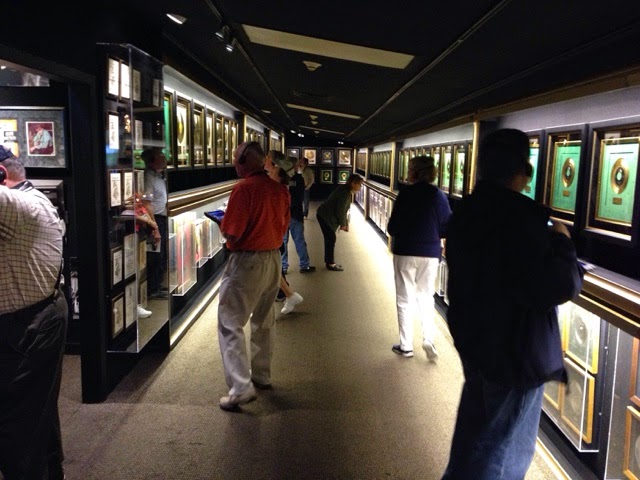 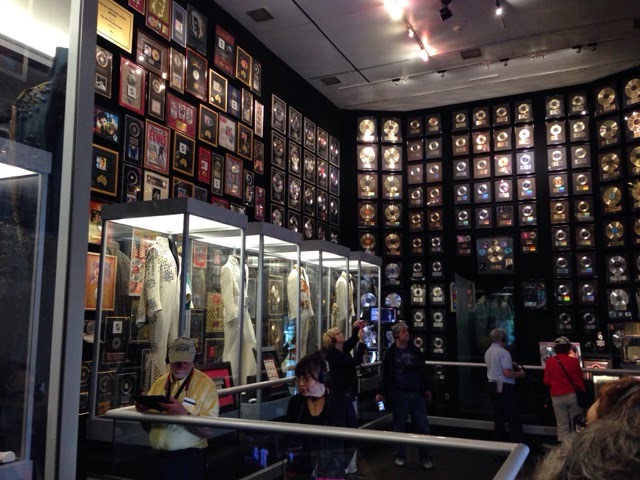 There was another building in the back  that was a handball court converted with memorabilia.
On the side of the house is Elvis Presley's grave sling with his parents. 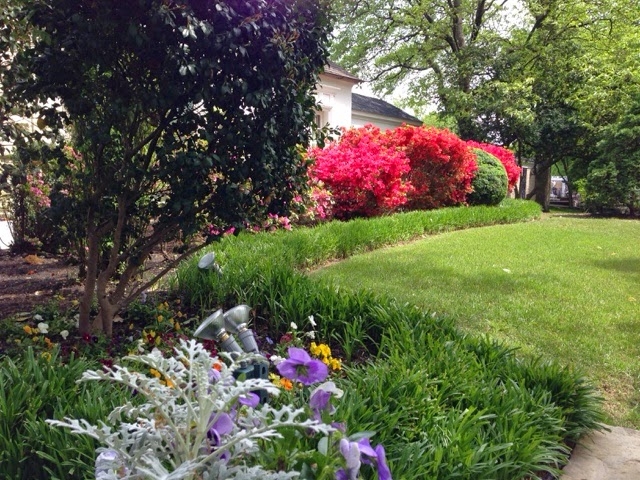 The flowers and shrubbery is beautiful. 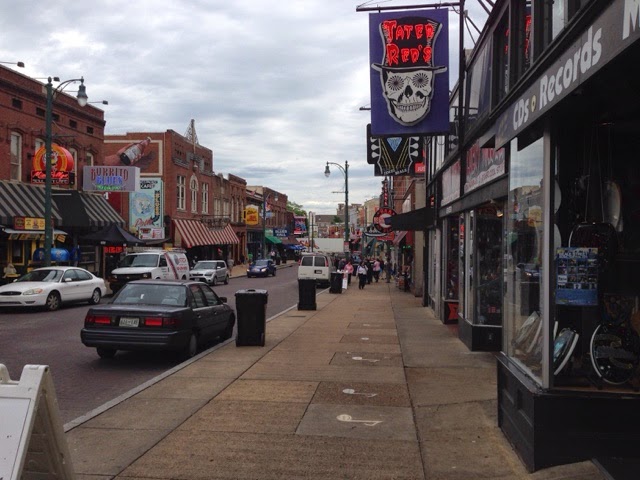 After visiting Graceland I headed down to  Beale Street in Memphis for dinner. 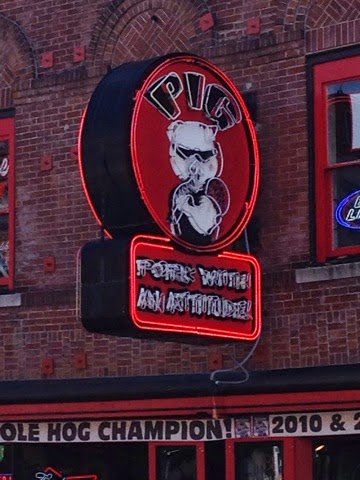 I choce The Pig on Beale Street to eat. 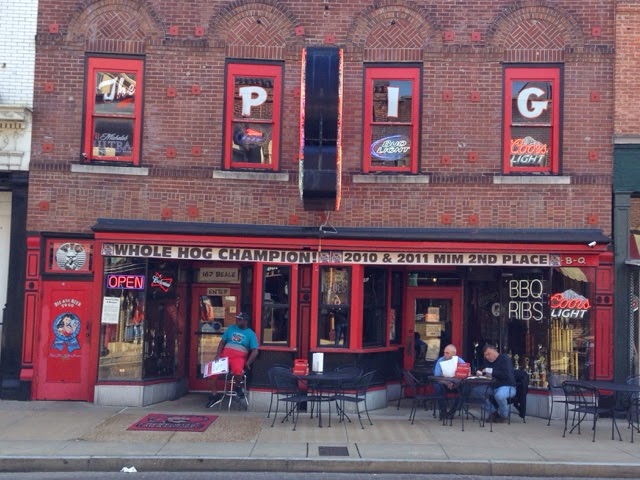 I ordered BBQ Pork Ribs with baked beans and coleslaw.  The food tased good but I felt it was a little light on quantity and it was served on/in foam containers and I would have preferred to eat with metal utensils.
Then their network went down and I needed to pay cash to leave.  The meal with a pint of beer in a plastic cup was $26.00 with tax and I don't feel it was worth it.  The last time I at here My son and I were doing a cross country trip and we ate outside the center of town and it was better than this.  Including the $5.00 parking garage and tip.  I would not eat there again.
It was time to go the Tennessee state park on the Mississippi River for the night.  I went to get a site with the ranger and he said the mesquteoes were very bad right now and they just had a couple leave as they couldn't take it. 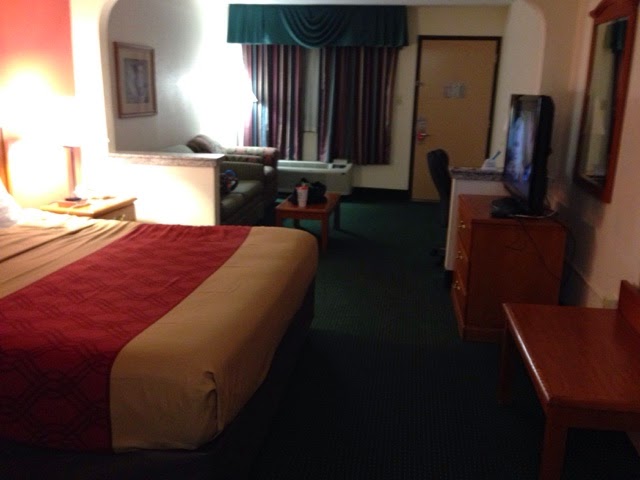 I decided to pass on staying there and my backup plan was the Econo Lodge for $53.00 with my discount for a suite before taxes on the northeast side of town.  There was another campground I was thinking of but it was south of town and since I am heading northeast tomorrow it will be a better starting point.
Brent
macaloney@hotmail.com
Posted by Brent’s Travels at 6:50 PM