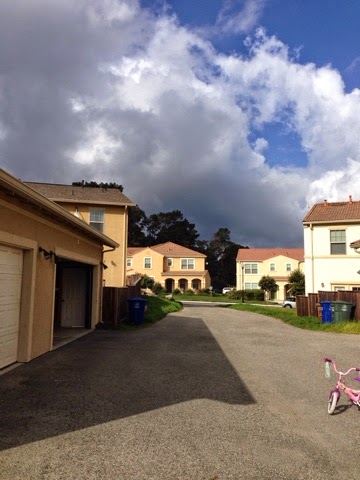 There were different clouds in the sky today.  These clouds are cumulus and they may give us a sprinkle or shower later today. 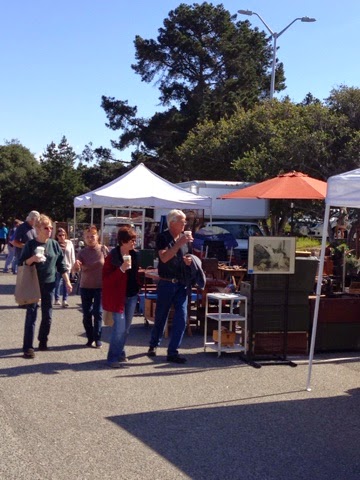 Today is Sunday and we will first go to an antique flea market at the college in town. 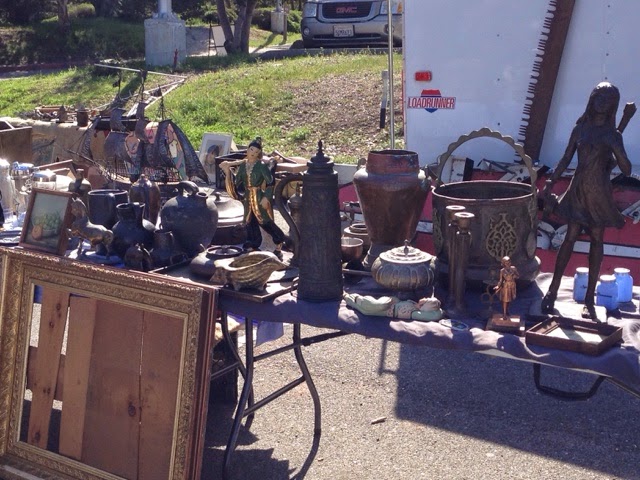 There was a very good veriety of different items.  I would rate this antique flea market as very good and worth while attending again. 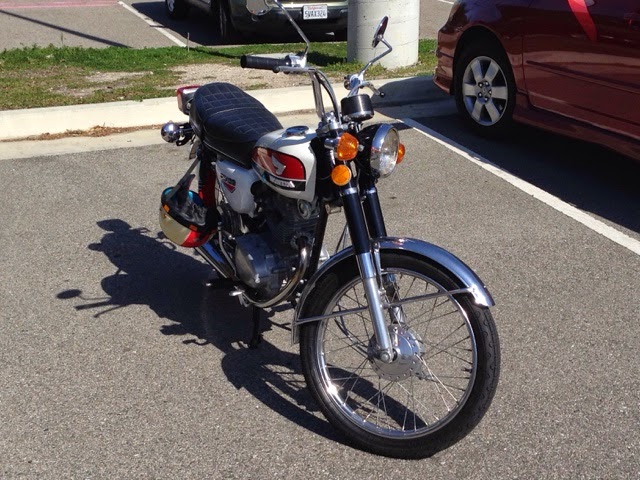 Not for sale, is this early 1970's Honda CB100.
I have one that is identical that I use from time to time.  This one is actually in a bit better shape than mine.  I was hoping the owner would have come over while I checked it out to compare notes. I can tell it has been restored. 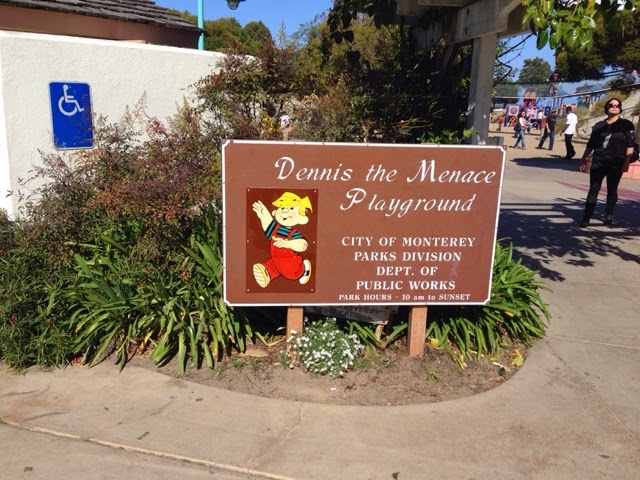 After the flea market we went across the road and went to Dennis the Menace Park. 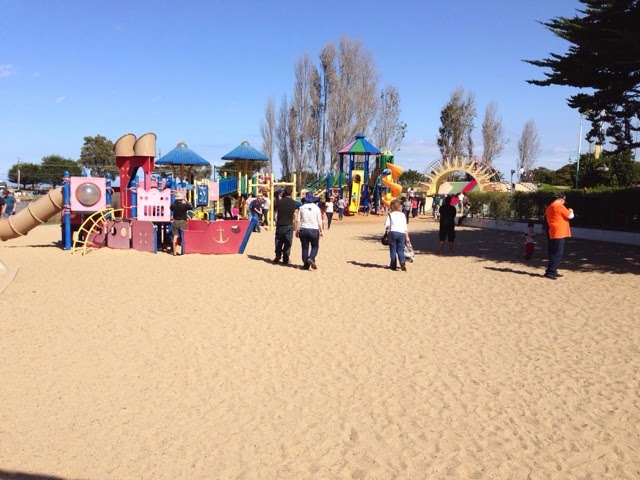 This park is large and a lot of interesting playground activities the granddaughters like to play on. 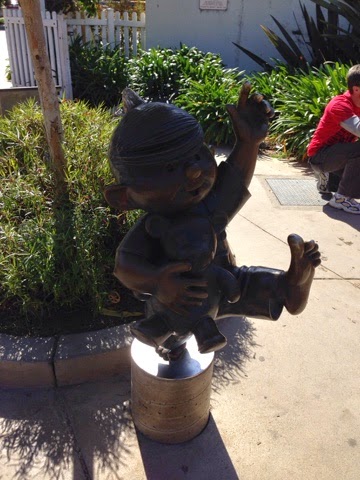 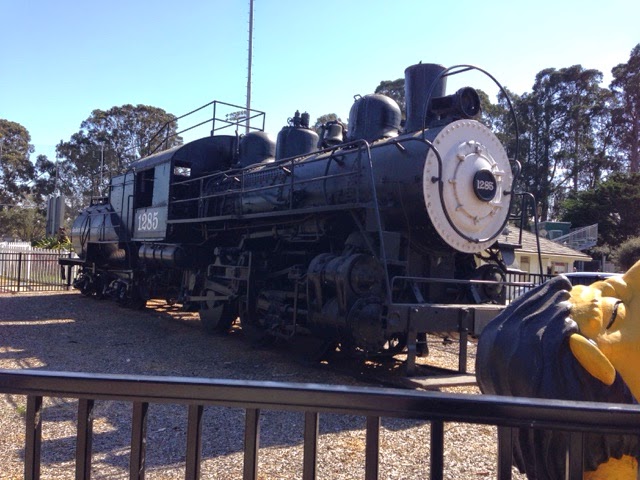 Across from Dennis is this old locomotive that the local military moved to this location in 1956.
After the park we had lunch at a small Jspanise Restaurant called Ocean Sushi. It was a nice all restaurant and we we were lucky to get there with our group of 6 to get two tables together prior to the rush of what appeared to be regular patrons.
We left the car there and headed off on foot through the center of town to Old Town to the multipurpose trail I have mentioned before. 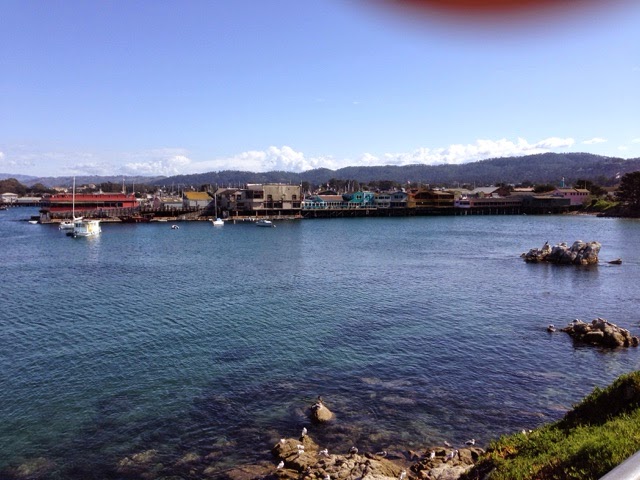 Here is a picture of the side of Fisherman's Warf.  Our walk took us by the parking lot in font of it. 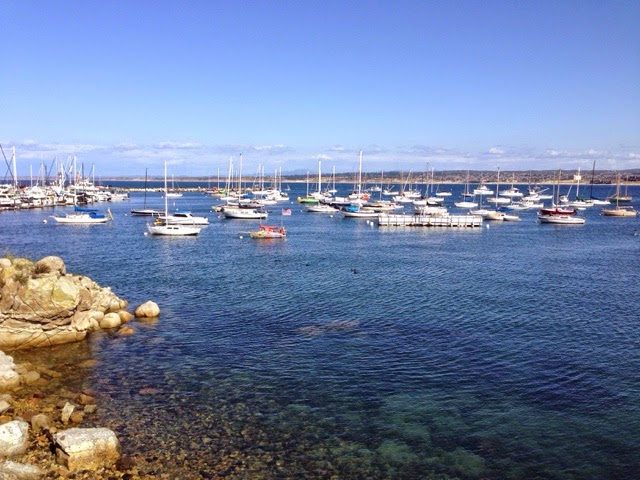 Being Sunday there were a number from the marina that were out in Monterey Bay. 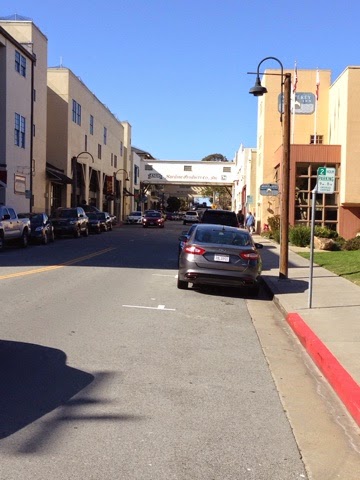 This is the first section of Cannery Row that you come to heading out on the peninsula. 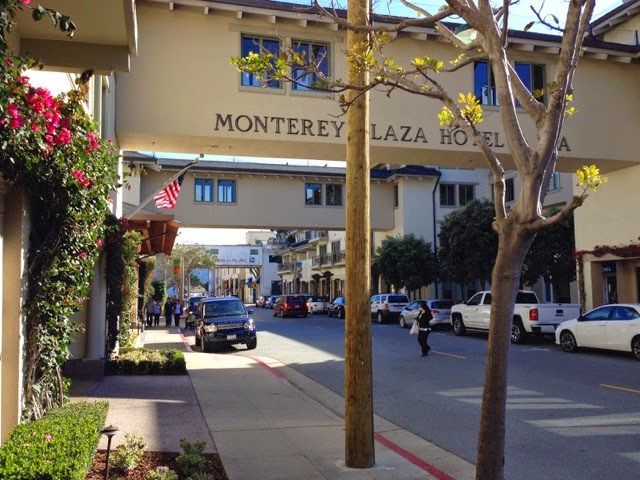 Some of the remaining cannery buildings have found a reuse.  Here a large hotel. 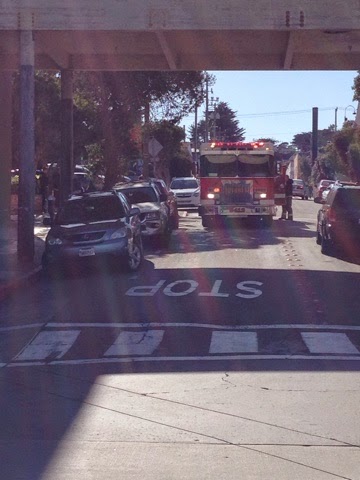 Here is Monterey FD on a call. 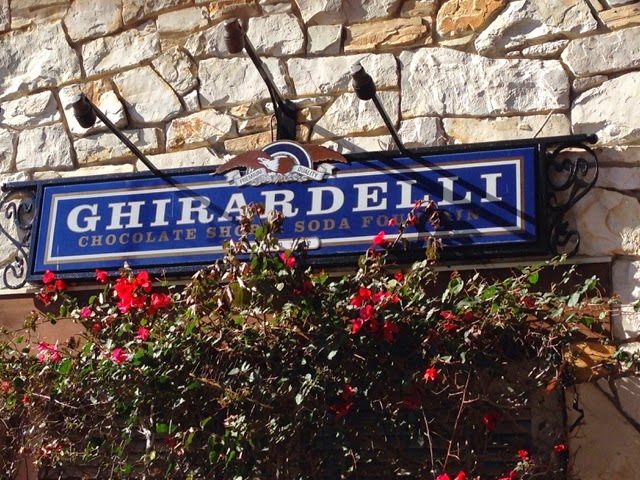 In the second grouping of Cannery Row are more smaller businesses.  Our destination was to Ghirardelli for ice cream. 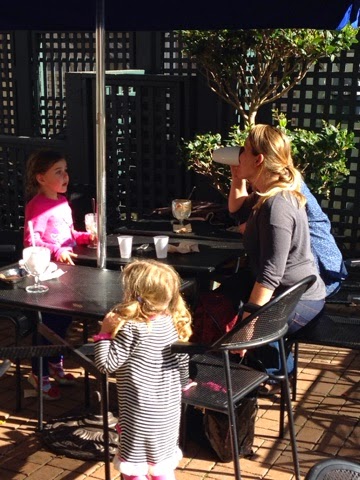 We sat outside and while enjoying our ice cream there was a thud and something fell off the umbrella we were under. 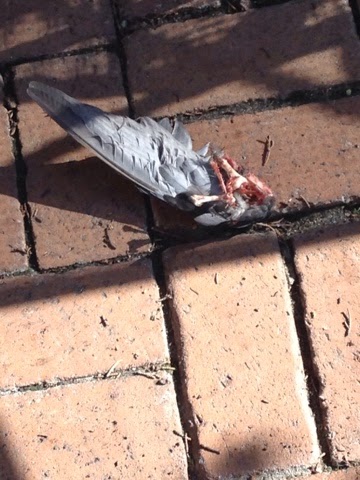 I actually thought a squirrel fell.  Then I was told it was part of a bird,
It was just that.  There was a very large tree over us and all I could figure was that some much bigger bird was having this bird for lunch and lost the wing and some connecting parts to gravity.
Son Clayton and I found great humor in this random situation happening.  The granddaughters are young enough to not bother them.  The woman were grossed out.  In retrospect we were lucky there was an umbrella as it would have landed on our table and possibly our ice cream. 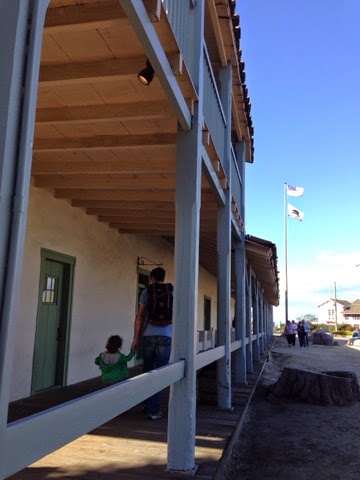 Our return trip brought us back down the path to Old Town.  Today being the last Sunday of the month the State buildings are do not charge and entrance fee. 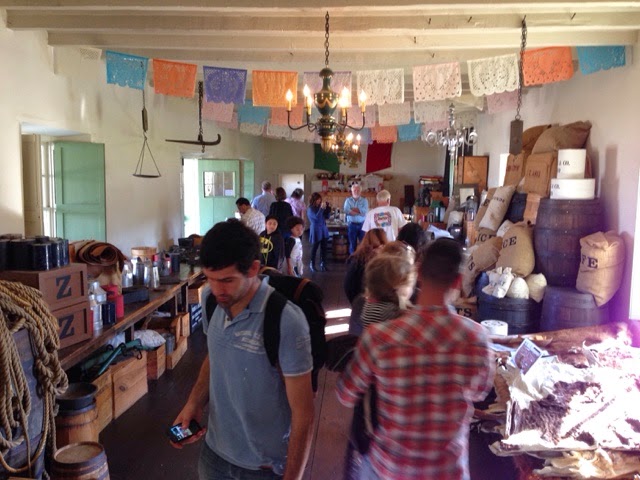 The Customs House, the oldest State of Calfornia building, seen in the picture above.  It was used to apply tariff to goods shipped here. 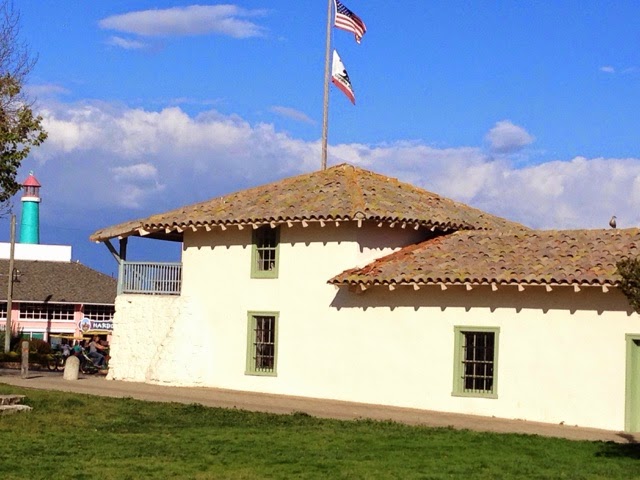 Across the court yard of the Monterey State Historic Park is another State building that has an Indian history display on the second floor. 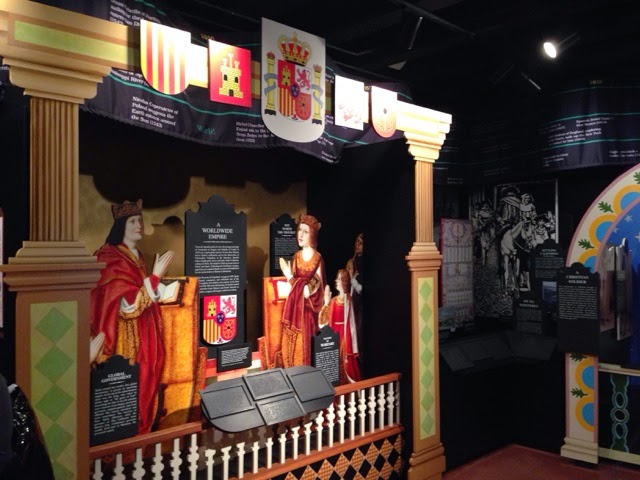 The first floor has the chronological history of the area. 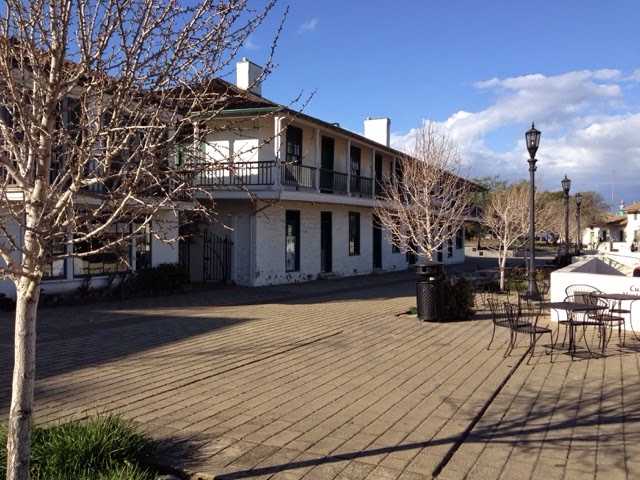 The State buildings arevinlybopen on weekends.  We had stopped by the other day but they were not open.
The sky got dark off to re north late this afternoon but it didn't rain while we were out today.
Brent
macaloney@hotmail.com
Posted by Brent’s Travels at 8:29 PM