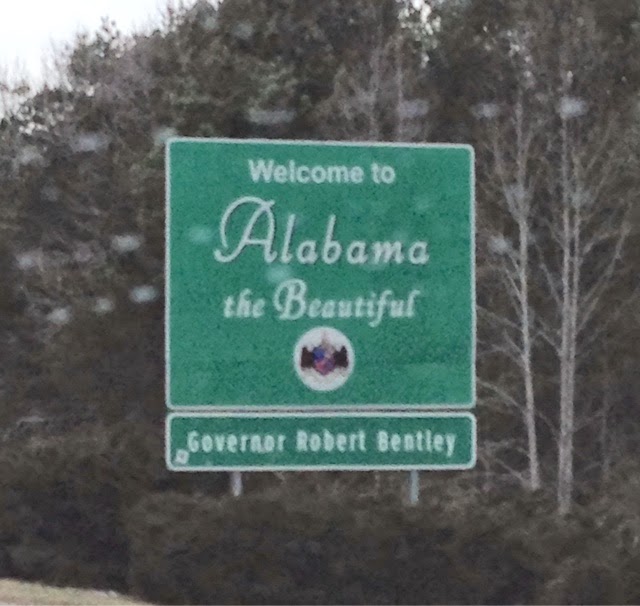 I said goodbye to my cousin Ramona & Husband Doug this am and I was on the road to Mississippi at 8:00 and 42 deg.  The heavy rain over night had ended and I will be driving into clearing skies as I head southwest.  When I entered Alibama I also entered the central Timezone.  That gave another hour to get to my destination today.
My trip to Biloxi followed the same general roads as last year with the first half of the 7 hour travel time trip on secindary roads going through rural northwest Georgia then down eastern Alibama. 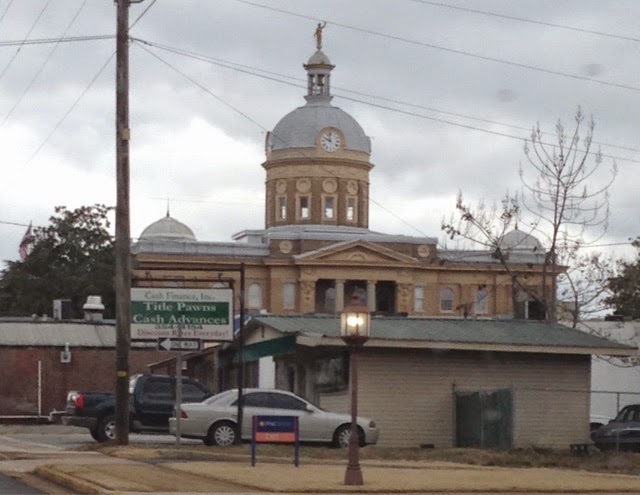 There was one town that I drove through that has the county courthouse (above) in the town square.  This is Clay, the county seat. Unfortunately it still looks like it is having hard economic times as thereare many  commercial buildings empty.  It's a shame as it is picturesque.
I did stop at McDonalds on Clay as I did last year.
Denise shared the latest winter storm that closed schools and nonessential government offices. 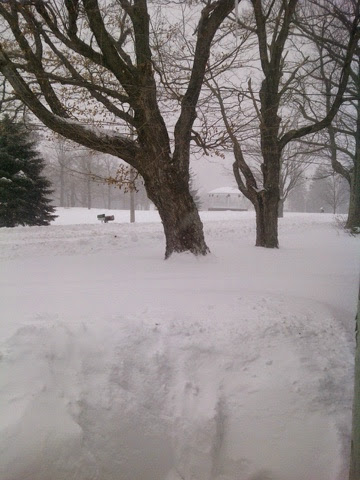 There is a street between the large maple trees and the fir tree/mail box
This is the third big stom at home with the blizzard the middle one, and with no melting puts the snow depth about 4 feet.  I don't feel bad about the snow flurries and 37 deg in Clay when I see what is at home. 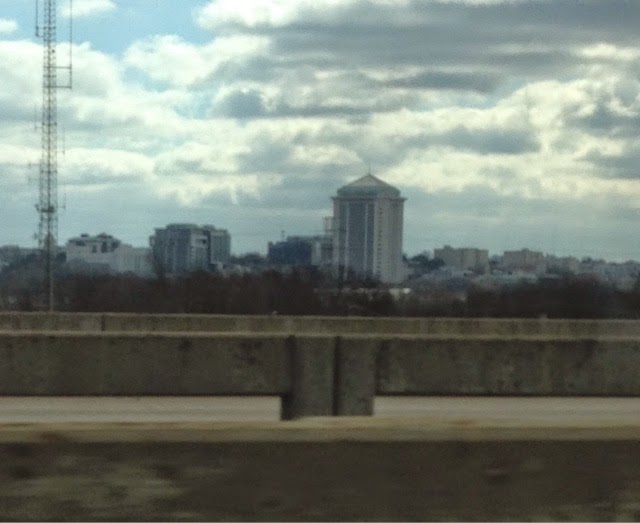 I like this ride as it is rolling hills until you get to Monthomery, AL (above) where it flattens out and I got on the interstate to head toward Mobile, AL. 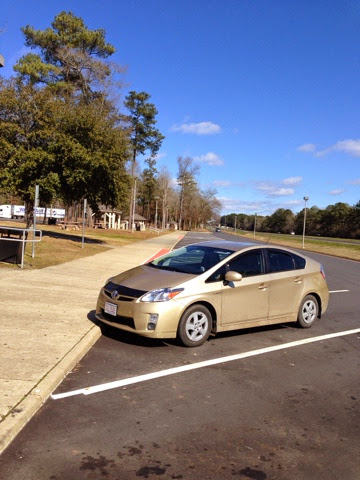 I stopped at a rest area about half way between Montgomery & Mobile.  Sunny and high 40's.
Then it was on to Mobile where I pick up I10 west that I will be traveling on or near it to Arazona. 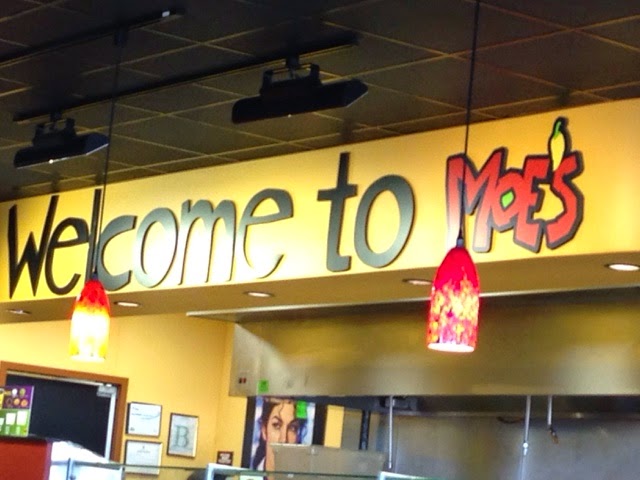 I stopped at a Flying-J truck stop for gas at $1.89/ gal and had a Moe's burrito for dinner.  The billboard on I10 said get off here for historic US90.  So I did head down to the ocean where US90 is along the gulf coast and it was 52 deg. 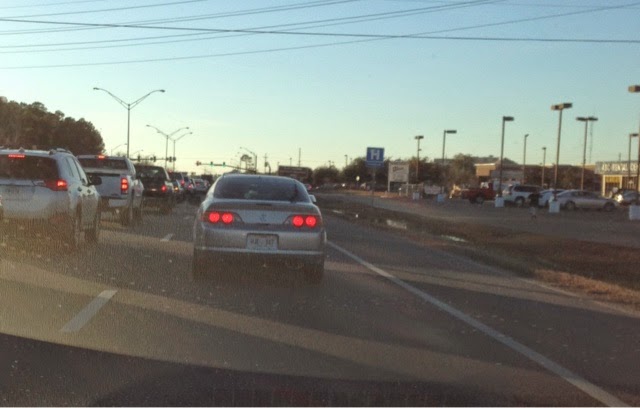 Traffic was terrible and the sun was setting in my eyes, but I didn't mind as I didn't want to get to the Hard Rock Casino too early. 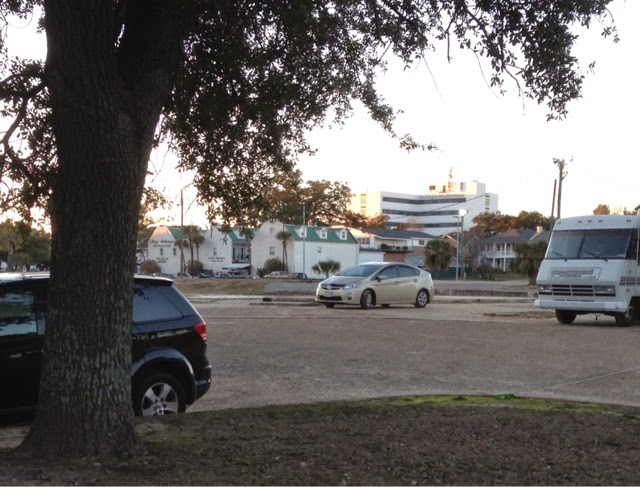 I arrived and parked in the Hard Rock lot across the street with s couple other RV's. I figured this would be better than trying to sleep in the multilevel parking garage.  This is where I parked last year and where they allow RV's to park.  Some other casinos offer the same.
Here is my view from the car tonight with flashing lights and traffic it doesn't bother me 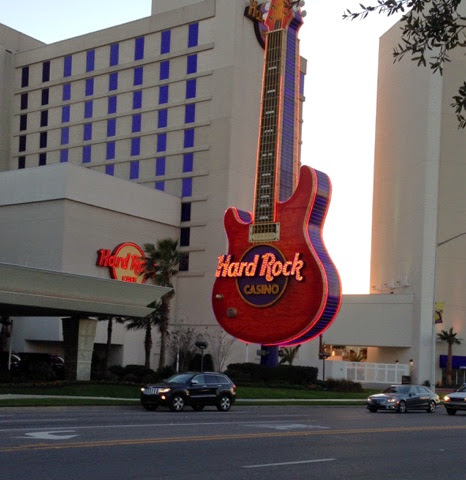 I went into the casino for a few hours & played a few slots and made back what I had initially put in.
The free WIFI followed me to my Prius.  Although slow it is adiquate for posting my blog.
On the way here I passed 3000 miles so far on this trip.  About 12000 more to go.
Tomorrow it's on to TX.  Once I get to Texas it is about 900 miles from the LA border to Where you enter NM by El Paso.
Brent
macaloney@hotmail.com
Posted by Brent’s Travels at 7:18 PM