Getting To Meet People

I arrived at my third and last campground for awhile as I am back in Leesburg Tuesday.
Again there were no "OK to ask Walmart's" in the area that I wanted to stay the night.  I have gotten to figure out the less costly campgrounds using AllStays App on my phone.  The key is to look for who accept tents.  That means that they are not just an RV Resort. 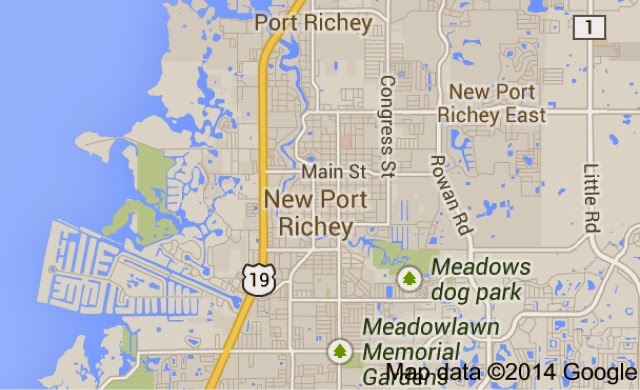 I called such a place in New Port Richie from the camper application and was told it was $34 provided I had cash, which I did.
I was given a site all by myself with just water and electricity.  I appreciated the electricity as I run off a separate battery that doesn't yet charge off the vehicle yet.  (Project for the road.). I did bring the 900 watt generator that the guy I bought the camper from and could use this, but plugging in saved me the time and effort.
I was directed to the site on a map and parked to walk the site before backing in and I was promptly greeted by a man on an electric cart.  Most people I have met are my age or older.  Ok mostly older.  All are friendly and offer assistance and advice.  Although probably not true, I often get the feel that they may also just like talking to someone new.  Theman on the cart seemed to be the rule enforcer.  Ensuring exactly where I park.  He said line up the drivers side of the van to align just to the left of the electrical box and just to the right of the water spigot.  There was possibly 12 to 18 inches between the two.  How this was important I have no idea as the spot given had no one to the left and the guy wo checked me in said I could take either since there was no one else on the right. In fact I don't think he works for the campground he just wants order.
At this campground I met a man from Kitchner, ON.  I not only knew where Kitchner is but I had been there back in the 90's when I spoke at the International Association of Arson Investigators (IAAI).  I went and spoke in front of 500 people.  It was invigorating and nerve racking at the same time but something I had planned and wanted to do. It was my pinnicle I put in front of myself to get over my apprehension of speaking in front of groups.  For years before this I dad worked up from small to large groups with 200 being the largest group before.
Sorry for the digression but when I meet people I try hard to connect with them and this friendly late 60's man had a warm personality and was easy to talk to.  He updated my dated frame of reference of Kertchner by telling me how much it has grown as a distance subburb to Toronto.
If I was staying for awhile I think I could get to like him.  He was easy going and was no nonsense.
Most people I meet at campgrounds are morning or evening greetings for the brief time I spend each place.  Although I have been at my aunt's park a few days I have not met the same people twice.  The first campground had people on both sides of me allowing me to be social.  The last two I didn't have anyone around me that was visible to meet.  The Canadian I met I stopped him to ask about getting rid of my rubbish and recycling.
Posted by Brent’s Travels at 7:50 PM