Cousin Joan and I met on the internet a few years ago through another cousin Fran who lives in Houston, another future stop on Brent's Travels.
Joan is in her late 60's and recently diagnosed with nonhodgkins lymphoma. She has had other physical challenges in her life and I would expect her positive attitude will help see her through this hurdle too.  Joan and Fran have the same grandfather and my grandfather was a brother to theirs.  We also share the fact that their grandmother was a sister to my grandmother.  Yes two brothers married two sisters.  It's like being double related.  To toss some more confusion into this picture.  Our great grandfather MacAloney lost his wife and our great grandmother Parmenter (our combined grandmother's mother) lost her husband and our great grandfather MacAloney married our great grandmother Parmenter.
Confused?  In summary two brothers marry two sisters and the parents married each other.  I don't know what you call these cousins but it is more than just cousin.
Joan lost her husband 2 years ago and moved her to be near family.  I would move for the weather.
Because of her current medical sitiation she can't do everything she likes so she has taken up sketching people.  Here is an example of her sketching.  This is her family. 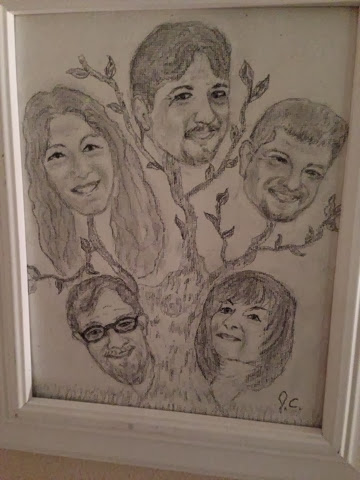 Joan was the president of her condo block until recently.  She has a lot of nice friends that live in her unit.  I got to meet a couple of them earlier.  One had a Scandanavian accent so we briefly talked and she is from Sweden.  I worked in Copenhagen Denmark for 3 months back on the early 1980 and had taken a tour of Malmo while I was there.
Joan starts her chemo in the near future and I wish her the best as she fights the cancer battle.
Posted by Brent’s Travels at 4:06 PM