Today's adventure was to visit my mother and aunt's bingo buddies Bib and Aleese Hardwick at the villages.

I have been hearing about "The Villages" for a few years from many people that claim that it is the place to own and live in Florida.
My job was to put the chauffeur hat on for a second day in a row and drive the ladies in the baby blue Grand Marque the 45 minutes north from Leesburg to this wonder of the world called The Villages. 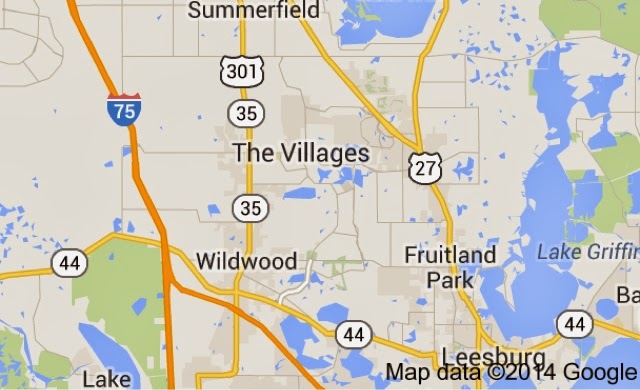 There are many housing developments in FL, but as we entered The Villages you could see the change of the development norm to what I would refer to a look of southern Connecticut with lanes past white picket fences of open polo fields and then rotaries with entrances to the individual villages.  We were looking for the village of Springdale.  Within each village there are different types of housing.  The Hardwick's live in the Fairlawn Villa section.  On the map below it would be to the right of the lower of the two rotaries in the light green section on the map right below. I have to say it was very nice and I wasn't there for a tour or even explored the area to any extent.
Bob and Eleene in their early 80's live in a 2 bed 2 bath villa on an outside corner lot with their bulldog Brutus.  They maintain a condo in Indianapolis, IN where they go to live in the summer.
There was one chalange in getting there. Each Village is a gated community so I drove up to the gatehouse and no one was there to open the gate.
Looking to the rear drivers side before the gatehouse I saw a pole with buttons and a speaker.  I now had a car behind me and I would guess they were not pleased with me holding up everyone.  I figured I had to push a button and get buzzed in.  Since I couldn't back up I had to get out of the car.  There are two buttons with a speaker.  One button has no label the other says help.
I push the unlabeled red button and I get no speaker response so I push the black button.  The woman waiting I'm the car behind yells to me that the gate is up.  I run forward to the car as the gate started to go down.
I go back to the pole with speaker and buttons and the woman in the car yells the red button.  I push it and as the gate goes up I run for the car and get in while the gate is up.
Really they couldn't label the red button as push to open gate and have a sign to know to use the pole and not look for someone.  What is wired is that the woman behind used an RFID card to activate the gate.  I questioned what kind of security this was if all you do is push a button to get in.  See answer below.
We arrived on time for our visit before our lunch date.  Bob likes to kid around and Aleene is more serious, but pleasant as a host.
With an hour behind us of my mother and aunt catching up from last year we had lunch.  After lunch there was more conversation and then me providing some computer wireless network advice to Aleene.  The next thing we know our arrival at 11:30 am arrival turned into a 6:00 pm departure.
Ok, so Bob told me that the gate security used to have a guard, but when the county took over the responsibility for the roads in the villages the roads became public and the guards were removed but the gates were not.  The gusts like us open the gates by pushing a button and the residents use their RFID card to get in.  Logic?
Posted by Brent’s Travels at 5:54 PM