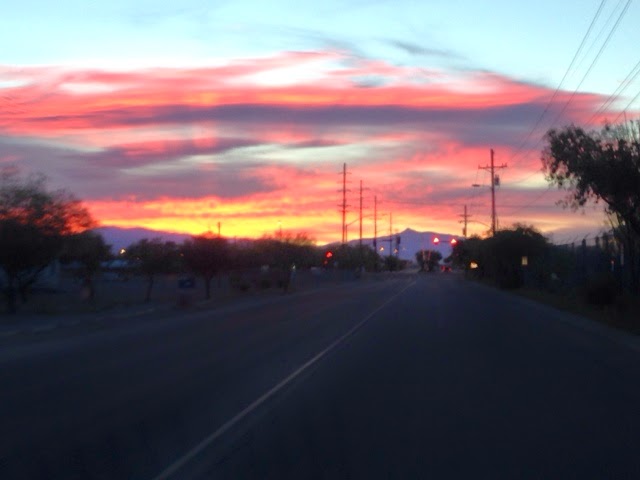 The clouds this am made for a colorful sunrise.
The temperature here has really warmed up this week with daytime temperatures into the 90's and about 60 at night.  This is up from the lows in the 40's and highs in the 70's.  Either way I have been wearing shorts and tee shirt everyday.  Just the way I like it.
I was at McDonald's before 6:00 as I woke early and wanted to get a round of disc golf in before the daytime heating set in.
I went to the closer of the two parks with good disc golf and I had a good game.  Today there were two other guys that had also come to play by themselves.  I normally only see groups play so the three of us playing by ourselves was unusual.  The guy behind me and I talked a bit as we passed each other.  He played with one disc so he was faster than me as I often play two discs to get more practice throwing.
After my disc golf game I wanted to find parts for the campervan.  I had the broken flip door for the shoreline power cord.  I had previously written about this in an earlier blog. 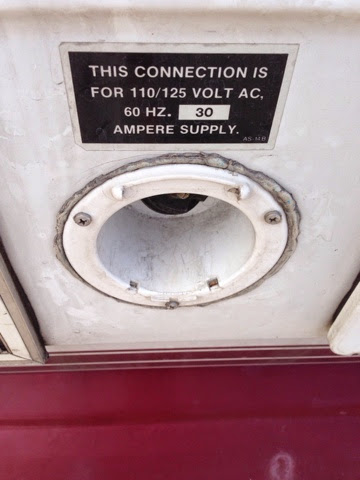 The new unit I bought as a replacement from Camping World was a bit smaller so I returned it.  it would not fit in the existing mounting holes, so my quest today was to find the exact replacement.
I looked up RV parts on Google Maps and found a place 3 miles away so I went there.  The man at the counter was very nice and advised I needed to go to Sandy's RV, one exit west on I10.
I drove to Sandy's and met Sandy.  She and a young man who work the front end were very nice and she picked out two replacement electrical cover units and one was the exact match to the one I have.
I then moved on to needing a replacement porch light lens that sits on the outside if the camper at the side door.  The lens was missing when I bought the campervan and I wanted to see if I could get a new lens to replace the yellow plastic tape that was used as a temporary lens. 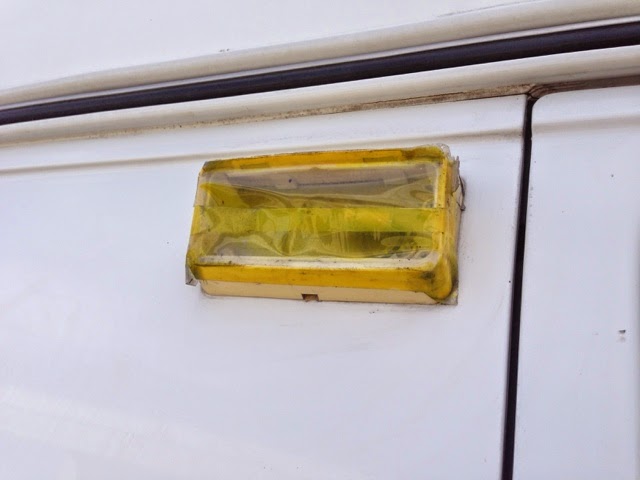 The first lens we tried was too short left to right, so we tried another and it fit perfictly.
I was now off to a city park to work on replacing both items.
When I say the part I bought was a direct replacement it was just that and looks original. The lens cover replacement required some cleaning the dried glue from the tape that left residue on the housing before moving forward with putting the new lens on. 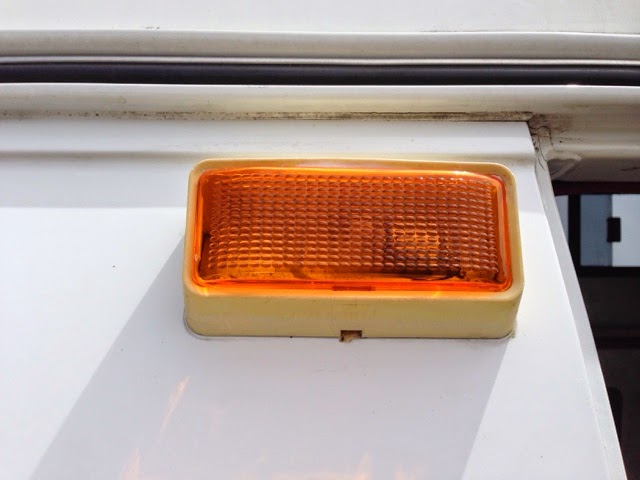 I had a little difficulty having the new lens stay in the tabbed slots as the housing had warped at the top edge thus the tabs would not securely hold.  So I used some vinyl caulking on the top seam and set the lens into the fine bead of caulking.
I can see why the old one was missing as the plastic warped and it fell out on the highway.  The caulking acts as a temporary adhesive that will allow me to get the lens off in case the bulb burns out.
With the repairs done it was time to give the campervan a bath.  It was covered with 9000 miles of road grime.  I went to a self service car wash that you feed quarters into.  The dirt came streaming off under the pressure wash.  Then I soaked it and foamed the wheels and the spray it again and it is looking great.  Well worth the few dollars to wash it.
Then I was off to get my dinner at Food City.  I bought frozen pieces salmon and green beans.  I already had salad.  Since McDonalds is next door I synced my devices and got my iced tea for dinner.
It was my last night hanging with the others at the casino parking lot  Here we all are tonight.
On the left is Duane.  He is a regular her but has been traveling the last couple of weeks so tonight was the first time I met him.  Duane has been doing this for 20 years and had been all over the US except New England.  Dan's camper has the same Chevrolet G30 chassis as I do except he has tandem wheels in the rear. His was built in the late 80's and he is looking to downsize as it is too large for him.  He would like to get a Toyota camper thebusedvto makevon the T1000 chassis. 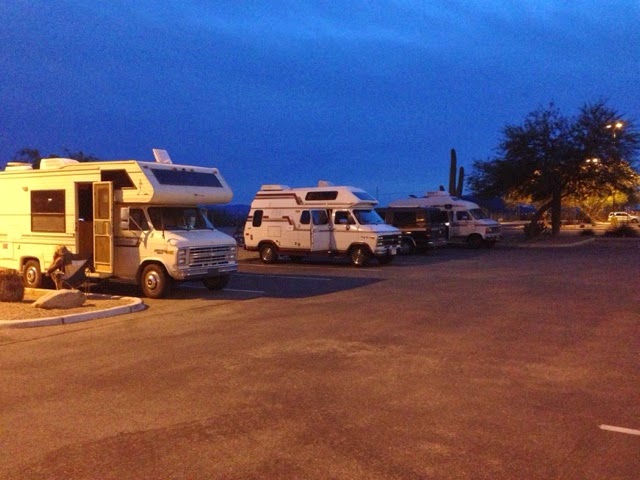 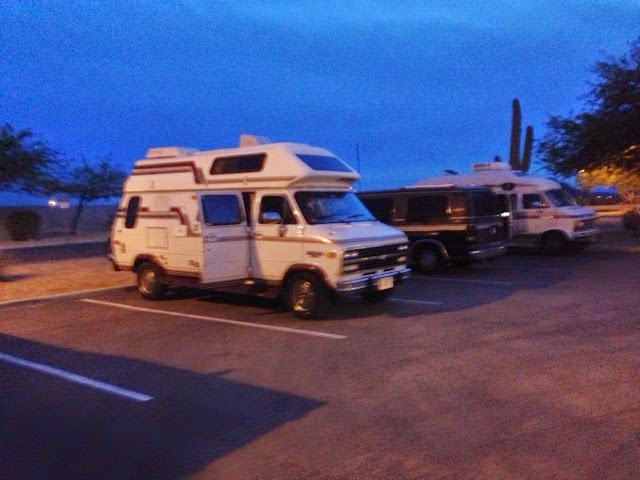 The regular van is Jake.  Jake and I have never spoken.  I have never seen him out of his van.  He and Dan have known each other for a long time and when he had a medical emergency here in the parking lot some time ago Dan got the ambulance and was there for him, while he was in the hospital for a month. Last in line is Dan.  Dan has been doing this since 2007 as I mentioned in a previous blog.  He isvery sociable and we have talked every day.  We both have our routines during the day and we get out of the parking lot early and go do our thing and return at the end of the day.  He will be moving to Flagstaff, AZ in about a month for the summer to get away from the 110 degree daytime temperatures. 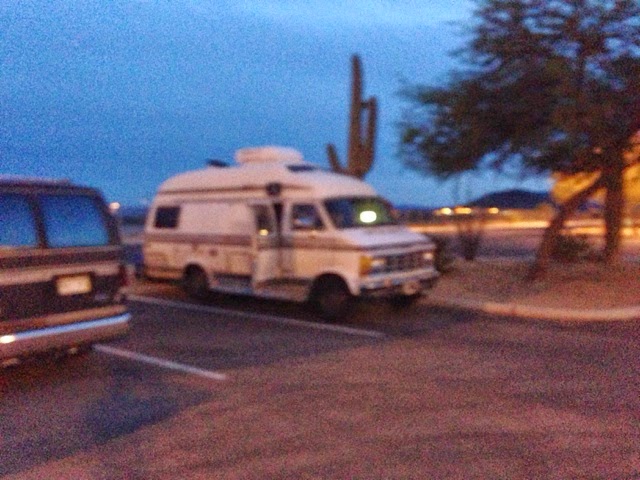 Lastly there is Jim who has a camper like Duane's and he parks his at the business he works for across the street.  He walks his Mexican Hairless Dog through the casino parking lot each evening as we all talk.  He is the one I helped with getting his generator running in Sunday.
I have enjoyed this phase of my trip like the other phases, but the next two phases are ahead of me.  First, I am going to San Diego and wait for Clayton to come home and hang out with the girls and I get to see Denise after about 3 months as she flys in on Tuesday for a week.
The last phase is my trip home that will take about 10 days.  I am looking forward to both phases and writing about them as I continue to experience this great country and all it has to offer.
Posted by Brent’s Travels at 7:19 PM