It was time for another hike as it has been a few days since the last time I climbed South Mountain in Phoenix.
There are a lot of places around Tucson to hike, mountains are on all sides.  The goal was to find a place relatively close and challenging enough.  The word challenge to me means that the verticicsl elevation change of about 1000 ft or more.  I am just not challenged by less.
My choice for the day was the Wasson Peak Loop Hike in the National Park Saguaro Lamd. 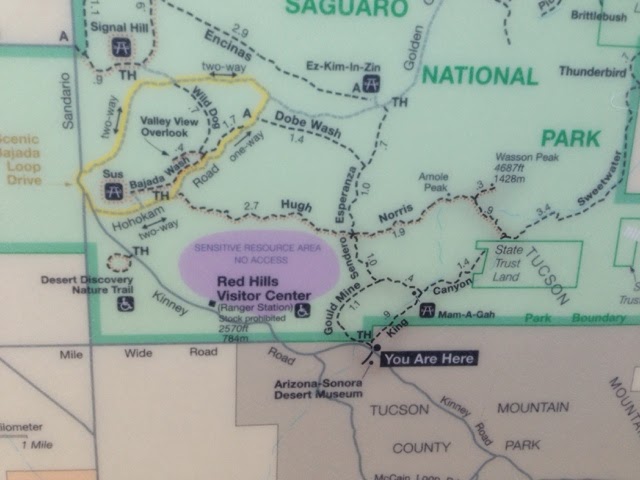 The trail head was a bit difficult to find.  I used AllTrails and it gets me to the neighborhood. I was about there on the software and there was a dirt parking lot with no sign and I pulled in and it was the trail head.
The map above is about 500 ft up the trail away from the road.  This trail is a loop but you can walk it up and back but I will do the loop of 7.7 miles and over 1500 ft vertical elevation to the top of the mountain for the trail head.  AllTrails allows me to track my progress on the trail if it is loaded in the software.  This is a nice feature when you want to know where you are especially when there are trails that intersect.
Wasson Peak is the peak to the left.  The trail head parking was nearly full upon my arrival just before 8:30. 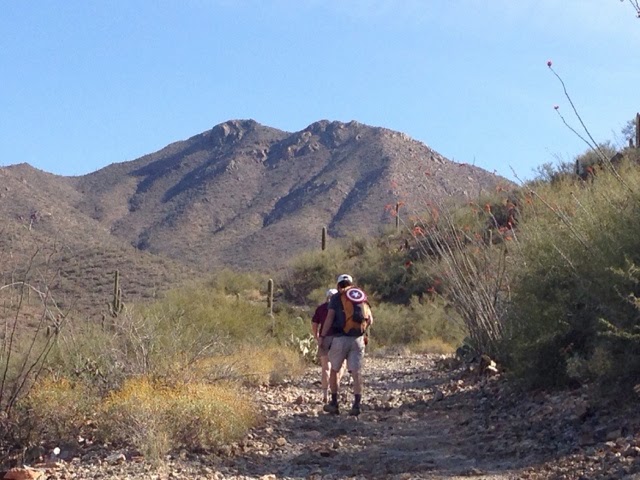 Of the two ways up the mountain the one I chose to hike up was gradual for the first half.  The second half was steep requiring switchbacks to make the steep grade. 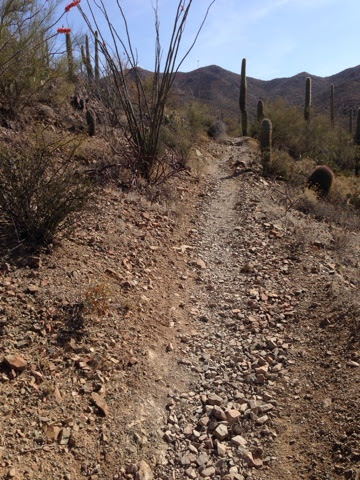 I was treated by some of the best desert flowers throughout the the saguaro filled landscape. 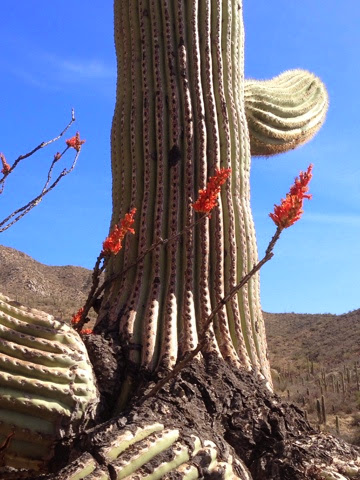 On the dryest soil floweres grow. 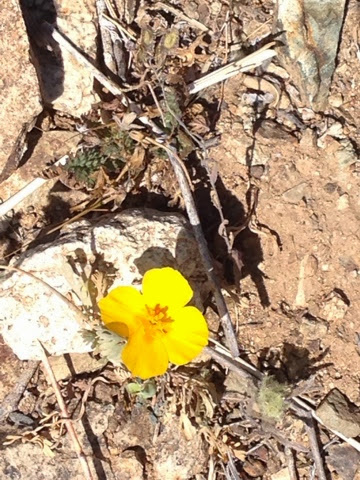 I met a man that was about 70 years old coming down just below the halfway point.  He was a bit frail and was wearing a sweatshirt and sweatpants and swetting a lot.  He only had a small bottle of water that was 3/4 consumed.
I stopped him and we briefly spoke.  He said he was with a group and the group leader sent him back for not having filing poles.  That may have been what was said but I would have sent him back for lack of water and wearing inappropriate clothing.
This is looking at the trail I came up with the Desert Museum complex below. 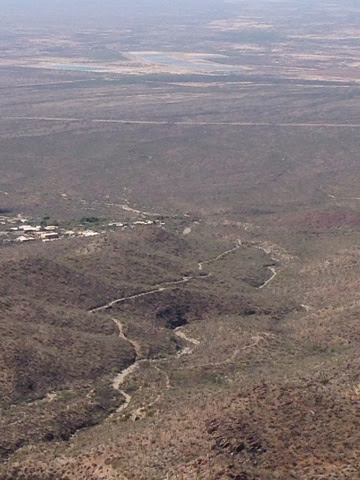 The peak is over there and you can see the trail circumventing the tip to get to the top. 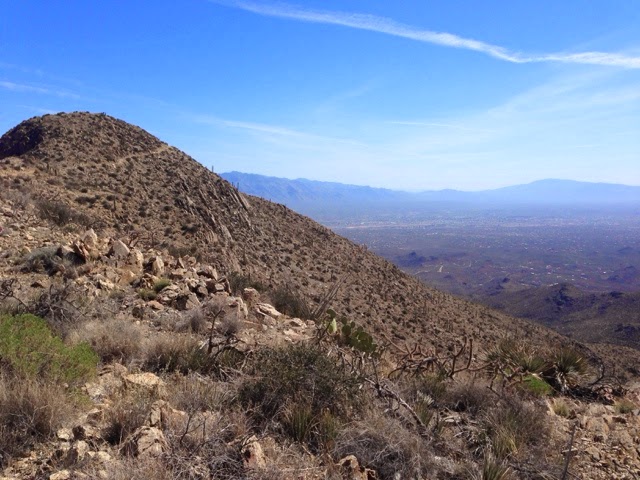 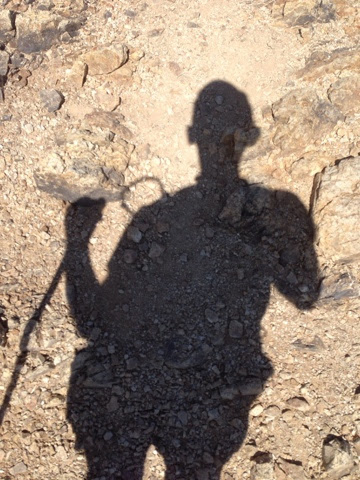 Ok here is a selfie done at arms length. 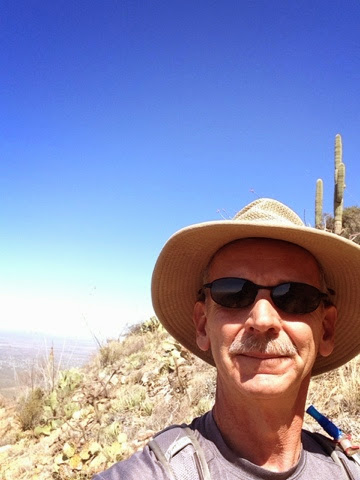 I looked up into the sky and looking south I saw this contrail with a bend in it.  I am guessing that wind currents did this but there is an airbase in town and I guess it could have been one of there planes that did this.  Anyway, it looked great with the neighboring mountains lower in the distance.
The mountains way off in the distance are next to the Mexican boarder near Nogalas. 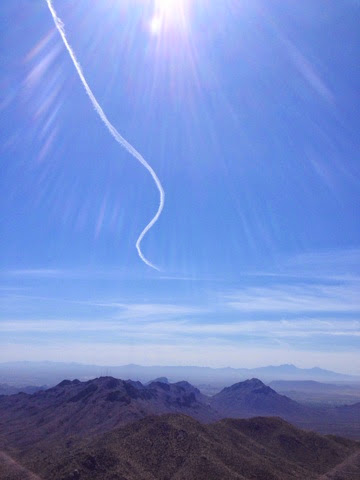 The return loop trail brought me to the north face of the mountain.  With less harsh sun and retained posture floweres were more plentiful. 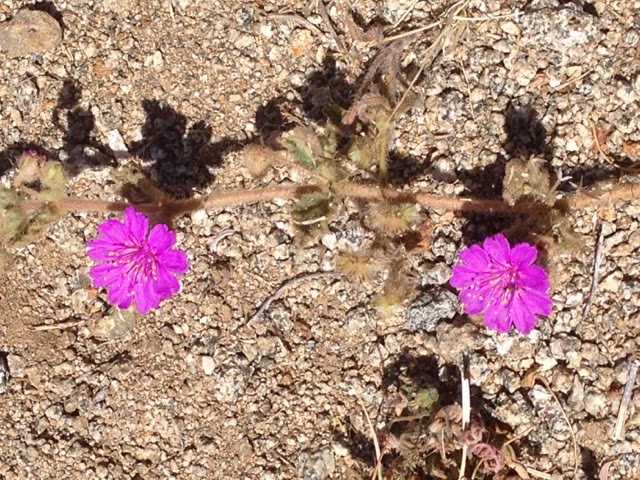 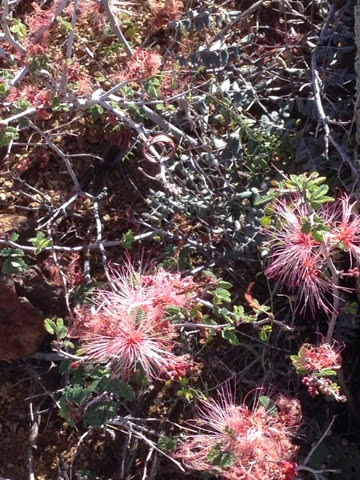 Then out of the corner of my eye I see something moving and it was my first large reptile.  I see all kinds of small lizards scurrying around but this guy was much larger. 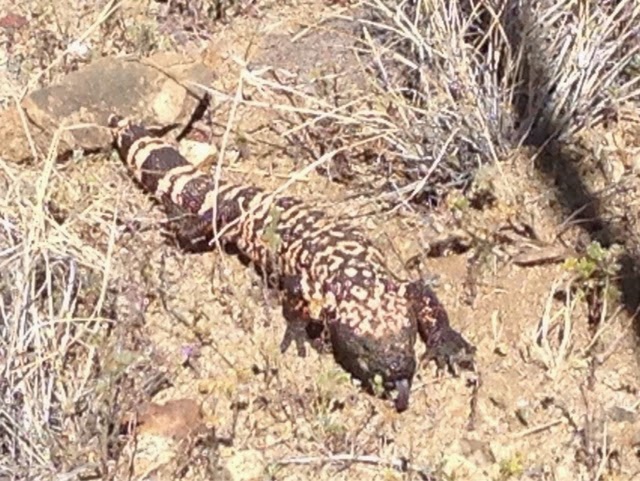 Back to more flowers. 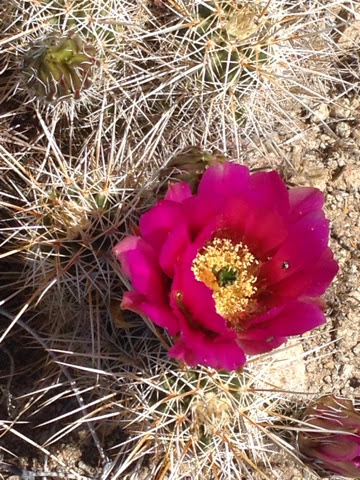 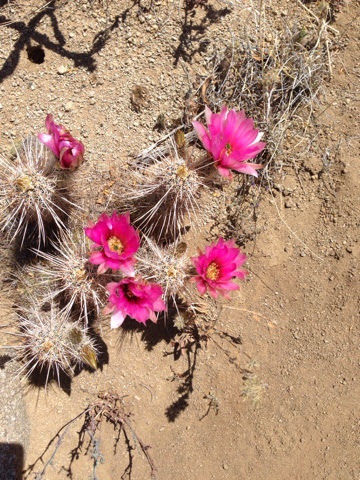 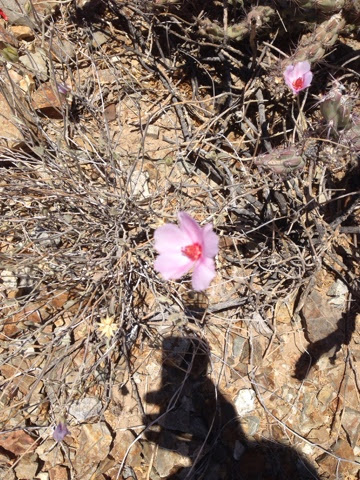 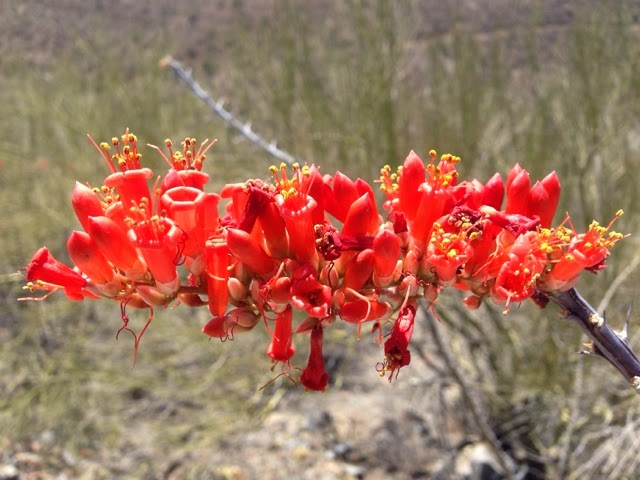 The trip down took 2 hours also as it was a little longer.  With a 1/2 hour at the top the round trip was 4.5 hours.
It was an excellent hike and when I was at the top I saw a mountain that is north of Tucson and it was taller than this one.  That is some ting I will have to see if I can find a trail to hike this before I leave the area.
Right now I am thinking on staying in this area for up to a week as I have a number of things I found that I would like to see.
After stopping at a park and making dinner I tmreturned to the Casino and I got to talk to Dan, the man with the van like mine.
Last night there was yet another van like ours that stayed overnight.  I asked him about it and he said he believes that a woman is traveling by herself.  Her door was not open to introduce myself.  Possibly another day as I would like to learn her story.
Posted by Brent’s Travels at 4:03 PM