I am looking forward to Brianna coming today to join me on some travels.  Even though I have been to all the location we are going this week, there are new things to do and it's always fun showing someone around.
Today was a transition day to pack up the camping mode of living and shift to hotel mode for 4 nights.
I was up early at 6a to use the showers as the overflow lot was full last night with campers, some coming in late.  I would guess we grew from ten to 30 campers in this area.  There are two men's showers so there will be a point when they will be both occupied and I didn't want to wait.
After picking up and leaving my camping site I went and used the dump station and I was on to hike Usery Mt for a second time during my stay.  It was 9a and I knew from previous experience that hiking in the Phoenix Valley is popular so the trails in the area will be busy on a Saturday.
I drove the 1/2 mile down the park road to the trailhead and it was packed as expected.  I needed to park about 1/4 mile away. 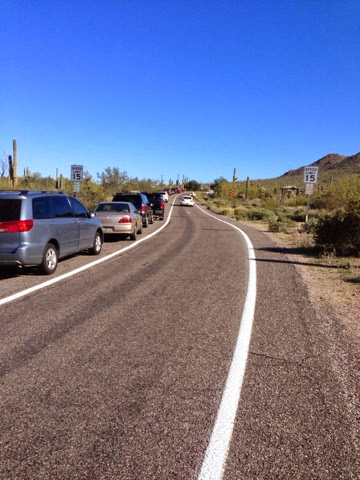 Since I have been hiking I need to push myself more and more for a workout.  Today, I climbed with vigor and passed everyone with my quest for a strong workout.  Well newrly everyone.  I was just about to the top when I hear someone coming up on me running.  I turn to find a 30 something guy with a Red Sox shirt on overtaking me.
I said go Sox as he passed.  Too bad, I had my Red Sox shirt on yesterday.  He didn't have time for conversation with iPod in his ears.
In the picture below that is the parking lot on the right end and the loop road and another parking lot on the left end and every spot is filled.  Of course you will need a large screen to see the details. 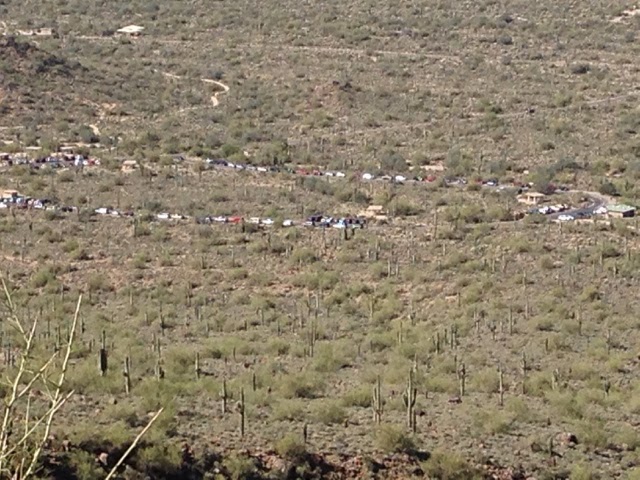 At the top of the mountain I found a spot off to the side to check email and enjoy the climb I just did.  Denise called and her and sister in-law Jayne (Brianna's mom) had just dropped off Brianna at the Manchester, NH airport (MHT).  Breanna had also texted me that she arrived at the airport  They were now off to the new Merrimack, NH outlets and it was time for me to head down the mountain.
One last look at the valley. 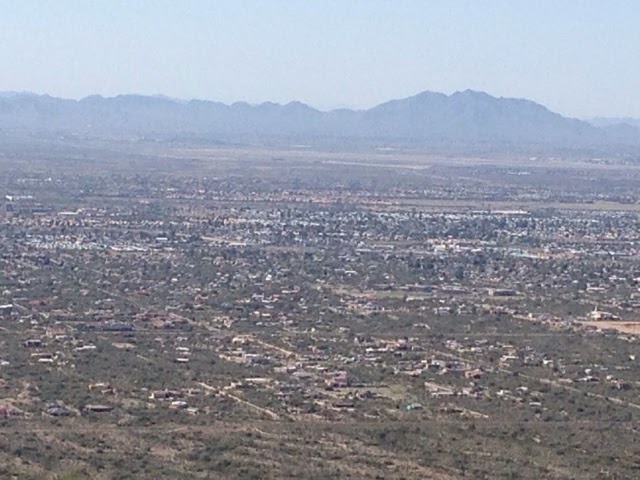 As I said the trail was busy with people coming up and others going down.  At times we were backed up in long strings especially near the top.  Everybody was good about letting faster people go by. 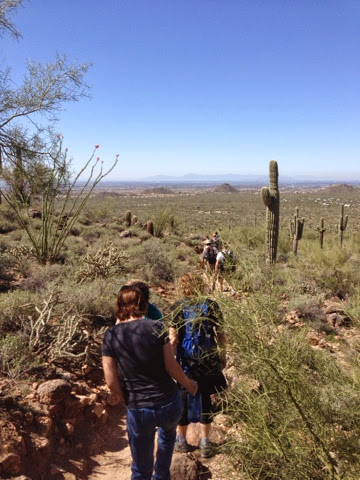 I checked into the Econolodge next to Sky Harbor Airport in Phoenix (PHX) and did some laundry for the week.
Then I decided to go downtown to Phoenix for the evening for my first dining out experience since La Jolla, CA.
I had to walk some distance to get to the closest light rail station.  This is the same light rail I took some time ago when I came through here and saw the Wait Wait Don't Tell Me Show.
By the way Carl Castle who is renowned for his voice at NPR, and had been with the show from its start, retired 2 shows later.  Wow I'm glad I had the opportunity to see him. 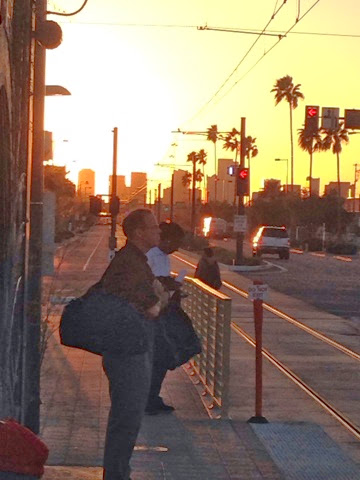 I wore my sandals and I walked too much and hadn't developed any heavy soles on my feet and I started to get a blister on the ball of my left foot.
When I got off the train I went to the CVS store that I looked up with my Google map ap and got some appropriate bandages for both feet as I still had to pick up Brianna and more walking was in order.
I opted to eat at Chipotle as it was in a little square with shops and there was an outdoor performer playing get at and singing to provide some entertainment before and after I ate. 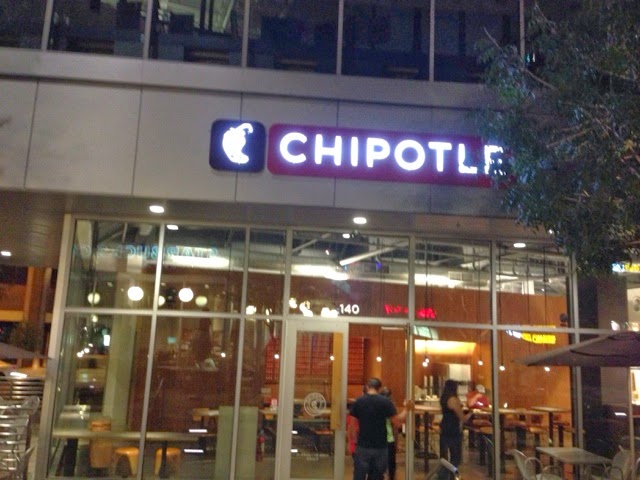 There were very few people watching this guy who wasn't bad and had some interesting lyrics. 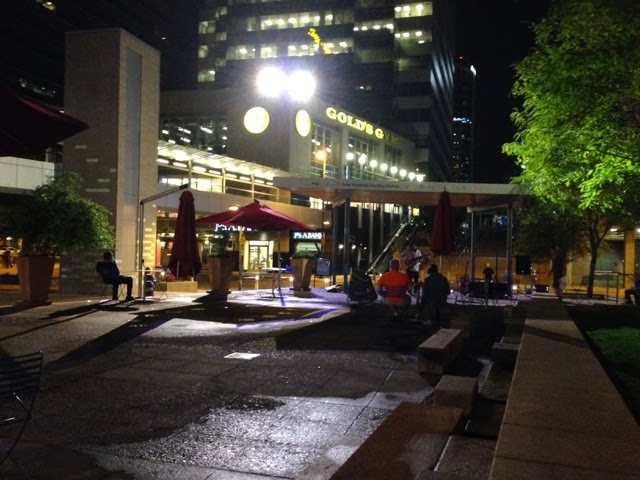 It was getting on to 7:45 and Brianna was scheduled to be a bit early on her landing an hour from now, so it was time to get the train to the next train that goes to the airport
After I got off the light rail system at 44th street you take a series of escalators and moving walkways to an overhead train to terminal 4 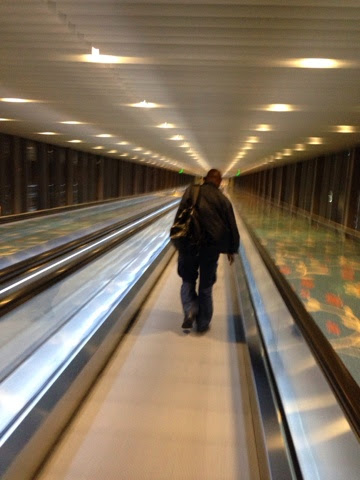 This is the train area for the airport.  Don't have to fight off any crowds. 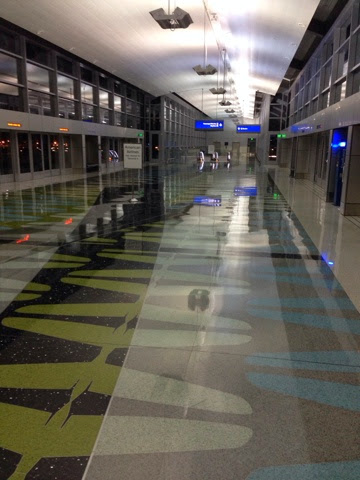 As I said the train takes me to terminal 4 and Brianna is on United and going to Terminal 2.
I have a thing about signage and the signs were great and got me to the departure area of terminal 4 and no more signs.  I had to visit the information booth to find out I had to go down this one escalator to the ground floor.
Then out to the center isle for the bus that goes to the terminals.  A bus came and I got on and then off.  It seems that this bus that says terminals and west parking doesn't go to terminal 2.  Terminals doesn't mean terminal 2 the orphan terminal.  Oh terminal 1 doesn't exist at all don't ask.
Waited for the all terminals bus and got to terminal 2 about 10 minutes before my text from Brianna that she had touched down.  It took 10 more minutes to see her come through security.
I'm a planner and my goal of staying at the hotel tonight had advantages one was that it had a free airport shuttle as I have a camper van and can't park in the parking garage as I am 9' 6" tall.  I didn't want to pick her up on the drive by as u didn't want to not have a spot to park when I got back to the hotel.
I also know from experience that a busy hotel like this has limited space for parking and having an oversized vehicle doesn't help.  When I arrived it was early in the afternoon and I picked my spot, but because of my extra length I had no place to back over a curb with the bike hanging off the back.  I removed the bike and lowered the support arm and parked.  I chained my bike to the tree on the island between the two sides of the hotel. 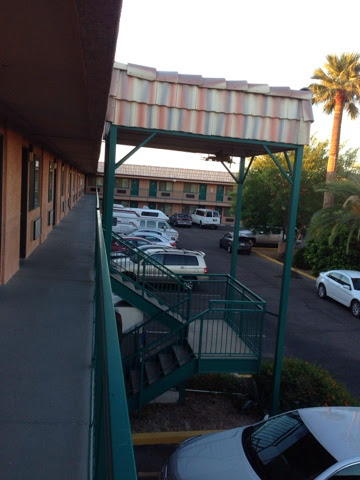 I called the hotel for the shuttle when Brianna had collected her bags.  They said go to the center island and look for the shuttle.  I did just that.  What he failed to tell me that I needed to go out door 8 and take a right and wait there.  I'm just standing with Brianna in the center and no vans were stopping.  I eventually called back and he said the same thing describing the van & Brianna spotted what looked like a van at the far end where we should have been told to go.  Smart girl.
As the driver of the van said they should be telling people to go to the special pickup location as the van stoops and then asks people if they are going to Econolodge.
Oh there is no sign on the island that tells you to go in that direction either.
We made it to the hotel after dropping off people at the offsite parking that tge shuttle runs.
On to Laughlin, NV for Sunday night.