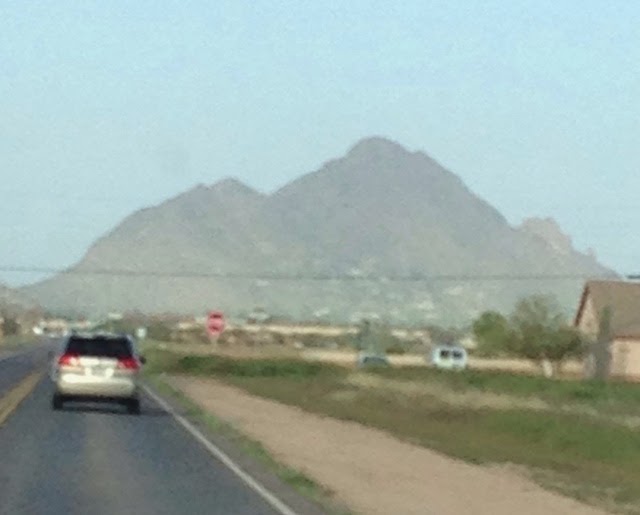 I didn't get on the road early enough (7:30 out of the park) as by the time I got to the Camelbak Trailhead in Paradise at Valley at 8:15 the 50 or so parking spaces were all taken and there were 10 cars trolling for a spot.
Of course my van is long and the bike rack on the back makes it longer.  As long as I can back in over a curb it will fit like other vehicles.  I felt lucky just to be able to turn around and leave as the parking lot is tight.  There was no street side parking in the area either.
Paradise Valley is very protective as their main roads are posted at 25 MPH. 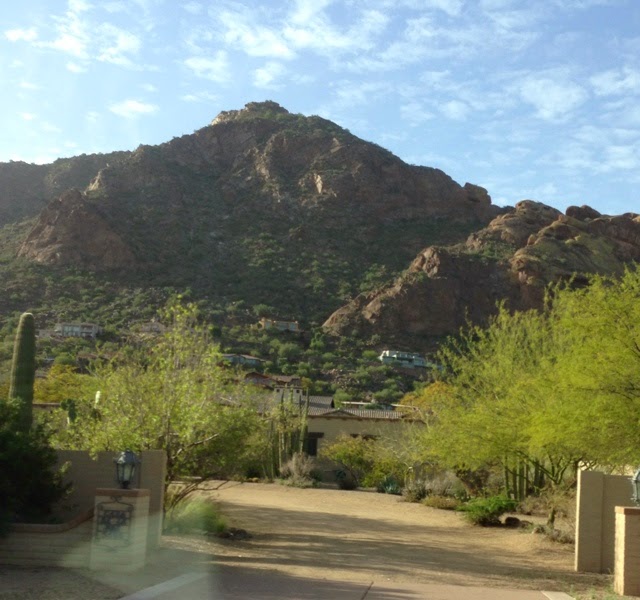 I wondered if I was living a weekday when others were living a weekend.
I knew there were other trails in the area and my AllTrails software showed one on the same mountain but on the other side called Cholla Trail in Scottsdale.
I drove  to Cholla Trail and there is no trailhead parking lot just street side parking.  It appears that others rejected from Camelbak thought the same as me and every street side parking spot was taken.  I thought I found a spot and parked to only notice a "No Parking 6a to 6p" in a tall hedge.  I left frustrated as thecampground  I was at had a moderately challenging trail with 800+ elevation 1.5 miles long and I have driven some distance and wasted time and gas.
I turned my rejection around and found a disc golf course in Scottsdale and got 18 baskets in. 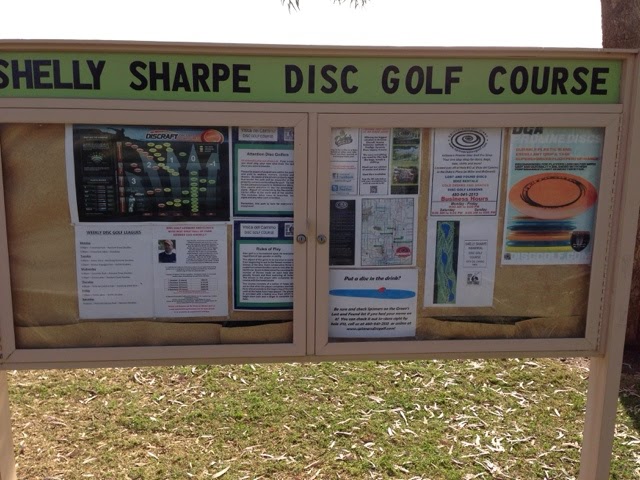 I wish that disc golf made all things right was the whole story but it couldn't be that simple today.
The course was nice and similar to other disc golf courses imbedded in active parks.  It was good that it was lightly used by others not playing disc golf today.  While I was there there were a number of other people playing disc golf too and I got to meet a few.
So this is what happened to me. 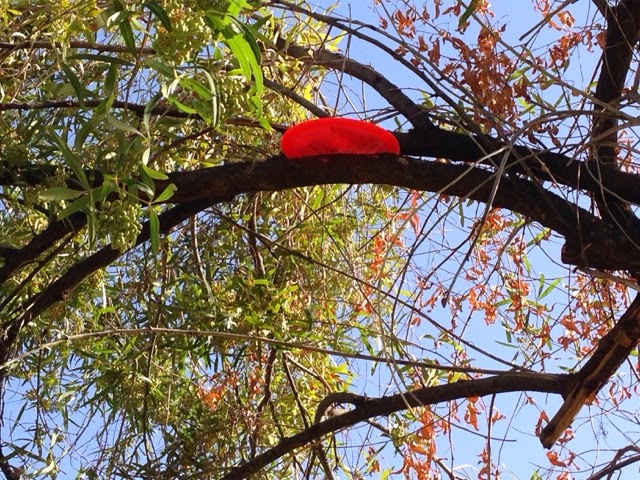 I was a little rusty to start my game having not played in a few days.  I decided to try some changes to my throwing.  I have been thinking of doing that for some time and today was the day.  Rather than only using one finger to front hand toss the disc I decided to use 3 as I was told it would give me more power and therefore better distance.
It worked. My disc flew further about 20%.  On this toss I set it flying so hard it wedged itself between two branches on the tree.  It wasn't sitting in the tree it was wedged.  I tried to get it by climbing the tree but couldn't reach it.  Yup, I was up a tree.  Sorry no one took a picture.  Hey, discs cost $15 to $20.
I had to walk some distance back to the camper and got my expanding walking stick and expanding vehicle snow scraper and duct tape.  My 6ft height and arm totals 8 feet and the stick I made from the two items was about 6 feet and I was just able to get it loose by jumping.
While doing all this a group of 3 men passed me playing through.  I felt foolish to say the least.  There was one guy in the trio that appeared to be in his 70's.  It's nice to see older guys out there playing.  I don't feel so all alone as I do most times playing near all these 30 something guys.  I kept my eye on their playing.  I try to size up others to compare how I do.  They played about average one with a better driver arm than the other two.  They were friendly and nice to talk to.
My problems didn't end with the tree.  There was one basket across water but you have to stay right of some trees and I hit a tree and my disc bounced into the water and it ended out under water about 6 feet from shore.  Luckily I could see it. A guy playing behind me by himself just fished his disc out on another shot and he let me use his disc retriever.
They really do work! 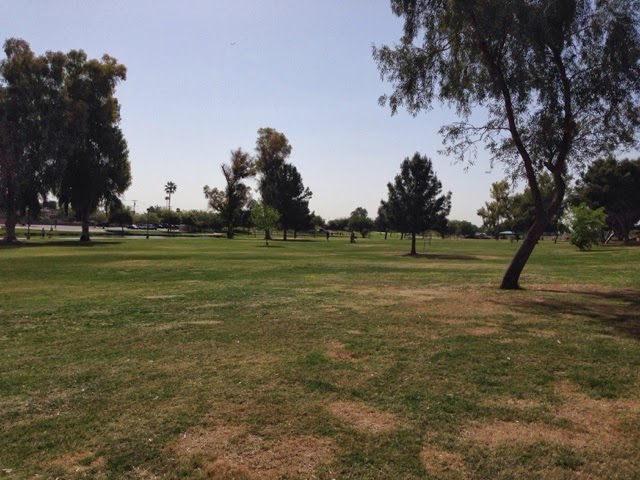 It was a nice course and a good diversion from my failed attempt to hike Camelbak this morning.
After disc golf I had my stop at McDonalds to sync my IPhone phone and IPad then on to Camping World for a part for the camper.  I needed a new cover for my power cord hole in the side of the camper.  A side note.  I brought it back and the one on the camper had 3 holes as does the new one, but the holes are not in the same place as the diameter of the unit is not the same as mine.  I will have to return it and see about trying to find one that is the right size, unless they don't make one to replace my 20 year old camper part an I will have to make this one do.
I came back to the campground I was at last night to check in to the overflow area.  With no sites available I will stay in overflow for $17 per night vs the $25 with hookups I paid last night.
After checking in it was 2:30 and there was time to hike the trail Wind Cave at the campground.  This trail is a good trail at 3 miles round trip and 812 elevation so it is listed as moderate exercise to climb. For me there was no fateague at all climbing it with purpose to push myself.  My hiking had put my legs in good shape.  I need to find a challenge mountain to climb.
The only concern was that there was some weather in the area but most rain evaporated before hitting the ground.  I decided to go anyway as well as others who I found on the trail. 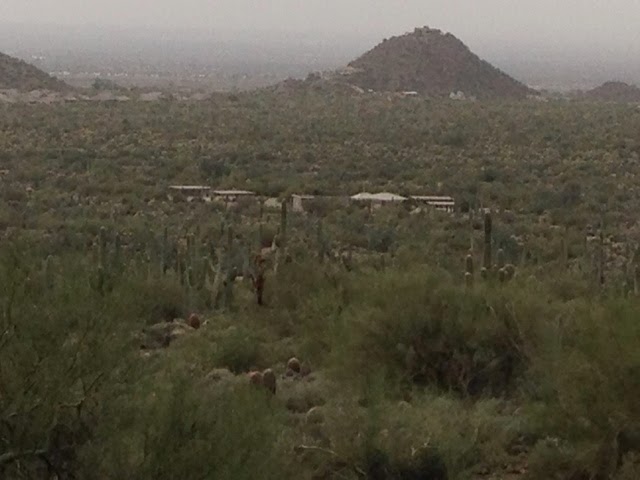 You can see the low hanging clouds with vertigo. 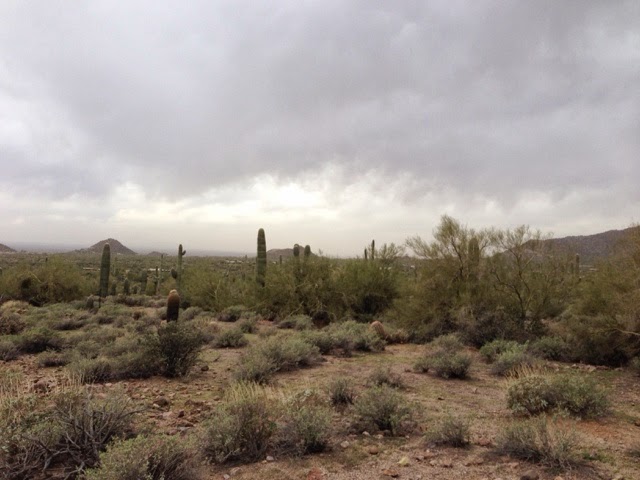 The trail is spotted with cactus of many kinds and desert flowers. 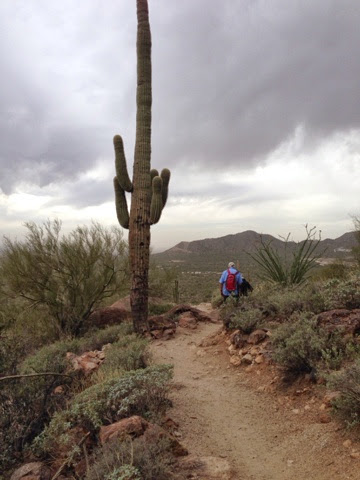 Partway up you can see the Pheonix sign that I mentioned yesterday.  It appears that there is a gun range just below it as you can hear rapid fire from guns in that direction. 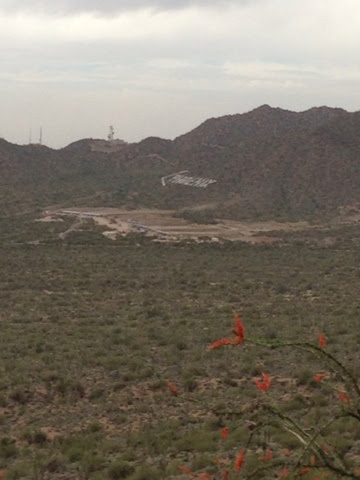 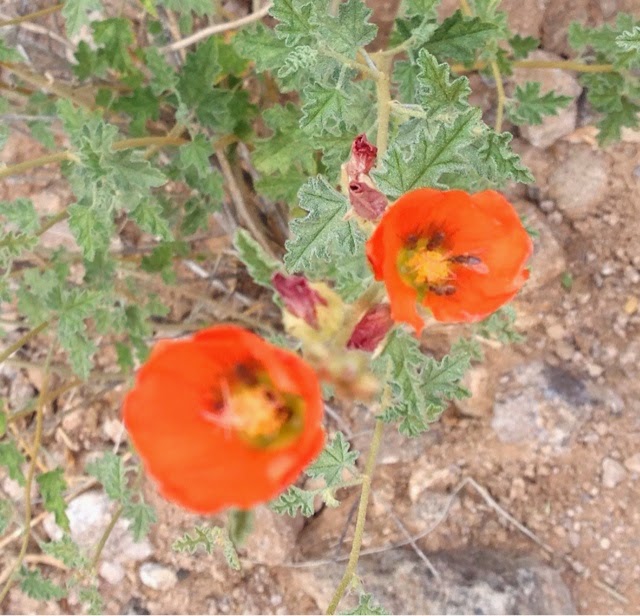 These flowers are almost past blossom. 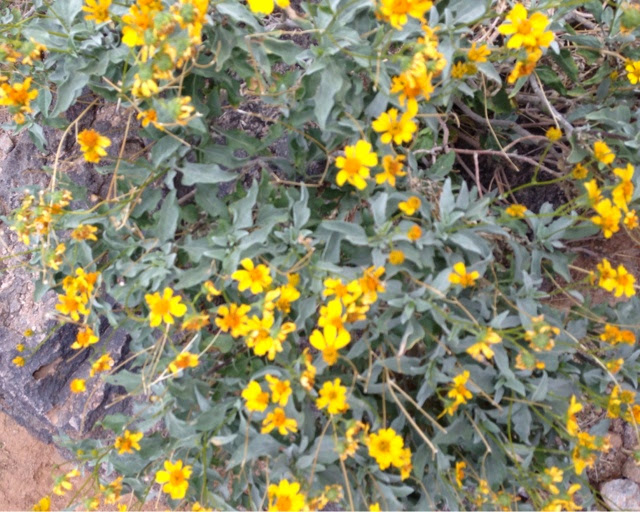 The campground I stayed at last night. 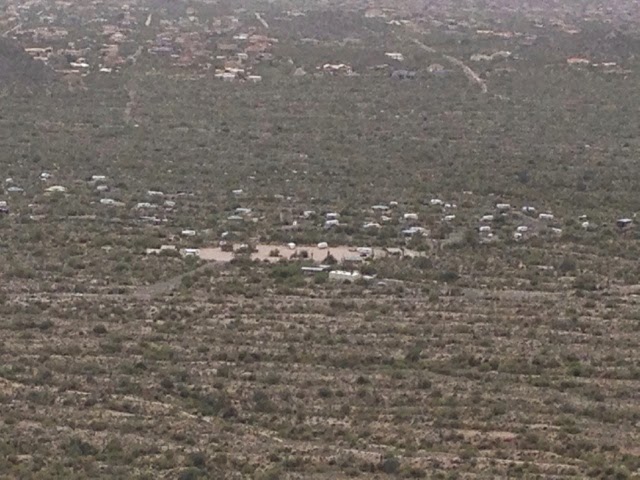 Looking west to Phoenix.  Normally you would see the city. 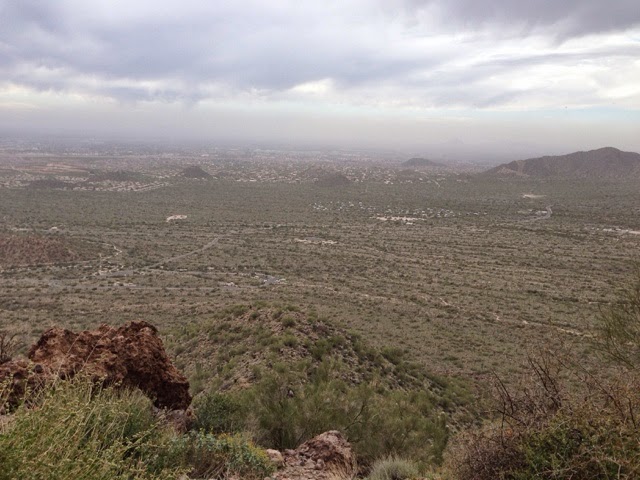 Looking south you can see Superstition Mountain in the distance at Apache Jinction. 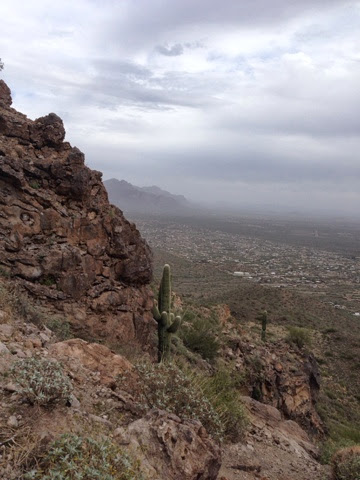 The trail gets rugged near the top. 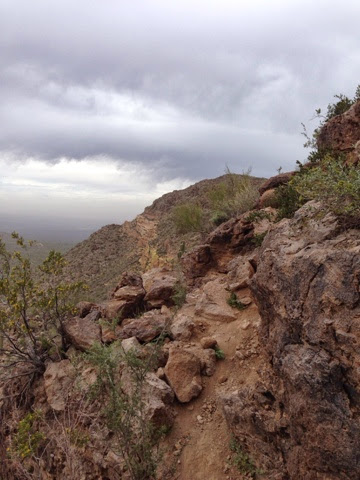 Flowers every turn on the side of the mountain. 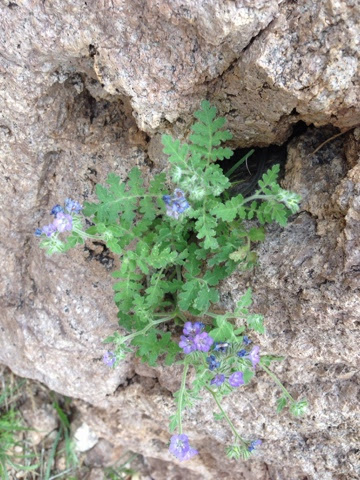 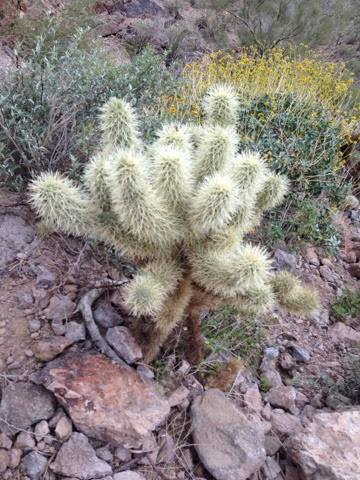 This is Wind Cave 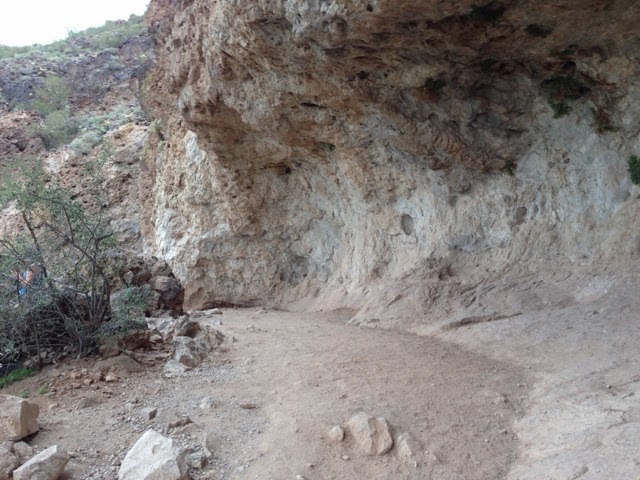 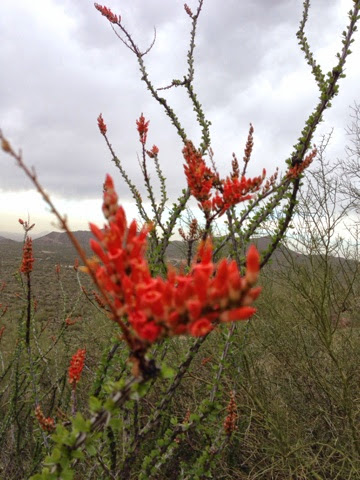 Spring in the desert is beautiful. 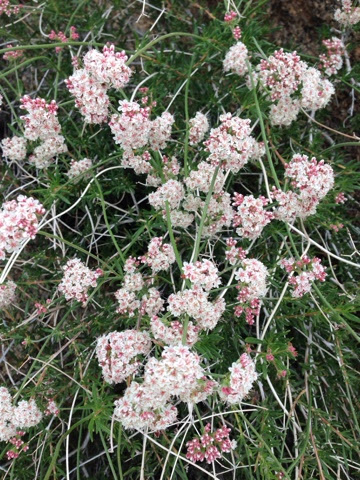 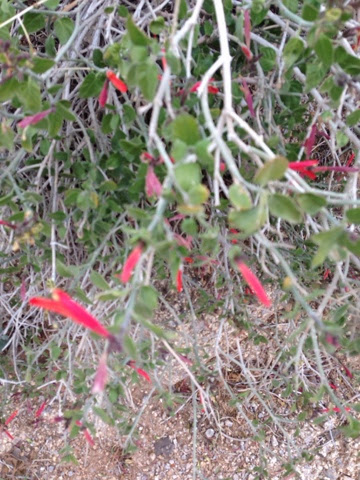 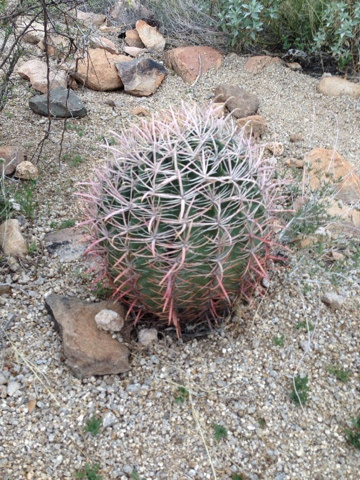 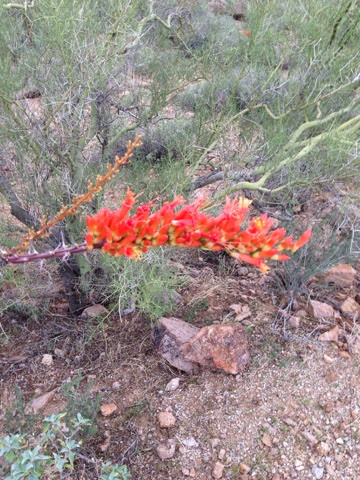 If you get to come to the Sornoran Desert in the spring make sure you take a hike and see all the flowers. 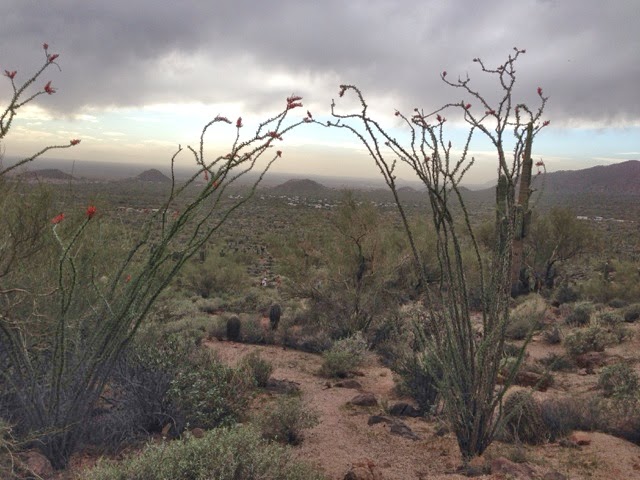 Back at camp it was time to make dinner.  I need to use up my perishable dinner food by Saturday as Brianna, my niece, comes in to be with me for the week and se will spend the first few days in hotels that I booked at casinos at drastically discounted rates, and I am not going to run the fridge on the camper while it sits on the parking lots.  We will stock up with food when we leave Las Vegas for the Grand Canyon.
Tonight was cooked chicken & salad.
Then it was time for my sunset pictures.
I got the camper, saguaro cactus, and moon in this shot to the east. 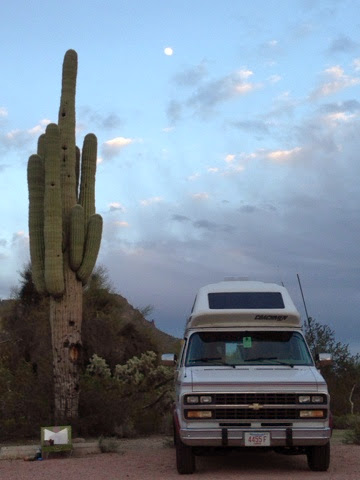 This is one of the least colorful sunsets of late but the beautiful desert wildflowers make up in the color department in today's blog.
The overflow area with others.  Although we are separated by some spacing everyone that went by were friendly and one man from Minnesota stopped and said your a long way from home.  I have heard that a lot on this trip.  We talked about the area for awhile.  He has been coming back here (this area) with his wife for 10 years.
I meet mostly retirees at the campgrounds and younger people in the trails. 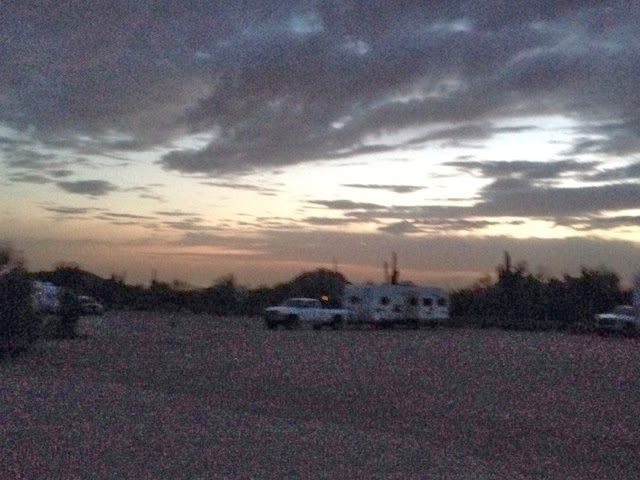