Heading north on the west coast doesn't have the same meaning weather wise as it does on the east coast.  I traveled about 300 miles north today to Oceano, CA.  There was only about a 5 degree lower temperature for daily high and lows here vs. San Diego.
I am heading north as it appears that son Clayton, that I was visiting his family in La Jolla while he is deployed, will be moving to Monterey, CA to attend school for two years as his assignment for the Marines.
I wanted to go to Monterey to check it out as we will be going there to visit them in the future.  We will miss San Diego as will Clayton and his family but being in the Millitary means you go where you are assigned.
The good news is that Monterey is supposed to be a very nice place to live and during his time there he shouldn't have to travel away from his family for months as he has had to do in his current assignment in the flying unit he has been in.
Today is another wet day in San Diego but the storm is near its end.  Although wet getting started and having to drive through rain on way to Los Angelis, the weather got better on the way north. 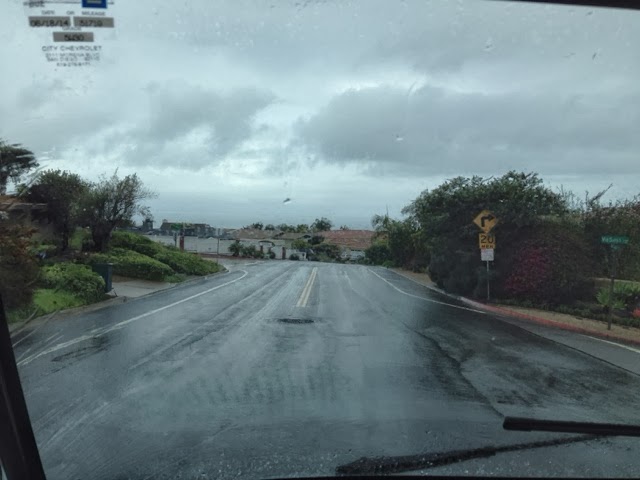 Denise called me as I drove through down town LA on the 101.  I used to fly to LA often when I worked for Digital during the early 1980's, and have been back many times. So I know the city well.
Denise reminded me if the Oscars tonight  when I was just a few miles from the Grauman's Chinese Theater now TLC Chinese Theater.
Downtown LA from the 101 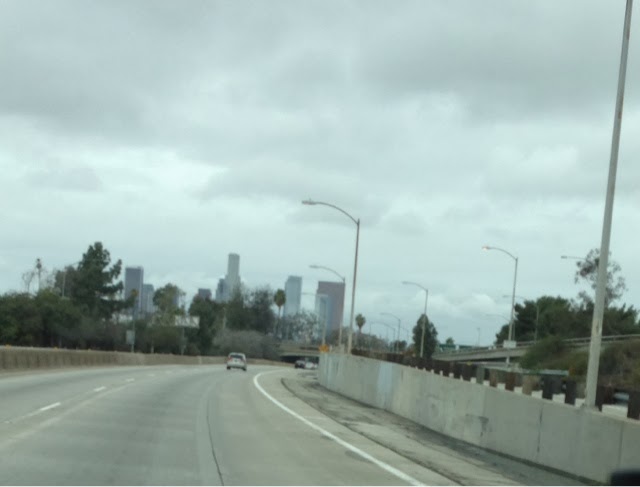 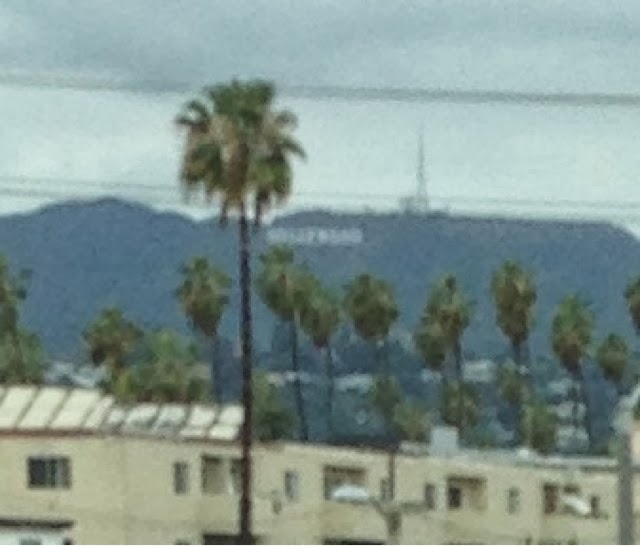 Every time in drive through LA it brings back great memories.  I was there so many times for work that when others came with me I was the tour guide.
I continued up past the Holloywood Bowl, Universal Studios, and on to the Ventura Freeway to the coast.
Then up the coast to my night's stay at the County Campground at Prismo Beach in Oceano, CA.
I checked in without a reservation and there was no problem as there were many open spots here and at the nearby State Park being off season and weekday. 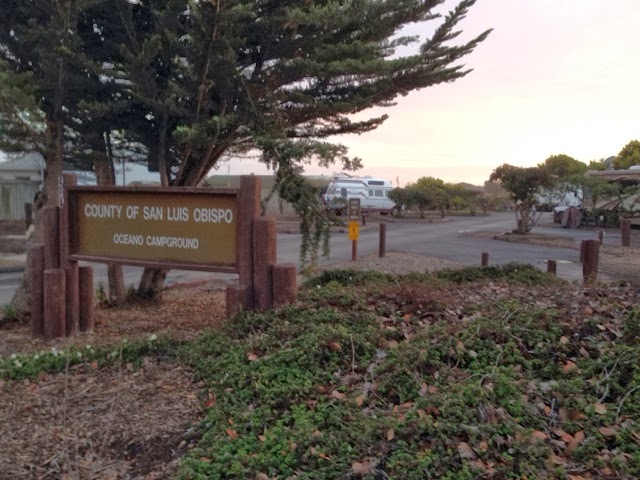 When I checked in the woman said it would be $45 and since I was staying 2 nights and knowing the State Park was $40 per night I was going to pass.  Just as I concluded the conversation to say thank you and move on she said that they have a small area in addition to the big one near the State Park and the beach and since it didn't have cable TV it was $35 a night.  I told her that I didn't need cable so I took it.  (After setting up I picked up 18 TV stations with my antenna setup and could watch the Oscars. I didn't need cable.)
I went to the campsite and checked it out before going grocery shopping as I did go out shopping last evening.  I found that they had 50 amp electrical service and I have a 30 amp plug and no adapter.
3 prongs don't plug into 4! 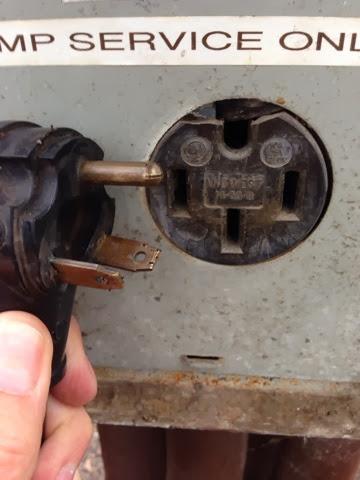 I kicked myself as I have been in Walmart before to buy the 20 amp to 30 amp and pased over buying the 50 amp to 30 amp adapter.
They have a Walmart in town so I went and this adapter was sold out so I went bsck to the campground check in and the woman said they only have 50 amp services at their sites and gave me advice where to drive to get an adapter.
There was a private campground a mile down the street that had a store and they had the adapter.  The one they carry is very elaborate vs the Walmart version.
Here is the size of the 20 amp to 30 amp adapter that Walmart sells and it doesn't cost that much. 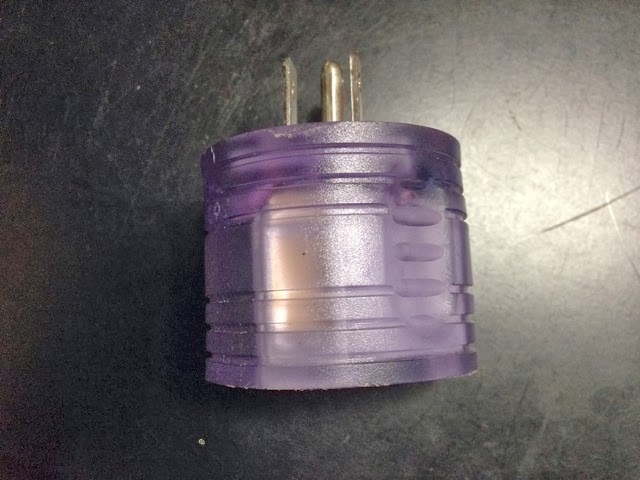 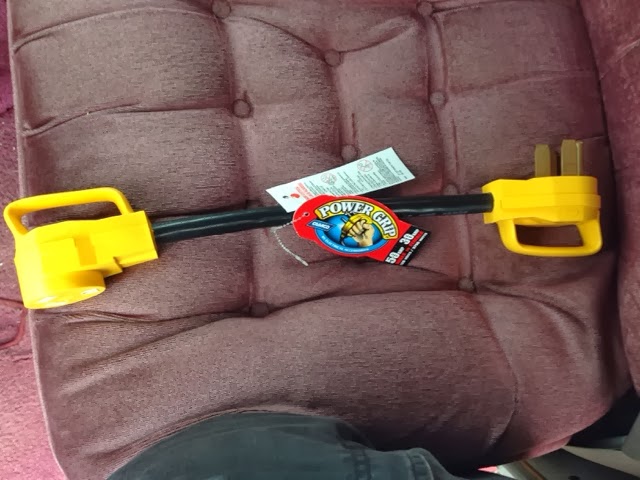 It is very well made but elaborate and pricy at $30 for my needs.  In any case it will be in the 40's tonight and this will allow the HVAC to keep the camper warm.
I then went to Von's grocery store to stock up on food and to call Denise's cousin and wife that live in town and left a message to let them know I made it and would like to meet if they have a chance.
By the way bring bags to this Von's as no bags you need to buy a paper bag.  They must have a law against plastic bags.
After cooking dinner I walked to the beach at the end of the street.
I was provided with some excellent sunset photos. 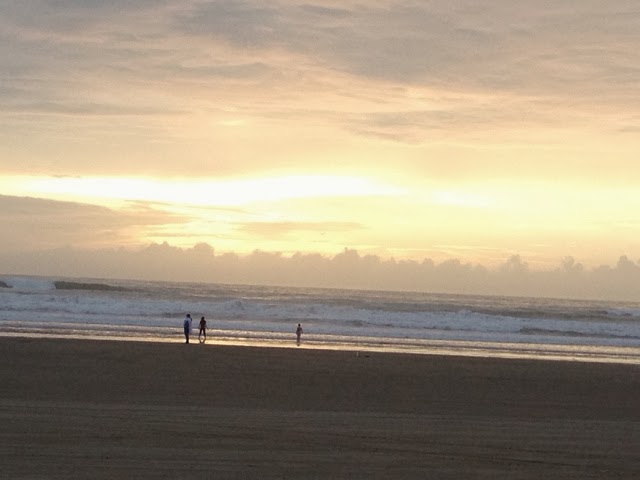 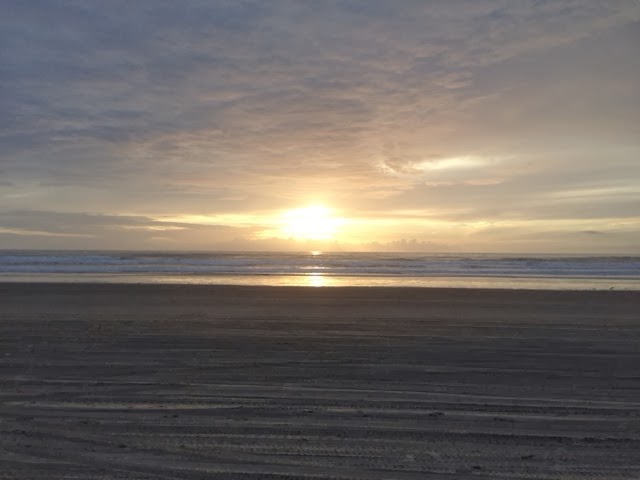 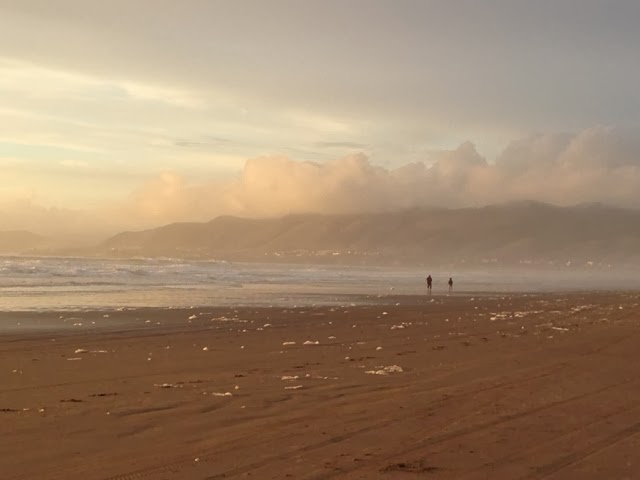 The State Parks run a campground on the beach here.  You pay and get a permit and drive out on the beach and camp.  Didn't want to try this with my camper and get stuck with narrow tires. 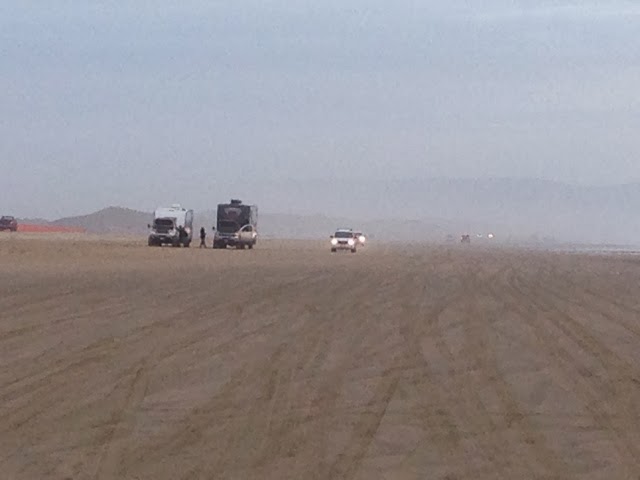 Tire marks in all directions. 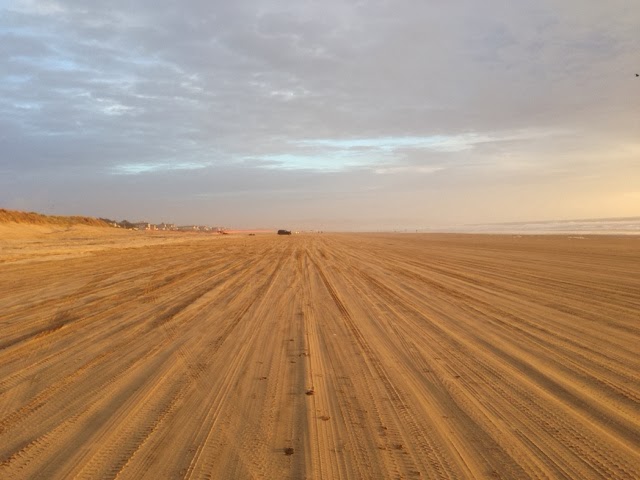 In my opinion I got a better campsite location and paid less to have more, just not get cable.
Posted by Brent’s Travels at 9:03 PM